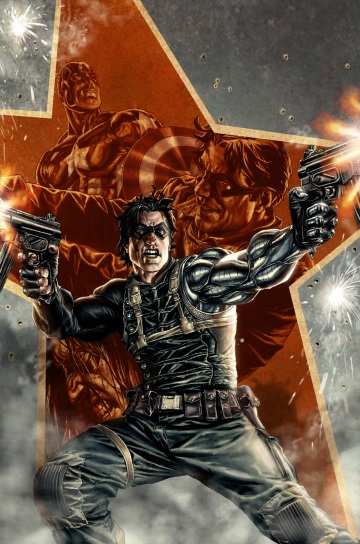 A new #1 starts for Marvel that has Bucky dealing with his past.

There is quite a bit I can say about this issue that frankly, I’m not sure where to start.  Guess I may as well just pick a point and go from there.  The story is solid, the narrative by Bucky gives some good detail into his past as well.  Parts of this even give off the feel of an older spy story despite the action and this being part of Bucky’s past coming back to haunt him.  Ed Brubaker’s work is really quite solid here, though this issue is paced a little slow for my liking it at least ends on an interesting note.  One I at least believe will hook readers more attuned to some Marvel things than I currently am.

My feeling for the art is rather mixed.  Butch Guice’s art colored by Bettie Breitweiser seem like a nice team up.  It has an almost realistic look to it and the darker shades really seems to match well with the tone Brubaker set.  Still, I will admit that save some scenes, it just did not sit well with me.  Beyond saying that its simply not a style I particularly enjoy though, I can’t really state why I’m just not a huge fan of the artwork here.  Well, save a couple spots that I at least found confusing – those dealing with Bucky’s left arm that I almost hope some Marvel fan out there will comment and give me some answer for beyond it being an error.  Basically at the start, his arm is bionic, midway through it seems to become a normal arm, then goes back to being bionic.  Unless I’m told otherwise, I’ll be assuming its an error and one that does not sit well with me.

Bottom line:  While I have mixed feelings on this issue as a whole, I at least will be waiting for the second issue to hope the story at least picks up some pace or otherwise draws my attention more.

One thought on “Review: Winter Soldier #1”