Jimmy Palmiotti and Amanda Conner team up with, uh, basically every major artist still speaking to DC for a blessedly playful introduction to their upcoming Harley Quinn series. 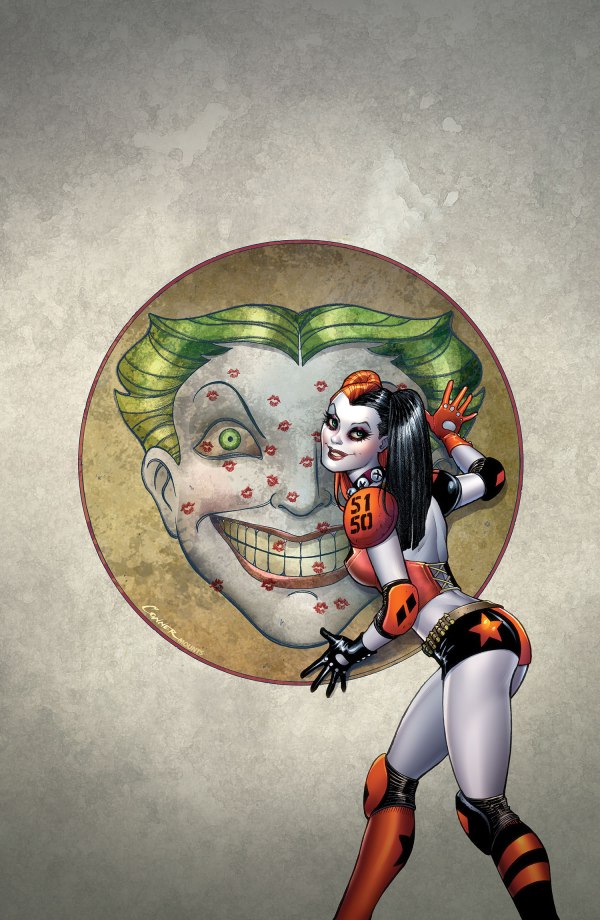 Harley Quinn was more damaged than perhaps any other character in the DC Universe (give or take a Jaime Reyes) by the DC Universe ‘soft reboot’ in the New 52.  While Harley’s always had a dark, seductive edge, the New 52 stripped her of all her subtlety and most of her clothes, turning her into a vaguely ridiculous facsimile of one of DC’s most iconic female characters.  Bits and pieces of the old Harley have resurfaced periodically, but by and large, Harley went from the Clown Princess of Crime to another bland merry murderess in a corset and boy shorts.  It was an abysmal redesign.  Now, however, Jimmy Palmiotti and Amanda Conner are taking over and steering Harley Quinn back towards being her own thing, a process that starts in the cluttered-but-playful Harley Quinn #0.

END_OF_DOCUMENT_TOKEN_TO_BE_REPLACED

Marguerite Bennett lands on a brilliant concept for a “Zero Year” tie-in, but the execution leaves a lot to be desired. 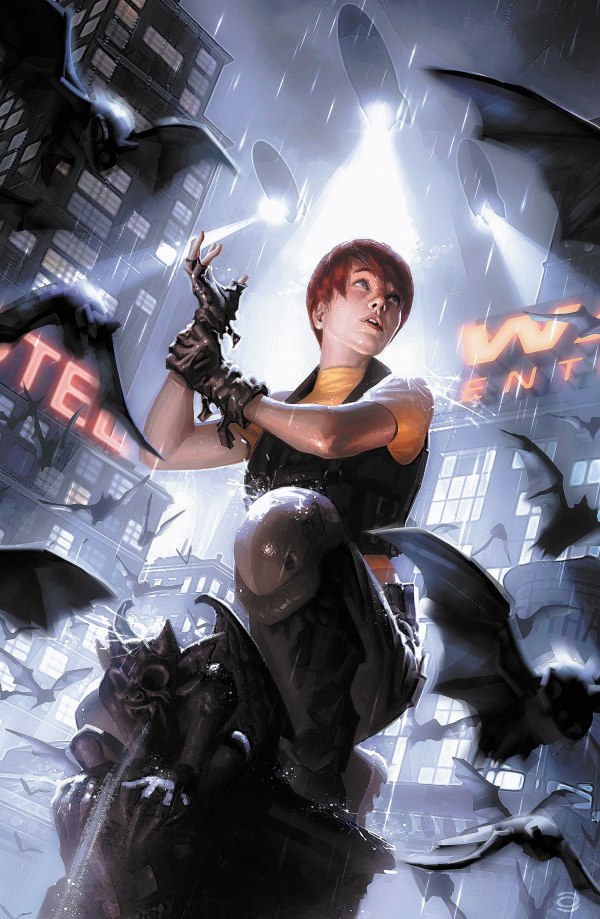 END_OF_DOCUMENT_TOKEN_TO_BE_REPLACED

The Movement is a book I badly wanted to love.  One of the few truly new ideas to emerge from the New 52, it had pretty much everything I look for in a monthly comic, at least on the surface.  It had a fantastic premise – superpowered teens fight corruption and wage class warfare – that was extraordinarily relevant to modern society, a diverse cast filled with mostly new characters, and a dedication to building a strong sense of place in Coral City.  But The Movement has failed to connect with readers (myself included) in a way that’s rare for writer Gail Simone’s work.  Where did it go so wrong?  END_OF_DOCUMENT_TOKEN_TO_BE_REPLACED

Forever Evil, DC’s massive post-summer event, improves on an awful first issue with a passable second one, but its problems still linger. 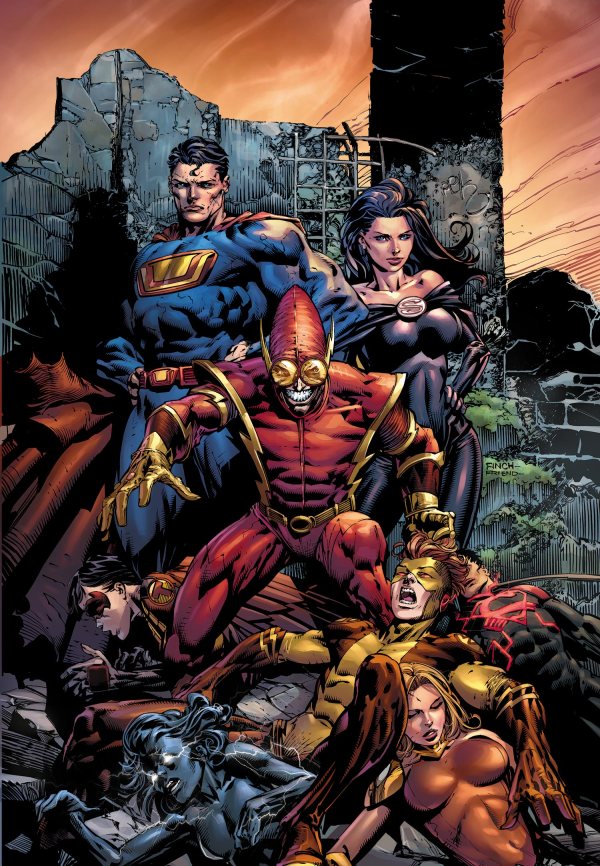 END_OF_DOCUMENT_TOKEN_TO_BE_REPLACED

I wanted so badly to like this book, but to no avail, because it’s pretty bad.

END_OF_DOCUMENT_TOKEN_TO_BE_REPLACED

Ales Kot joins as the new writer in Suicide Squad #20, and he brings a little sophistication to a sluggish title. 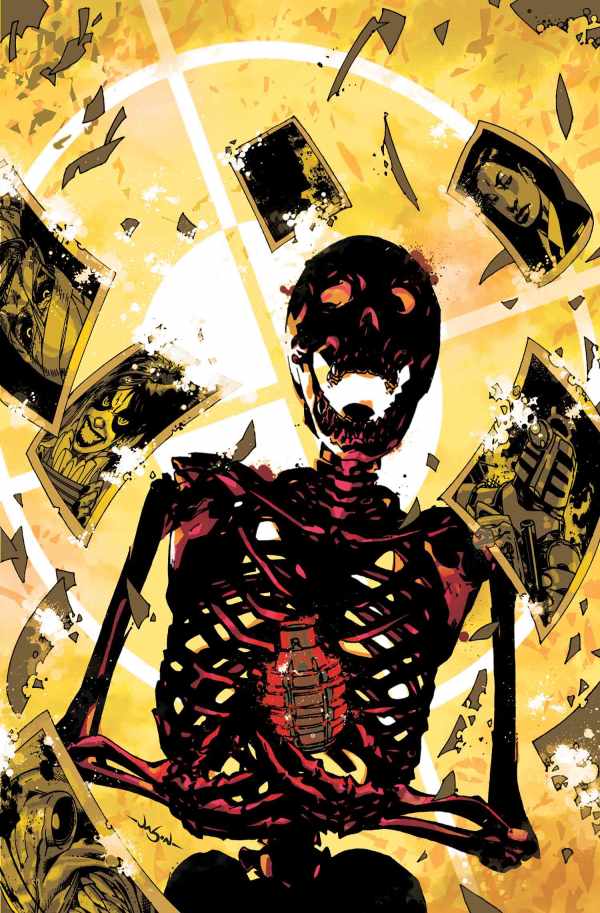 One of the New 52’s best books closes with a whimper rather than a bang, as a rushed conclusion leaves little room for the book’s incredibly strong supporting cast.

Gail Simone has long been one of DC’s best writers, but her New 52 Batgirl run has been troubled at best. While Batgirl: Knightfall Descends remains deeply flawed, it is nevertheless a huge step in the right direction for the troubled title.

If there was one person who could save the idea of ‘Babs as Batgirl’, it was Gail Simone. Gail had years of experience writing Barbara Gordon, more experience than virtually any other comic writer still regularly working today. She was extremely familiar with the Gotham City crew, and she’d been writing dark action comics for years. Gail Simone was the perfect choice for the New 52 iteration of Batgirl. But her run has been divisive at best, though perhaps with the way DC treated fans of Steph and Cass that was always bound to happen, and reviews have generally been tepid.

So, where did it go wrong?

Brian Azzarello’s Wonder Woman #19 slows things down a bit to give us a character-driven issue that nevertheless manages to show why this is DC’s best book. 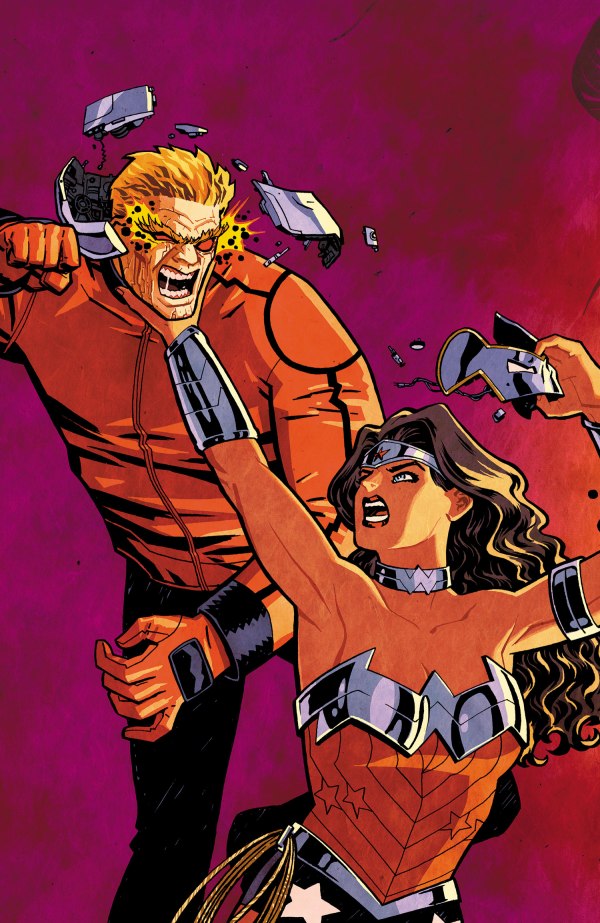 This week in comics, Saga #5 finally exists just in time for Saga #6 to come out, I completely forget to pick up Avengers Vs. X-Men, and Rorschach gets the impossibly bland mini-series you always hoped he’d have. 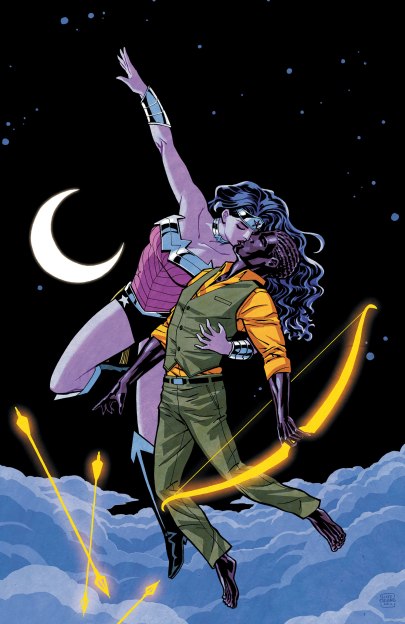 This cover, though lovely, has absolutely nothing to do with what’s in the issue? And what, you ask, is in it? Azzarello’s best 20 pages on the title to date.

END_OF_DOCUMENT_TOKEN_TO_BE_REPLACED

Suicide Squad: Kicked in the Teeth

Though I found the opening issue of Suicide Squad to be something of a guilty pleasure, I quickly found I wasn’t alone in my tentative praise of the book.  Though I didn’t pick up the second issue, Suicide Squad‘s reception was relatively positive, and when I learned that it was the first New 52 title to break the inevitable downward sales trend and action start selling up – for the curious, it’s picked up about 4,000 steady new readers since February – despite not having any crossovers, I was interested to see what the book was all about.

END_OF_DOCUMENT_TOKEN_TO_BE_REPLACED 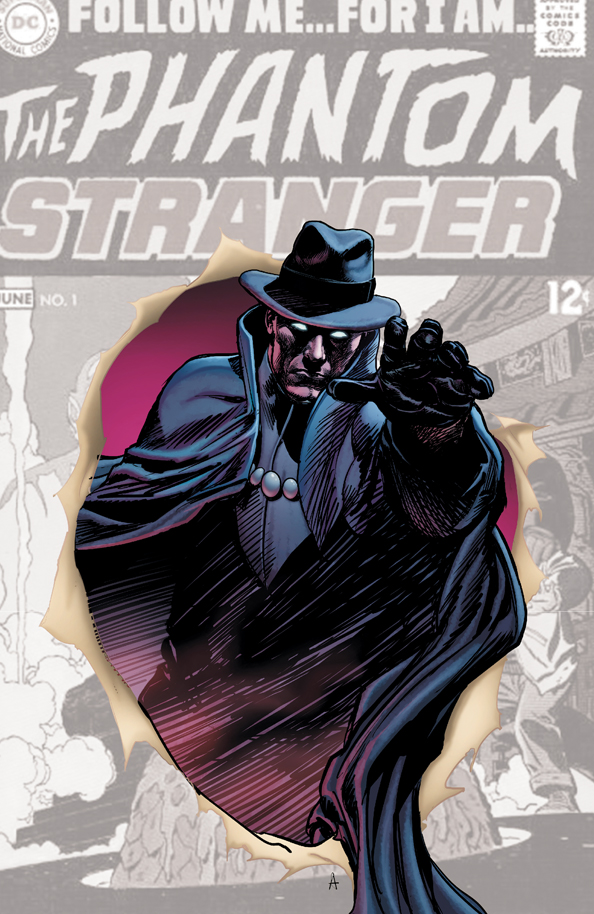 He’s coming… to CANCEL YOUR BOOKS!

So, last Friday, DC announced four new titles for their New 52… and DC fans know what that means: four titles have to go on the chopping blocks.  And after the VERY surprising announcement a few weeks back that Justice League International would be the first of those four cancellations, DC has finally announced what the other three books leaving us will be.

Just like last time, I want to talk a little about the books that will be disappearing, as well as what we can expect from the new titles.

END_OF_DOCUMENT_TOKEN_TO_BE_REPLACED

This week in comics, DC’s attempt to cash-in on Watchmen 25 years too late (and a few years too late for the film) begins with Before Watchmen: Minutemen, Boom! launches some a pair of new ongoings, and Morrison kills Clark Kent, that bastard!

Swamp Thing #10 wins this week’s award for Most Misleading Cover, ignoring the book’s creepy imagery and muted colors for a bland-looking fight that doesn’t actually happen. It also wins the award for Molestiest Cover, unfortunately.

END_OF_DOCUMENT_TOKEN_TO_BE_REPLACED

This week in comics, Marvel breaks ground in Astonishing X-Men #50, Justice League Dark gets a new writer and a new sense of purpose, and DC continues to beat up on owls, like, everywhere.

END_OF_DOCUMENT_TOKEN_TO_BE_REPLACED

To the surprise of… well, everyone who is paying any attention at all to sales charts, DC has a seventh canceled series of its New 52 relaunch: the mid-selling, semi-popular Justice League International – a particularly baffling decision given that fully half the company’s line is selling less than it.

According to Dan Didio in the DigitalSpy article above, the reasons for the cancellation are: “It was selling okay, but we had greater expectations for that line. There’s a lot of those characters that I feel we’ve told a lot of stories with, so at this particular moment we’ll give the title a rest, and maybe give some of those characters a rest.”

Because I have nothing better to do, let’s talk about what this means a little…

END_OF_DOCUMENT_TOKEN_TO_BE_REPLACED

There are a few books I gave up on within an issue or two of their launch, not because they were bad books, but because there was an overabundance of books I was more interested in, and I just don’t have the money to support every single title I see.  Dan Jurgens and Aaron Lopresti’s Justice League International was one of those books, and with my nostalgia factor never higher (thanks, classic JLI hardcovers!), I thought I’d give their first trade, “The Signal Masters”, the shot I denied the title in single issues.

END_OF_DOCUMENT_TOKEN_TO_BE_REPLACED 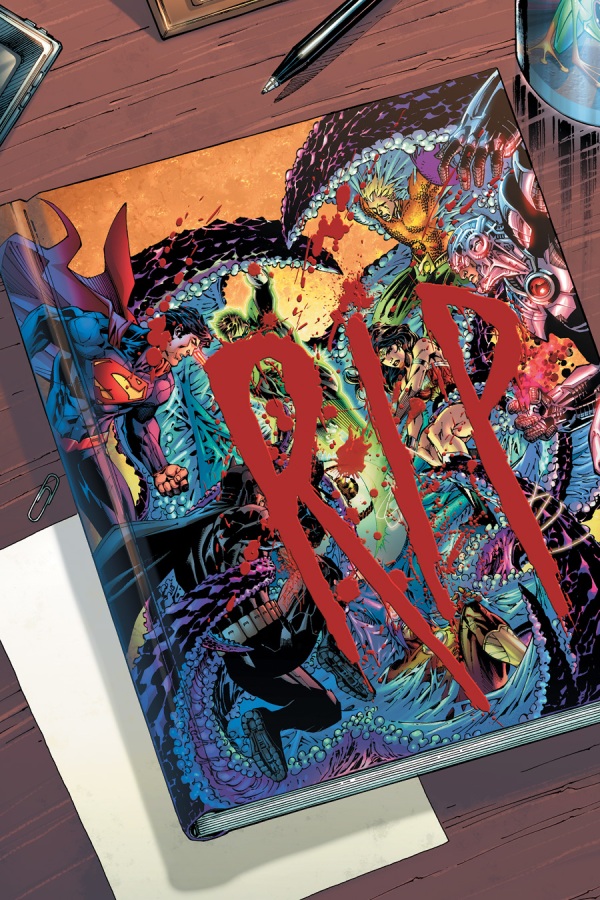 Like just about everyone else alive, I (for no discernible reason) am absolutely convinced that I know better than the myriad writers and editors at DC Comics, that my take on the New 52 would have been flawlessly executed, that all the mistakes they made – and I don’t think it’s any great revelation that massive, avoidable mistakes were made in the course of this enormous, ambitious project – could have been turned around if only they would have trusted me.

Which is stupid, of course.  The comic marketplace is a vastly different place than it was even ten years ago, and outside of seriously stepping out of comic shops and back into supermarkets (with the resulting drop in price and increase in age-restricted content that implies) they were never going to get their comics into many new hands… and I’m pretty sure that isn’t a feasible goal anyway.  No, they did a lot right, including the very necessary move to increase digital publication.

But one possible mistake they made that I think would be very fixable is in how they handled some of the relaunches.  Angry fans can and will claim that DC never gave their favorite canceled title a shot – though the relative dearth of this sort of outcry thus far suggests that DC picked the right titles to cancel quickly, and I’d bet the next cancellations will be met with similar silence – but, realistically, they were treated exactly the same as the rest of the New 52, given promotion, in-house ads, equal shelf space, etc….  DC treated Men of War and Batman roughly the same – and that, in my opinion, is the problem.

END_OF_DOCUMENT_TOKEN_TO_BE_REPLACED

Demon Knights #8 gives a fascinating, not-entirely-trustworthy backstory to two of its most interesting characters. 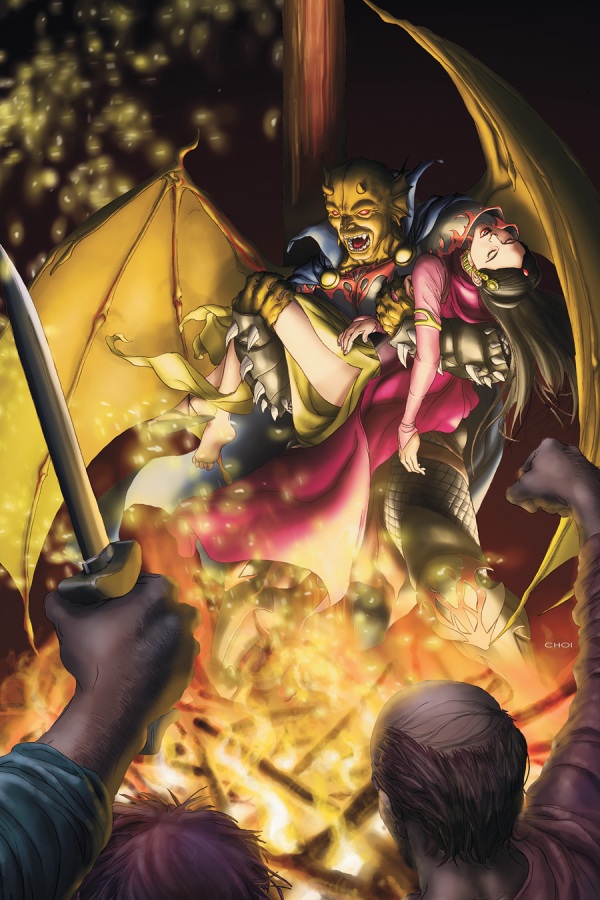 END_OF_DOCUMENT_TOKEN_TO_BE_REPLACED

Green Arrow #1 was my vote for Worst Comic of the New 52.  It was also the first book I dropped.  I thought I’d be writing off Green Arrow for the foreseeable future, but after a few issues, DC decided to change up the creative teams on a number of titles, Green Arrow included, and with new writer Annie Nocenti (a respected veteran writer of the 80’s and 90’s) coming in with #7 to shake things up, I thought I’d pick it up and see what she was bringing to the table.