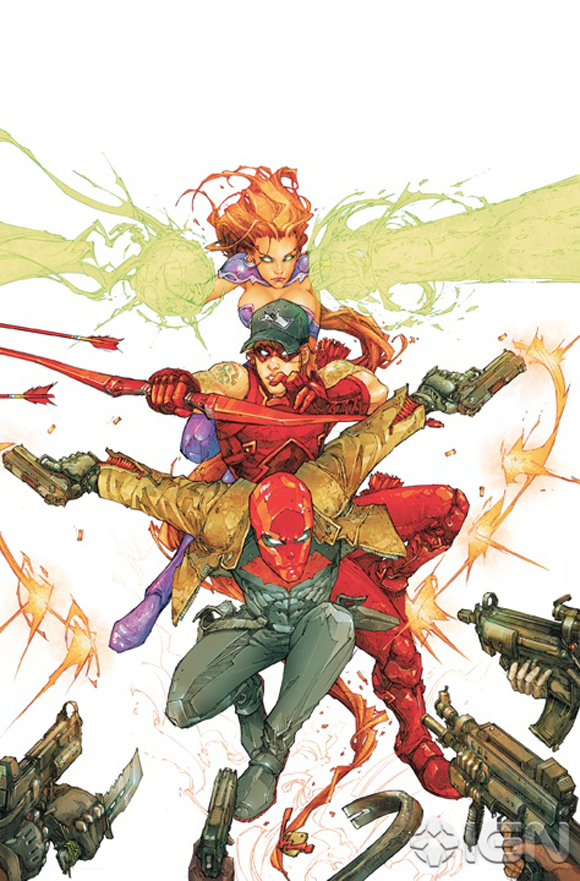 Wow is about all I can say on multiple levels…

So we start with Harper being in a Qurac prison and one bad ass escape plan by Jason Todd that soon has bodies piled up everywhere.  And this is just amazing.  And when the tanks come in, Starfire shows up and Jason’s inner monologue does a pretty good job of explaining why she is there.  Oh, and I should mention that if you thought Starfire’s pre-relaunch costume was revealing, well it is nothing compared to this new version.  Things really start to tumbled down into a much other “wow” from here though… Or maybe “WTF” would be better to describe this.

Starfire is soon asking Jason if there is anything else she can do for him.  Literally in such a way that makes me want to strangle Lobdell to make Starfire like that.  Literally he reduces a pretty amazing character like Starfire into a completely mindless bimbo who apparently is a giant slut.  Really, Lobdell makes her seem really dependent on Jason for guidance on what to do except I guess when it comes to who she sleeps with.  In that case she is then (and right now it seems only then) capable of her making up her mind for herself.  And… well just wow.  Despite too having ties to Roy and Jason knowing her, Starfire has no memory of Dick Grayson or anyone and the only explanation is Jason stating “Tamaraneans don’t see humans as much more than sites and smells.  And they have a terribly short attention span about all things Earth.”  I really want to say a lot more on this but I just don’t know how else to go about it than what I already have, so I guess I’ll just leave it at that.

I will at least move onto another bit: Jason Todd.  Though I generally liked how he was portrayed, there are a couple things I want to point out.  First, he is back to having black hair when he at least use to be a natural red head.  I kind of wish he was kept with red hair but I can’t really state if this relaunch changed him to having naturally black hair or if he just went back to dying it.  More so, his outfit has a freaking Bat logo right along the chest!  After reading an interview on Comic Vine with Lobdell, I was under the impression that Jason would have a lot less dealing with Batman and Gotham and a lot more.  I don’t know, maybe I read into things on that, or maybe Jason having a giant bat symbol on his chest somehow doesn’t tie him right to his past life.  Oh, and I somehow innitially missed Batman’s symbol in the Os on “Hood”.

Despite my negative feelings towards this though, I’m still kind of wanting to read more.  In part for I’m hoping like mad that he’ll give some actual explanation to why Starfire turned into a giant sex crazed bimbo.  Mostly though for if things stay the way they are (great banter between Roy and Jason along with lots of violence and tons of images of Starfire being scantily clad and even nude mainly), well I can see this becoming a really guilty pleasure of mine.

—Is Starfire a Bimbo? Another blogger’s look at Starfire’s portrayal!  I recommend reading it as well as the comments for a full view of our different takes on Lobdell’s portrayal of her.

—Starfire in Red Hood and the Outlaws #1  Me taking a closer look at Starfire’s portrayal after a slight talk from one of my college professors.