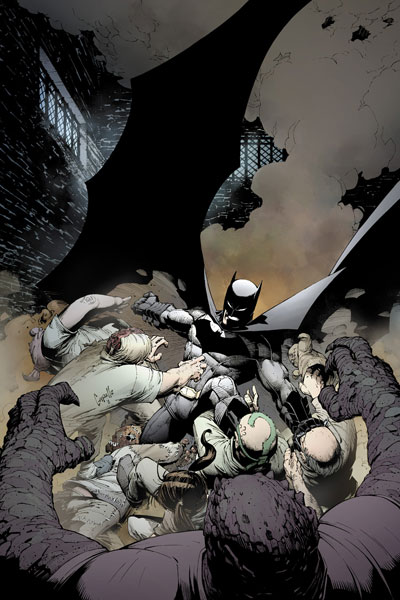 Scott Snyder, who finished up Dick’s run as Batman in Detective Comics, is now working on Batman #1.

Scott Snyder, I generally applaud you here.  He starts off getting Batman’s general view of Gotham out while tossing him against a large group of his foes, not to mention a couple that were Dick’s as Batman or at least otherwise giving them a quick nod.  Though I do have to say his portrayal of the “Joker” is a bit odd.  Some comments on Daniels’ Detective Comments #1 was that he was channeling a bit of Nolan’s rather recent Batman films – especially in the Joker.  Well I did feel slightly put off a moment by Snyder taking that even further by having the “Joker” state “aw, always so serious” which seems clearly a nod towards the movie’s line “Why so serious?”  Not to mention Capullo’s take on how the Joker looks appears a lot like Ledger in the role.  Despite this, it was fun and interesting to see the “Joker” actually helping Batman.  But then, it should be rather clear seeing how the “Joker” fights that it really isn’t him.

Now sorry if quoting the Joker’s name like that got on people’s nerves, but I did it for soon we find out it really wasn’t the Joker by Grayson wearing a rather impressive piece of new equipment that made him look like the Joker so he could stake out some things in Arkham.  Something Dick has a little fun with back in the cave before taking the mask off so him and Bruce can join a fundraiser Bruce had going to help rebuild basically all of Gotham.  During this event we do get to meet a new character running for mayor, some old characters, and of course Tim and Damian as well.  I will say now while I was generally impressed by Greg Capullo’s art that seemed to have a slight nod in it to older comics like “The Dark Knight Returns” I wasn’t really for how he drew Dick and Tim.  Mainly, Dick looked to me like he should be 16 or 17 and  Tim appeared closer to 13 or 14 when I thought I read he was suppose to be 16 or 17.

Anyways, Snyder does a nice job being the first to really show Bruce Wayne as Bruce Wayne in this relaunch, as well as Batman’s detective side when he goes out to investigate a murder.  Not to mention, Batman seems to have a lot of new gadgets to work with beyond that mask Grayson was wearing.  This is a really good issue for a #1 and I think it would have been a better starting point on Batman than Detective Comics #1 was (that is if we ignore Justice League #1 as his starting point).  I really love the ending though that will not just leave readings anxious for the next issue but ties into Nightwing #1.

Red Hood and the Outlaws #1

One thought on “Review: Batman #1”