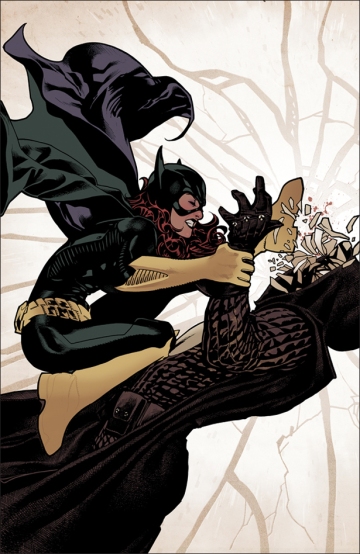 Fell a bit off with semester’s end in reading comics (I have a small stack from the last 3 weeks now I haven’t gotten to), and to be honest, I wasn’t planning on reviewing any of them until I got a little into this issue.

So the start I thought seemed like an interesting point.  Then it goes a little into Bab’s “cure” which apparently started precisely a year ago.  This threw me off completely.  Really, it did.  Three years back and she was put into a chair.  Issues 1-3 sort of made it sound like it was only recently that she got the use of her legs back.  This issue has it with one year ago she was sent to Africa to be cured?  I suppose that could still have given her two years as Oracle, maybe longer if she still did work while in Africa.  Still, that would be a year of stuff with her not around Gotham, and even more stories that she would suddenly fall out of.  At least a lot of previous stories since Dick became Batman would need to be changed considering Barbara would not have been around to be in them.  Personally, I’ve spent some time on this now trying to figure out how this works and I’m not coming up with much.  I wanted more info on how she got out of the chair, and I got some more.  All it did was confuse me more though, and wonder even more how DC expects all these changes fit in when a good amount of past history is still suppose to be the same.

On a bright note, Mirror gets finished off in this issue, and we see Batgirl pass a little holiday cheer.  Both of those were pretty nicely done, and I don’t have much to complain on there.  We meet a bit more of the roommate, get a little more of her background.  No matter what though, I just could not get pull myself out of the confusion that “cure” in Africa bit happening a year ago gave me.  If someone can better think of how this all works, please comment and let me know.