“The Nearness of You” is at least kind of a cheat for this column, in that it isn’t a normal-size issue, but I hope you’ll forgive me. Instead, it’s only 16 pages long, and it doesn’t star any characters we’ve ever met before.  And it is among the most heartbreaking, powerful comic books ever written.

Kurt Busiek’s Astro City is often pitched to people as the most realistic superhero comic.  It’s described as superheroes inhabiting the real-world, compared to the wide-screen action film reality that 99% of superhero comics actually exist in, no matter how much realism their grit claims to have.  Busiek himself, however, disagrees with that assessment.

“The telephone and the airplane may have transformed our world, but the superhero and the sorcerer haven’t had anywhere near as great an effect in the world of Astro City. And I like it that way. Making a superhero world realistic – making it a hermetically-logical alternate reality in which all the pieces make sense and work logically – that strikes me less as a superhero story per se, and more as that branch of science fiction that gets its stories out of making some change in the world, and then extrapolating from it, exploring the ramifications of a change in technology, or history, or politics on all other aspects of the world.”

– Kurt Busiek, in the introduction to Astro City: Life in the Big City

Astro City is rarely interested in that.  Though he does focus on some very basic differences, Busiek acknowledges that, in a ‘realistic’ superhero setting, culture, politics, sports, academia, romance… everything would be vastly different, so much so that society would be essentially unrecognizable.  And perhaps the best part of Astro City is its immediate recognition, the sense that these stories always existed in Marvel and DC and even, in a way, in our world, but they just weren’t the threads each plot before chose to follow.

Put simply, “The Nearness of You” deals with a Crisis.  The Time-Keeper – guess what his powers revolve around? – frustrated at his constant defeats and filled with the surety that nothing could possibly be greater than his intellect, manages to shatter the Time Barrier and do battle with Eterneon, Lord of Time.  And while it’s a battle that the Time-Keeper is fated to lose, it’s one with powerful ramifications, as entire cities disappear off the map, never constructed, heroes vanish, never born, and dinosaurs, vikings, and other such monsters run rampant across a world they don’t understand or recognize.  It’s a story you’ve seen a hundred times before.

And that’s why it can be told in 5 pages or so.  Because, while that is the back-story of “The Nearness of You”, it isn’t what the issue is about.  Instead, meet Michael Tenicek.  Michael is a normal guy.  There’s seemingly nothing strange about Michael’s life… except for his dreams. 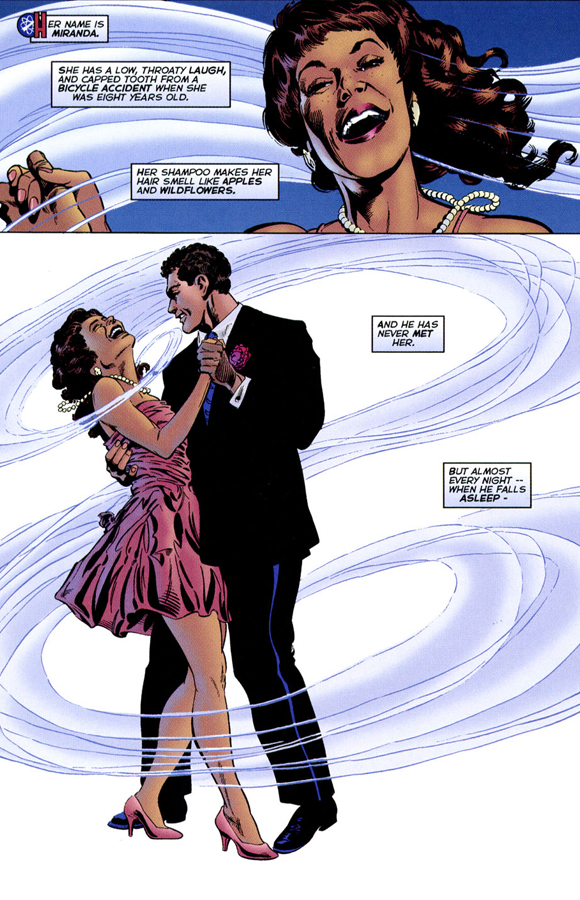 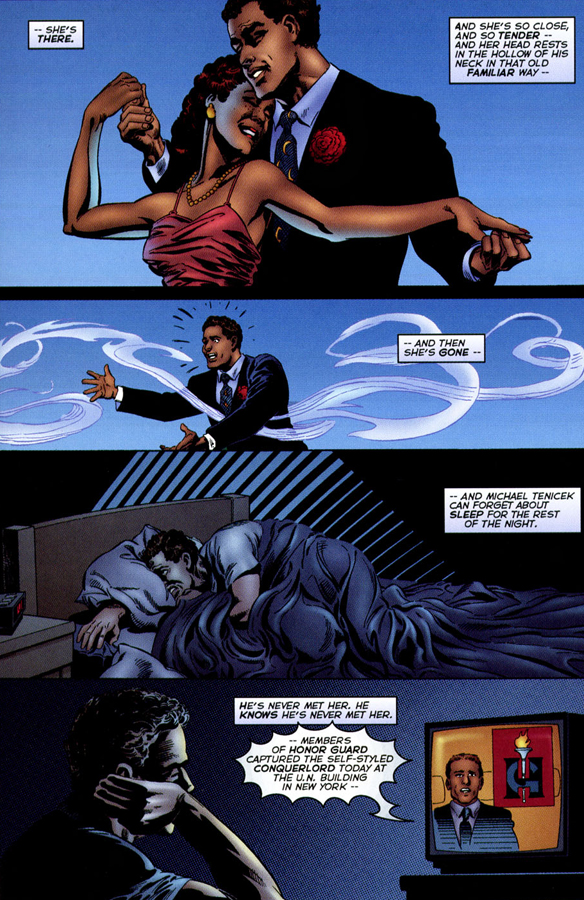 His dreams are ruining his life.  Michael can’t sleep, he can’t eat, he can’t work.  He’s constantly distracted.  He’s calling up friends to find out if it was a girl he knew in college, in high school, in grade school, from his block.  But no one knows who he’s talking about, and everyone is getting worried.

A longer arc might have been able to make the next reveal a little more subtly.  As it is, “The Nearness of You” gets it out of the way entirely through exposition, though to be entirely fair, it’s exciting exposition, well-illustrated and with a few pretty cool action scenes.  In short, the exposition is roughly the equivalent of most superhero arcs, hell, most major superhero crossover books.  What’s more, a longer arc would lose the gut punch impact of the reveal, and would necessarily take the focus away from where it should be: Michael Tenicek.  It’s impossible to lengthen the story without losing focus of Michael’s pain, and without that, you’d just be doing a big summer crossover. 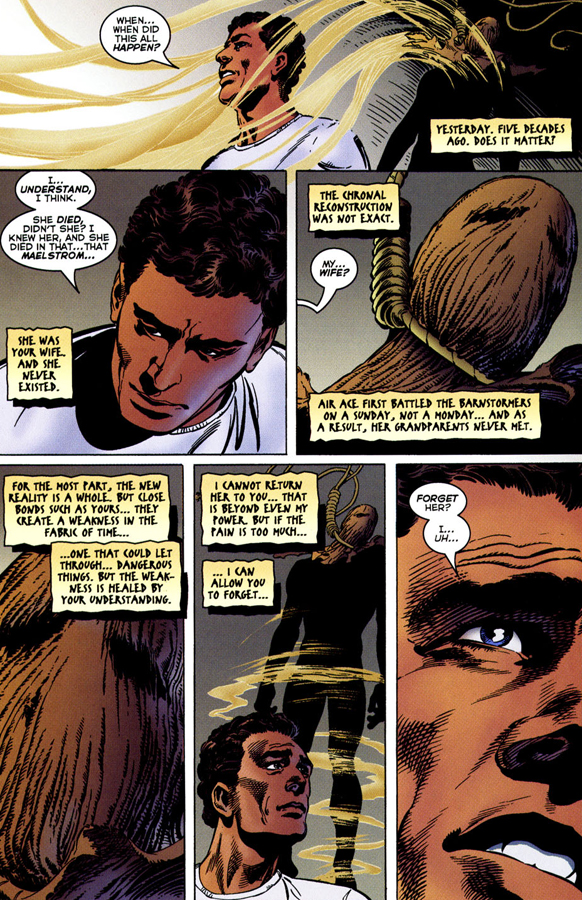 Busiek can get away with the lengthy exposition here, like he gets away with it every time in Astro City, because his world isn’t built on showing each and every event and careful retcon, but to allusion to the events and retcons of more familiar stories and archetypes.  It’s why, when we see the beginning and the end of the battles, we know how to fill in the blanks.  When we hear what’s happened to Michael’s wife, we understand how it happened.  We can fill in the motives of tertiary characters.

Astro City is written by someone who loves and understands comics largely for people who love and understand comics, and it’s allusion-heavy storytelling is part of the reason why that might be: to someone who had never read Crisis on Infinite Earths or Infinite Crisis or One More Day or really any of the half a hundred more stories in which timelines are drastically altered and it’s never mentioned again, the very premise might seem preposterous.  To someone who has read them, however, it’s a powerful repurposing of the very idea of such a massive battle, an acknowledgement of the consequences that no one had really considered before, or at least no one really admitted to considering.

Astro City never insults your intelligence.  It assumes you can get from point A to point B in a story with a minimum of handholding, so it will often rocket through plot points, story arcs, crossovers, and motivations, trusting that you’ll keep up and follow along, and believe me when I say, it’s all the more rewarding for it.  “The Nearness of You” spans years, in a way.  It creates two separate timelines, and it gives us a concrete difference, a painful difference, between the two.  It features an epic battle, heartfelt personal loss, and, ultimately, redemption.  In scope, I’d put it against Infinite Crisis or Secret Invasion or any other summer blockbuster comic any day.  In execution, I’d put it leagues ahead of all of them.

And it did it in 16 pages.  Busiek and artist Brent Anderson had a focus.  They had a reason for telling the story, and they never once lost sight of that reason.  It works because, at this length, it didn’t have time to get bogged down in continuity, didn’t have to slip-up in the characterization of any of its cast of hundreds, didn’t have to do anything but look at Michael Tenicek and Miranda, and make us feel his loss.