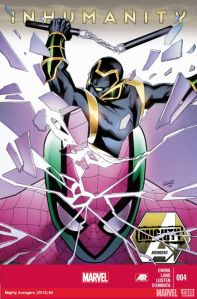 Mighty Avengers proves that it can be fun even when it’s boring.

TO BE SPOILED BELOW

With their first world-ending threat already behind them, the cast of this series sets to work on making themselves an official Avengers squad. This means things like confirming the lineup, clearing the whole project with the “main” Avengers, and, I kid you not, setting up a hotline where people can call in with problems for the superheroes to solve. Basically, Luke Cage is shutting down Heroes For Hire to open up Heroes Who Work Pro Bono, which is a simple but entertaining enough premise for a series. Unfortunately, this issue is primarily interested in introducing that idea but not really advancing it. Things happen like Spider-Ock quits, Falcon joins after amusingly needing to explain that not everything he ever does is a mission from Captain America, and Blade changes from his Spider Hero disguise into the Ronin costume that Clint Barton used to wear. There’s a lot of humor in those events, some that works and some that doesn’t, but they don’t make for very strong moments of actual plot development. All we get in that department is the first few small steps toward a vampires-on-Attilan storyline that I suspect will kick off more fully next issue. Or I guess they are called “walkers” and not vampires? Excuse my ignorance of the details of Blade mythology, but whatever, there are creepy monsters hiding on Attilan that Blade wants to find, which seems to be the center of the next arc.

Also involved in that storyline is a new (to me, anyway) villain in the form of Cortex Incorporated. Unless, hang on…is this the same Cortex that was a Multiple Man duplicate who got sent to a dystopian future and then came back with weird mind control powers in Peter David’s X-Factor? The head of Cortex the company does kinda/sorta look like James Madrox, but I can’t imagine that’s really on purpose. This is literally occurring to me now for the first time, so it ‘s probably not the case, but that’d be a pretty cool reveal if it’s coming, inasmuch as Cortex is a fairly weird/obscure character from a not-exactly-top-of-the-pops comic to bring back as a potentially major villain in this new series. ANYWAY…

Cortex Incorporated is a  typical evil corporation with grand designs and vague plans on how to change the way we all live in the future. One of their strategies is connected to the stuff that I guess just went down in the latest Marvel event, Infinity, which I haven’t read. Word on the street (and in this comic, explained quite succinctly through dialogue) is that a whole bunch of regular humans were given superpowers by being exposed to the Inhumans’ Terrigen Mist. So Jason Quantrell, the aforementioned head of Cortex, wants to get his hands on some Terrigen Crystals to recreate/gain control over the process of making normal people into super-people, so he sends his head of security, Quickfire, to break into Attilan and get some. Quickfire is herself one of the folks who got powers from the Mist, gaining the ability to slow down time in small areas or for certain targets, so that’s helpful. We see her successfully get into Attilan, but we also see the walkers/vampires lurking around her, so chances are things won’t  go well for Quickfire in the long run. She’ll likely be there whenever the Mighty Avengers show up and the shit hits the fan, an interesting unknown quantity for that impending conflict.

And that’s all Al Ewing Land seems to be going for with this script, establishing some new people and ideas so he can use them down the road. This is a transition issue between the first arc and the next, so there’s a lot of talking, exposition, planning, set-up, and foreshadowing. There is not very much action, but the dialogue is crisp and funny enough to make up for that, keeping everything a bit airy so it reads quickly and doesn’t become overly dull. Plus there is a single, glorious splash page of a big-time superhero brawl that was also the issue’s best joke, so bravo for that.

Speaking of splash pages, Greg Land’s art has been bashed and dissected a lot, by myself and others, so I’m not going to get too deep into it here, since I don’t have a lot of new stuff to say. His work on this book has been consistently better than what I think of as typical for him, but it’s still not that great. This time, though, what stood out to me right away and then for the entire book is that he handles eyes in a frustrating and inscrutable way. I think he must not like to draw them, because there are an awfully large number of panels where people have their eyes closed when it makes no sense. Listen, Greg, just because someone has a wide smile doesn’t mean you can get away with giving them no eyes. People’s pupils are visible even when their mouths are open. But also, it’s not like every time someone is smiling that this happens, and there are some pages where you can see a character’s eyes and it adds a lot of emotion and/or comedy to the scene. So Land can actually draw eyes quite well when he wants, but he seems like he’s avoiding them, and every time they aren’t there when they should be, I find myself seriously distracted by it. I don’t know if this is something he’s always done that I am just noticing now, or if this issue was an especially bad case of it, or what, but it’s obnoxious and it needs to stop.

However, other than that one hugely bothersome thing, the art’s pretty good here. Not a lot of exciting stuff happens for Land to draw, as I’ve said, but he still finds a few chances for interesting layouts and dramatic shots. He’s not the best storyteller overall, but he has individual panels or pages that impress.

All told, this was a mellow but still decent chapter of a strong and often hilarious book. Now that the team is in place, things should hopefully be able to advance more quickly.