Twenty-two pages fills up fast.  There’s no denying that.  Action sequences often eat up huge chunks of a book, and you can only fit so much dialogue on the page before it becomes cluttered, not to mention how much of the probably excellent art you’ll be covering up by doing so.  So, understandably, most writers will have their stories run in arcs, getting 44, 66, 88, etc… pages to tell it.  It’s not hard to see why, but the tendency to keep expanding the story is part of what makes it so rewarding when you come across a single issue that manages to not only exemplify what it is you so love about the book, but that manages to do so with an impressive economy of storytelling.  One Shot is meant to take a close look at why those issues work as well as they do, the way they do.

Sandman has become THE standard for comic storytelling.  While Watchmen is a dense, brutal punch to the gut, it’s also built to exist within the confines of superhero storytelling.  Sandman, sprawling, epic, literary Sandman, has no such constraints, which is part of its appeal in luring the indie/lit crowds into comics.  Over the course of 75 issues, Gaiman juggled dozens of subplots, antagonists, secondary, and even tertiary characters, weaving them all together to create an ambitious, creative, magical epic.

Though Sandman #8, “The Sound of Her Wings”, doesn’t come until the end of the first trade, it’s also the issue many fans single out as the first genuine stand-out moment of the series, the issue where it found its voice and grew into the series it was to become.  The first few issues are, for those that don’t remember, a fairly linear series of horror shorts featuring Morpheus, the Lord of Dreams, retrieving his missing artifacts after decades of imprisonment, and in them, he interacts with a number of DC luminaries, including John Constantine, Martian Manhunter, and, most memorably, Doctor Destiny.  “The Sound of Her Wings”, on the other hand, both begins and ends with Dream feeding pigeons, and the closest it comes to the DC Universe is hearing a so-so stand-up comedian doing a brief routine about Batman before she’d electrocuted.

What is it about “The Sound of Her Wings” that so captivates Sandman‘s audience?  I’d say it was a one-two punch.  The first, of course, is the introduction of Gaiman’s Death, a character who was almost instantly iconic. 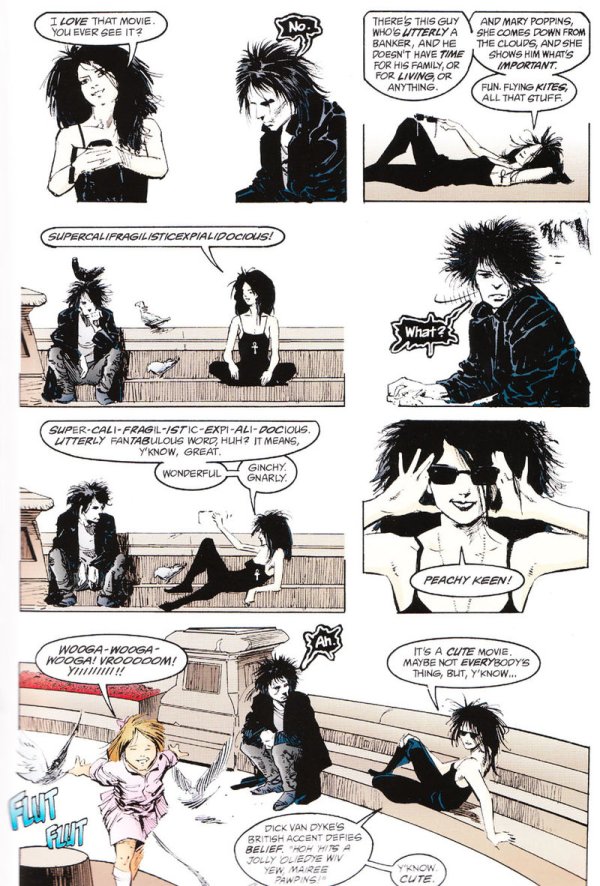 With Death, Gaiman definitely took the book in a different direction.  The horror shorts that opened the series were competent and enjoyable, but hardly revolutionary.  Still, Death was given a certain presence in them, and this being comics, something truly fearsome was no doubt expected.  Instead, Death is a pert little goth girl, a cheerful being who can’t help but love us all, because she’s the only one who really understands us, who gets to meet us at our worst… or our best, depending on your point of view.  The idea that Death loves us, that Death really cares, is so antithetical to most horror fiction, and yet she fits so seamlessly into the setting that it’s hard to imagine that she wasn’t there all along.

The other, of course, is the tone.  Gaiman abandoned the linear narrative of the early shorts for a meandering story of a brother and sister just… going about their day.  He abandoned the traditional horror for more haunting, melancholy scenes, like this one, of an ancient Yiddish musician dying alone…

… or, more painfully, this scene, where Death comes for an infant…

… and he managed to find something painfully honest in each of those death scenes.  That last one, in particular, can be quite rough to read, and part of that is because Gaiman has made us fall at least a little in love with Death already.  Charming, polite, and friendly, she is the best possible thing you could see right before you die, and it hurts her, just a little, to have people fear her so.  When she comes to take the infant, there is no objection, no suggestion from her or her brother – ostensibly our ‘heroes’ here – that they not do so, that they spare the child.  Instead, they do their job, and leave the mother’s world shattered.  To Dream, though, this isn’t just a job, this isn’t even a bad thing: Death’s arrival is a gift, and he is alien enough to us that he cannot grasp why we fear it.

But perhaps the most remarkable change came at the issue’s conclusion.  After an entire issue of watching people die, after 7 issues of some pretty brutal horror shorts, the story ends on such an uplifting note.  It began with Dream, listless and miserable, feeding pigeons as he contemplated the dull, rote work ahead of him, and it ends with Dream, joyous and rejuvenated, feeding pigeons as he contemplates the thrilling, invigorating work ahead of him. 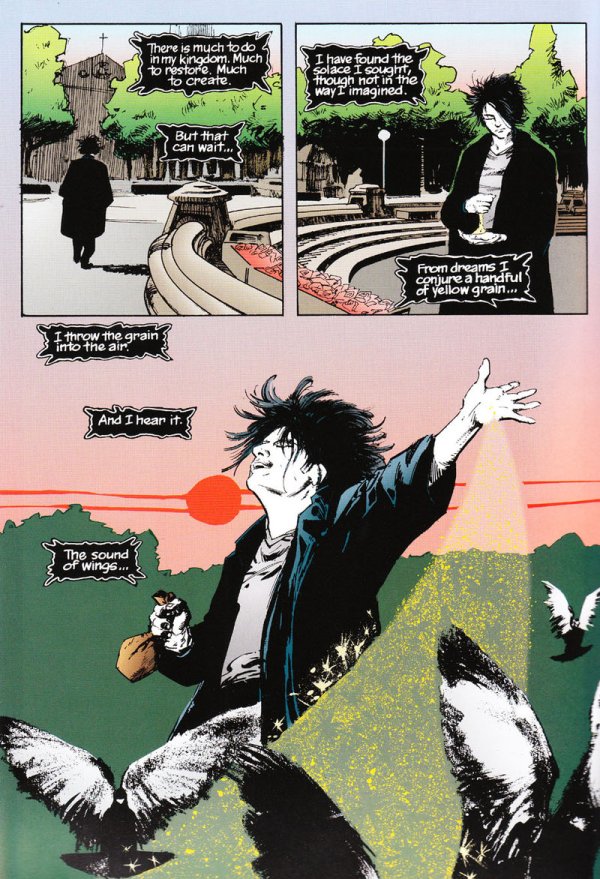 This, I think, might be key to the issue’s popularity.  The opening issues were very constrained, a simple premise without endpoint.  It could only do so much.  But with the conclusion of “The Sound of Her Wings”, Gaiman shattered that illusion.  Morpheus could go anywhere, do anything.  Sandman was no longer constrained by the conventions of the horror story.  It was no longer constrained by the DC Universe, or even by traditional comics narratives.  With the arrival of Death and Morpheus’ newfound purpose, Sandman was free to grow into something wholly its own.

Something like this is so uniquely suited to the serialized medium it’s astonishing.  It doesn’t make any sense whatsoever as a longer story – it’s meandering, character-based drama that with no plot to speak of – and it doesn’t really flow like a chapter in a novel would, either, considering how drastic the tonal and thematic shift is.  Instead, it serves as a kind of mission statement for what the series would become, an emotional, inventive book with a protagonist who could go anywhere and do anything, a single issue that manages to suggest so much more than the arc the preceded it.

* As a note: this is yet another new, hopefully recurring column I’ll be writing.  I’m aiming to have it up every other Friday, switching on and off with The Unread Canon.  And, like that column, I’m always looking for suggestions of good single-issues worth covering for this, whether I’ve read them or not.  Post any suggestions in the comments, and if I write it up, I’ll do my best to make sure to credit you for the selection.