I have mixed feelings about my relationship with DC Universe Presents, particularly with the opening arc focusing on everyone’s favorite undead acrobat, Deadman.  That sounds really stupid. Let me explain. No, there’s too much – let me sum up.  On the one hand, I really like that writer Paul Jenkins had an ambitious idea for a self-contained story, with little by way of action and absolutely no big-name characters.  On the other hand, the plotting was fairly haphazard, the stakes were never properly established and the story’s fumbling reach for profundity fell short.  All of which makes this a tough book to review, but an interesting book to contemplate.

END_OF_DOCUMENT_TOKEN_TO_BE_REPLACED 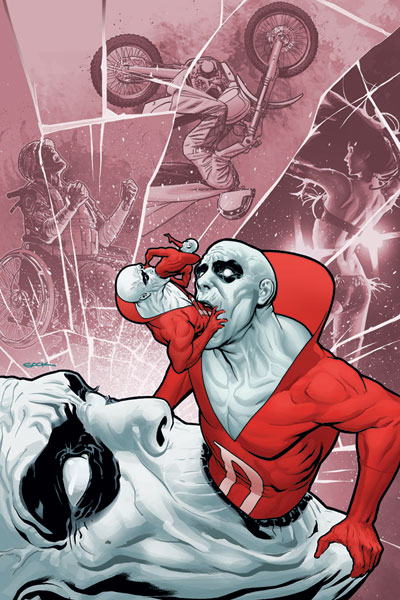 I didn’t know what I’d have to write about when I picked up DC Universe Presents #2.  I wasn’t even sure I was going to get it.  I thought the first issue was okay, but it didn’t wow me.  In fact, I couldn’t imagine what the series as a whole would look like.  Quantum Leap with super-heroes?  Not a terrible concept, but not one I was excited about.  But with DC Universe Presents #2, writer Paul Jenkins has taken a quick shift into the bizarre and unpredictable, and the book is stronger for it.

END_OF_DOCUMENT_TOKEN_TO_BE_REPLACED

This week David Finch and Paul Jenkins gets to work on the Batman centered issue and oddly I had no expectations in any regard going into this one.

END_OF_DOCUMENT_TOKEN_TO_BE_REPLACED 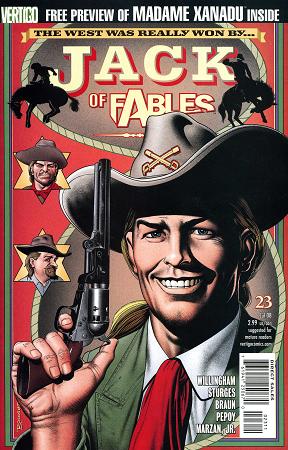 Again, not as funny as usual, but Willingham is telling some back story here so I guess I’ll allow it. Jack may not be as funny as usual, but he’s still the biggest asshole in the world. He kills the gun store clerk for selling all his silver bullets, threatens the sheriff, threatens to kill his own men… all that and he’s only in this issue for less than five pages. The majority of the plot deals with Bigby making a mess of the town saloon, killing five people and maiming half a dozen others. What the hell, dude. You call that keeping a low profile? At the end of the book, Bigby decides that in order to catch up to Jack, he’ll have to wolf-out and bark at the moon. That’s not very fair, especially since Jack only managed to get his hands on one silver bullet. Question: How many silver bullets does it take to kill a wolf-man? Second part: Is it okay that Willingham is mixing mythologies here, crossing the Big Bad Wolf with traditional werewolves? 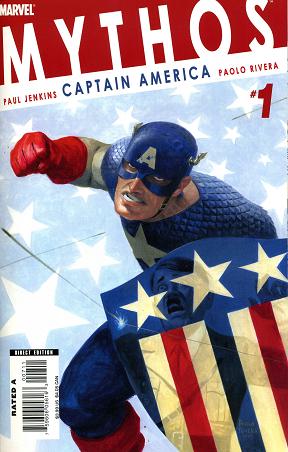 I’m not even sure why this book exists beyond being a marketing tool for the main title. It doesn’t really tell a compelling origin story instead it acts as an illustrated Wikipedia entry. I had this weird feeling all throughout reading this, like I was waiting for the plot to start. It never did. There is no plot. Not to say it’s badly written because it’s not. Not for what it is anyway. I’m one of the biggest Cap fans you will ever find and even I didn’t think this was essential reading, so I don’t think I can really recommend this one to anybody. Hmm, yet I still give it three stars… probably because I liked this cover so much, we’re using it in Marvel Evolution. SPOILER! 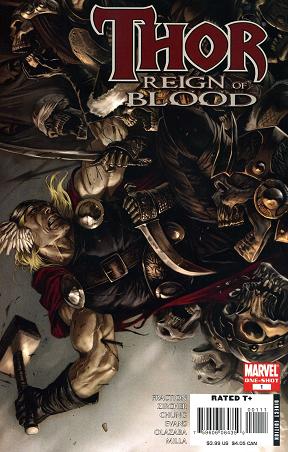 I stopped in the middle of writing this review to go for a walk around the old neighborhood. I haven’t done that in years, since High School maybe. Anyway, the reason I bring this up is because when I got back, I saw that Desiato had already posted everything I wanted to say about this book, but MORE and BETTER. So, I deleted what little I had written and wrote this stupid/lame paragraph of inner shame. However, I did save a little of what I wrote. For those interested, click below:

Quick Hits:
• Angel: After The Fall #9 (**): And we are back to suck. The art is just TOO bad. TOO TOO TOO bad. Distractingly bad. Didn’t I drop this POS?
• The Man With No Name #2 (*): I was wondering what happened to this book. I reviewed the first issue and if I remember correctly, the review wasn’t that bad. But this issue? This issue is bad.
• She-Hulk #30 (*): Peter David… why? Why do you hate?
• Ultimate Fantastic Four #55 (*): Oh man, I feel like I just ate bad Chinese.
• War Is Hell: The First Flight of The Phantom Eagle #4 (****): This books keeps getting better the longer it runs. Oh shit, only one issue to go.
• Wolverine: Origins #26 (***1/2): Um, not much to say. Way reveals Daken’s origin story and we kind of feel bad. And then Logan tortures some American-Japanese. What a jerk.