Siege continues to impress as characters finally wake up out of their years-long stupor and realize, “Wait, putting a bunch of supervillains in charge of everything was a bad idea, not a good one.”  Admittedly, no rationalization is given as to why this was seen to be a good idea in the first place, but in the spirit of fair reviewing, I won’t criticize Siege for the events of House of M, Civil War, Secret Invasion, or Dark Reign.  Instead, I will simply say this: with an excellent art team and a relentless pace, Siege resembles the epic scope and breakneck action adventure of Bendis’ best Mighty Avengers issues, but without thought bubbles or ass-shots.  There’s no impressive narrative trickery and the characters are little more than props for elaborate, gorgeous fight scenes, but that doesn’t stop Siege #3 from excelling at upping the ante of an already-epic action book. 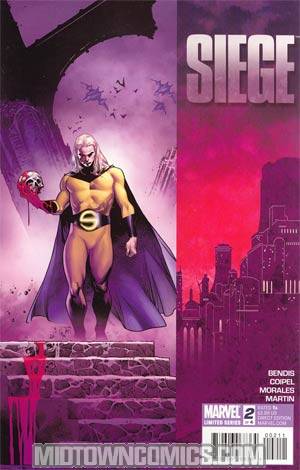 It would be preposterous to claim that the plot fundamentals of Siege made sense in any rational universe.  That is something that Marvel fans, however, have had a good few years to come to terms with, and editorial direction of the Marvel Universe notwithstanding, Siege #2 continues to deliver a surprisingly exciting ride from a writer not known for his thrilling action beats.  The issue is essentially a 22-page action comic, with occasional, brief breaks to give us reaction shots… and reinforcements.  While hardly groundbreaking, the opening half of Siege, ignoring all spin-offs and tie-ins, may be Bendis’ tightest work in the last couple years.

Coipel continues to be a big part of the mini’s success, deftly handling the bulk of the issue’s action.  While a few panels, most specifically the issue’s shocking, gory death, seem rushed and a little clumsy, others more than make up for it – seeing Maria Hill ride up in the back of a pick-up truck, rocket launcher in hand, was such a bizarrely charming sequence it couldn’t be ignored.  The issue continues to have flaws, but the fact of the matter is, right now this is exactly the sort of brief, simple beat-’em-up most people look for in these big events.  It may not be ambitious or revolutionary, but things are clearly happening, and these things are being caused by people with motives.  For a big event, this is success.

Built on an undeniably flawed premise – that somehow, by shooting someone once, a known and medicated sociopath would be given control of the vast bulk of the world’s metahuman forces with absolutely no oversight – Siege #1 nonetheless manages to be Bendis’ most focused work in some time, avoiding most of the traps his earlier events all fell prey to.  Osborn, finally going completely off the hinge, follows the advice of Loki and sets events in motion meant to kick start a war with Asgard.  Instead of waiting for the President’s say so, which he would almost assuredly get, he uses his lack of oversight and the ramshackle nature of the hastily-assembled HAMMER infrastruction to launch the war himself, gathering his Avengers and the Initiative and storming the gates of Asgard.

Coipel did not impress me in the preview, but his versatility is on good display here, easily handling everything Bendis asks him to.  The action scenes are quick and dynamic, while the larger-scale images are often quite memorable, from Volstag riding out of Asgard early in the issue to Thor rocketing down from the skies above near the end.  Adept at both epic action and quieter scenes of dialogue, Coipel has proven an excellent choice.

Bendis and Coipel work well together here, and the story moves quickly and believably into place with this issue.  Siege #1 pairs an intriguing, action-packed premise with a pair of fine storytellers turning in good work.  While there’s still room to go sour, especially given the borderline nonsensical conclusions to House of M and Secret Invasion, this issue nonetheless gives me a great deal of hope.  Quick and exciting, Siege #1 delivers exactly what it needs to in order to get you hooked.

We’ve reached double digits for J Michael Straczynski’s Thor, and it’s taken a little more than a year to get there, so I found this to be a good time to sit down and really parse things out for what this series has been and where it’s going from the perspective of its tenth issue. Haven’t done a full review in a little while, so bear with me.

For a book starring a guy who’s almost always had a shoot first, possibly forget to ask questions later mentality (that is, if by “shoot,” you mean “cave someone’s head in with a large hammer and electrocute his body”), there certainly isn’t a whole lot of action in this series. You’ve got a couple of action pieces, like Thor’s smacking Tony upside the head for all of that Clor business, or Odin and Thor tag teaming against Surtur in Valhalla, but it is quite plainly not the real focus of the series in this first series of stories. For the first time, Thor is legitimately the lord of Asgard. He’s in complete control. And the first couple arcs have been about the rebuilding of Asgard post Ragnarok. Thor begins by finding and waking up all the Asgardians sleeping in the bodies of normal humans, and follows with Thor confronting Odin in Valhalla, who basically gives Thor his blessing (as it were), so he can truly begin his rule of Asgard. And when he does…nothing really happens. But not in that bad way that everyone keeps throwing at Secret Invasion (FUCKERS! I mean…um…nice people that like this blog…erm…let’s just ignore that one). I mean, what would happen here? This is all taking place prior to Secret Invasion, so there are no Skrulls to fight (although it would seem pretty damned easy for the Skrulls to infiltrate Asgard, what with their ability to transform into both humans and Asgardians, but Matt Fraction’s going to have to let us know what’s going on with all that). They’re in the middle of Oklahma surrounded by bemused small town folks that only really bother them when a town meeting is afoot. But of course, there’s more to this than meets the eye. Because Loki’s around. And she’s got breasts.

There are a lot of reasons I could go into about the reasoning behind bringing Loki back as a female. I think it’s a stroke of genius not only from the original reveal (Thor is expecting to find Lady Sif standing in front of him…ah, fuck) but as a way of influencing the way the character works and the way others view her. Maternal figures are often innately trustworthy. It’s an instinctual mother/child thing. So why wouldn’t the ultimate deceiver disguise himself as a figure of ultimate trust? And this current arc is all about Loki’s slow infection of Asgard. This is the second issue of Loki’s assault on Asgard, and much like the past issue, she is using Balder as her proxy. You get these wonderful panels (good work, Mr. Coipel) of Loki skulking in the shadows above Balder’s shoulder whispering things into his ear (“Nah, you should totally do that. It would be awesome! Trust me on this one, nobody’ll notice” Not an actual quote, I just have that kind of voice in my head for Loki), manipulating his movements in classic Loki fashion. But what’s so great about this is the way that Loki doesn’t lie to Balder. He doesn’t need to. Because Balder legitimately is a son of Odin and prince of Asgard. And Thor and Odin didn’t tell him. And Loki knows this. Sure, there’s a reason why Balder wasn’t told he was the son of Odin (it has to do with Ragnarok and Balder’s heralding its beginning with his death). But it’s still kind of a dickish thing to do, especially after Thor brought everyone back, and disrupting Ragnarok was no longer a concern, and yet he still didn’t tell Balder of his true nature.

So we get the scene where Balder confronts Thor. And Thor can’t do anything other than tell him the truth, considering Loki is standing right behind him with that look in her eye. So Thor gives him the news and tries to get out of planning a coronation, and of course Loki demands that it happen as soon as possible, because this is a thing to celebrate! And all through this, you can see the look of anger and annoyance and disdain etched on Thor’s face. And none of it is directed at Balder. It’s all about Loki. And even during the coronation itself, where Balder comes out resplendent in fancy new duds and everyone is quite happy, Thor is still brooding in the shadows, because he knows that nothing good will come from this.

It’s a quiet series, and everything unfolds slowly and deliberately in a way that I don’t think anyone was expecting from this series. I mean, it’s Thor, so you can expect a lot of “thee”s and “thou”s and various people and creatures being hit in the face with a hammer. You don’t expect monarchical intrigue. But it works. There is this strange balance between the minutiae of back country folks dealing with a city of gods floating ten feet above their land (Asgard has a mail box. And it’s probably chock full of credit card applications. Which just got a story idea in my head of the Warriors Three getting their hands on a credit card…) and the sort of arch character moments that come from Thor trying to get used to ruling over Asgard for the first time with Loki skulking in the shadows, and being unable to find Lady Sif, and making the conscious decision to not look for Odin and the character questions that arise from that. It’s heavy storytelling, and it’s complex and deep and refuses to conform to the lowest common denominator of superhero books (YOU HEAR ME, JEPH LOEB?!?!?!?!?!?!?!?!?). And Coipel’s art (along with a couple fill ins by Marko Djurdjevik earlier in the series) has been up to the task from issue one, making sure that JMS doesn’t have to weigh down the dialogue with emotional exposition, because everything each character would ever think about is blatantly drawn out in the art. This is comics with a Shakespearian scope, and I’m eating up every second of it. I mean, between this and what Fraction’s done on the two one shots (and what I assume he’ll be doing with the Secret Invasion mini), it’s a good time to be a Thor fan (unless he’s written by Jeph Loeb. Seriously. Fuck that guy).