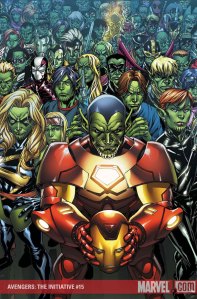 Wow, Crusader’s origin tale was almost as cool as Aaron’s characterization of the Skrull commander over in Black Panther. And the artist can really draw the shit out of those Skrulls. As for the story, again we get another good tie-in that adds more depth to shallow spine that is Secret Invasion mini series. One could almost just not read the mini and get the gist of the story primarily from the tie-ins. One could do that if one was so inclined… and I recommend it to those that have yet to jump into the Secret Invasion lake. Don’t wait for the trade, just read Black Panther or MI13 or any one of the countless other great tie-ins.

Picking up where Armageddon, Wildstorm Revelations and Number of the Beast left off, we have the relaunch of Wildcats. Cool. I always liked them, especially after Jim Lee left the book. He is stains. Anyway, despite not liking how they jump so far into the future (I read the Armageddon books, but why is Majestros evil again?), I still enjoyed this book. We got cannibals and cool explanations for powers and Grifter shooting shit and killer art and Black Ops back-up stories and angry god-like aliens… I mean, this shit is jam-packed. And we got Christos Gage writing more Wildstorm Universe characters. I think this is the Universe of characters he’s best at writing. Oh, did anyone else notice that the artist’s last name is Googe? Gage and Googe. Gage-Googe! GG!! Heh, I’m stupid. This book is not.

Quick Hits:
• Amazing Spider-Man: Brand New Day – EXTRA! #1 (***1/2): It was fine, especially the Joe Kelly Hammerhead story, but what was the point of this? We couldn’t squeeze these into the regular title? I hate when publishers do shit like this. I think I only ordered it so I could complain. Hah.
• Black Panther #38 (**): After the Jason Aaron Secret Invasion Arc, I am definitely dropping this book. Hudlin has lost the magic. He, in fact, lost the magic over two years ago and has yet to find it. So, I’m out.
• Daredevil #109 (****1/2): Where has this book been? WHERE?! I could almost be just as happy with this book if they changed the title to “Dakota North”. Not kidding.
• Reign In Hell #1 (***): Um, I ordered the first issue to see how it was… and I’m not impressed enough to pick up issue 2. I’ll wait for the trade, and if I hear good things, I’ll give it another shot.
• New Warriors #14 (***1/2): This was actually okay. As annoying as theses characters are, I didn’t mind so much when Justice and the “real” New Warriors showed up to kick the “fake” Night Thrasher’s ass. Oh, and thank gosh it’s only a two-parter!
• She-Hulk #31 (****): Where have they been keeping this artist? Vincenzo Lucca? He’s the stones! Okay, maybe his Darwin looks super lame, but She-Hulk looks rad! And the writing ain’t half bad either. Does this mean I have to add this book back to the pre-order list? Not quite yet. We’ll wait to see what else David has planned.
• Skulls vs. Power Pack #1 (*): This sucked. Where’s mark Sumerak? Why didn’t I check for his name before ordering this crap? UGH.
• Superman/Batman #50 (**1/2): This was too stupid. Too much retconning. Too much garbage that will never get referenced by Johns or Robinson. Now, if the story was better, then none of that would matter. But, it’s not, so it does.
• Thor #10 (*****): Can JMS do no wrong on this book? Man, when Loki finally drops the hammer, it’s gonna be curtains for the Norse Gods all over again!
• Ultimate X-Men #96 (*): Did I miss an issue or did this book feel like all kinds of jump cutty? Seriously, did we just fast forward past Northstar’s death? And then Jean’s in space fighting the Silver Surfer in a flashback? Huh-wha? Tell me I’m not the only one confused here? It felt like a compilation book, like the Spider-Man extra, like this issue was made up from parts of different future X-Men arcs… in essence, it sucked.
• Wolverine: Origins #27 (*): “HE DOESN’T REMEMBER ANYTHING.”…seriously, Way? GAH! Daken has memory problems!! NO!!!