I am a tad late on my review for Green Lantern: New Guardians #6, but considering that last week’s comic releases were slim at best I think it is still fairly relevant.

Last issue, we found the ragtag group of Lanterns being forced together by Larfleeze and teleported to an artificially created solar system composed of copied worlds, dubbed the Orrery—some of the planets the Lanterns recognize from their own travels.  Upon entering the Orrerry the Lanterns agree to pair off (at Kyle Rayner’s behest) in order to discover the meaning and origin of their journey and the artificial solar system.  Before long, the inhabitants of the copied worlds begin to call for their savior because of the Lanterns intrusion, thus summoning the Archangel Invictus to “smite the wicked.”

END_OF_DOCUMENT_TOKEN_TO_BE_REPLACED 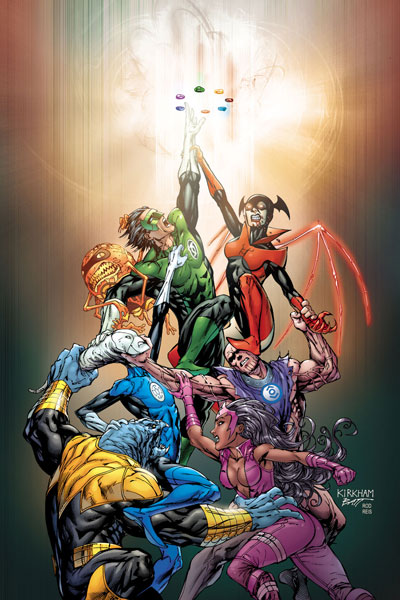 One of the hardest things DC’s relaunch has had to deal with is the issue of past continuity.  Some books have just thrown you into already-running storylines (Green Lantern) or expected you to pick up twenty or thirty characters you’ve never heard of without much of an introduction at all (Legion Lost), while others (Superboy) have given you whole new origin stories, essentially resetting the entire character.  And, at least for me, it’s always been better to err on the side of the reset – pretending we know the character in question is presumptuous enough when you’re relaunching 52 titles, but pretending like your entire audience will know the storyline you’re continuing?  Well that just seems like arrogance.  Green Lantern: New Guardians, which stars Kyle Rayner, hedges its bets, opening with an extended origin story for Rayner, but don’t be fooled – it’s very much a continuation of the ongoing plot from the last few years of Green Lantern and Green Lantern Corps comics.

END_OF_DOCUMENT_TOKEN_TO_BE_REPLACED

Vs. System has some of the greatest fans in all of fandom. True story. When faced with the possibility that one of the “Big Two” might be disappearing from our beloved game, they banded together to create what has so far been a truly worthy unofficial counterpart to Marvel Universe. And no, they didn’t pay me to say that or bribe me with the gift of submissive internet wives. It’s the damn truth. Have you guys been watching the previews? As excited as I was about the idea of this fan-created set, I’m even more excited to be a part of it… if only in a very small way. Not only do I get to preview a card, I get to preview a bad guy. I love the bad guys, they always gets to do the coolest shit, and what a monster of a bad guy this one is!

The inspiration for Kyle Rayner, Parallax comes from a little story we like to call “The Sinestro Corps War,” which ran through the Green Lantern books last summer. The event centered on Sinestro (ah, the title is not ironic, although still hard to say) and the formation of the Sinestro Corps, the fear-based opposite of the Green Lantern Corps. Very early in the story, Kyle Rayner (still Ion at the time) was captured by Sinestro and his brutal (I’ve been marathoning Metalocalypse) minions. They, of course, tortured his candy ass and as the coup de grâce, they ripped the Ion entity out of him and replaced it with the now freed Parallax creature. SICK! And then he goes insane. Eventually, his sanity is restored when Parallax gets evicted. However, and this is the suckiest part, after the exorcism, Kyle does not resume his role as Ion. The Guardians (hate those guys) “demote” his ass to Honor Guard, forcing him to work with that over-sized child, Guy Gardener. Okay, enough paraphrased history. Let’s talk about the broken-stally-ness that is this card.

First of all, this effect isn’t anything new to Vs. System. You may recall it first appearing on the 7-drop Punisher, Angel of Death from Marvel Legends. That card was good, but this card is bonkers. What makes Kyle a million times better than Punisher? Well, tons of stuff, actually! For one, you don’t need to deal with a clunky additional cost to recruit. Unless you were running Rogue/Mimic, missing a Punisher recruit on the way to turn 7 completely hosed your strategy. This is probably why we haven’t seen much in the way of tier one decks that involve the abuse of the 7-drop Punisher, Wolverine, Juggernaught or Invisible Woman. Wolverine.dec doesn’t count and neither does Family of Four. Those decks don’t live or die on their 7-drop plays. But, I digress as we can argue this at a later date…

So, why is it so much easier to fulfill the additional cost to recruit clause on this card? Oh, because of cards like Carrying The Torch and The Captain. The Captain is the most obvious way to cheat this card’s cost, but it’s also a simple matter to ditch a Sinestro into your pile and have your 5-drop of choice Carry The Torch. Or, I guess you could just play the already previewed 4-drop Sinestro with the Reign of Terror effect. Whatever.

Another reason this card is so much better than Punisher? He’s a 6-drop. This means, obviously, you’ll get more use out of him in the course of a game, and for stall decks this means that your “lock turn” could come as early as turn 6. This is key in today’s turn 3/4 metagame. This guy’s also got flight on Punisher, although I don’t think you’ll be using him to attack much. His effect is just too good. In fact, the only time I can see you attacking with Kyle is if you can’t afford to lose any endurance to his effect… which brings me to…

The real cost of this card: Your endurance. Your life. Your essence. Which, in my opinion, isn’t much of a cost at all. On most turn 6’s, your opponent will send their 4- or 5-drop into your 6 to try and bait out the activation, allowing the lower and less useful drop to “take one for the team.” So, Kyle’s effect will usually cost you 4-5 endurance. No biggie. But, if you’ve been doing your job correctly, you may leave him no choice but to send in his 6-drop or pass. Imagine playing this guy in a Doom or Spider-Man deck? Exhausting everyone but their highest drop and forcing the pass? Smells oh so sweet, baby! From a play pattern perspective, this card reminds me of another metagame defining 6-drop of days past. The 6-drop Sinestro, Green Lantern of Korugar (IRONY, at last!) played in a similar way. Sometimes, for fear of losing their whole board to his auto-stunning ability, opponents would just pass their attacks. Whether or not the designers had this in mind is anyone’s guess, but I like to think they did. It’s just too sweet to have happened by accident. Or, I could just be losing my mind.

What’s also interesting to me is that the loss of endurance to pay effects is a theme reminiscent of the Marvel Knights. I wonder about the synergy of a deck with the curve 4-drop Sinestro/6-drop Kyle/7-drop Punisher? Or, how about tossing Deadpool, Merc With A Mouth into the 5-drop slot (the how is up to you!)? And Rogue at the 4? Some torch carrying for good measure and we got ourselves a pile of jank! The possibilities seem endless, but this card definitely screams “stall deck” to me. Maybe that’s personal bias, but I just don’t see this guy fitting as nicely anywhere else. That’s not to say you can’t play him as your primary 6-drop in a beatdown or curve deck. He’s got very respectable stats and his effect is good in any build. But, I’m a min/maxer. I want the biggest bang for my buck, dudes.

There you have it. A quick glimpse at one of the strongest cards previewed so far. I’ve given you some obvious food for thought, but I have by no means been exhaustive. I’m already thinking about other ways to abuse this guy, but I think it’s more fun for you guys to discover the possibilities for yourselves.

I have to admit though, these DCU designers have made me jealous. I kind of wish I’d designed this card. Kudos!