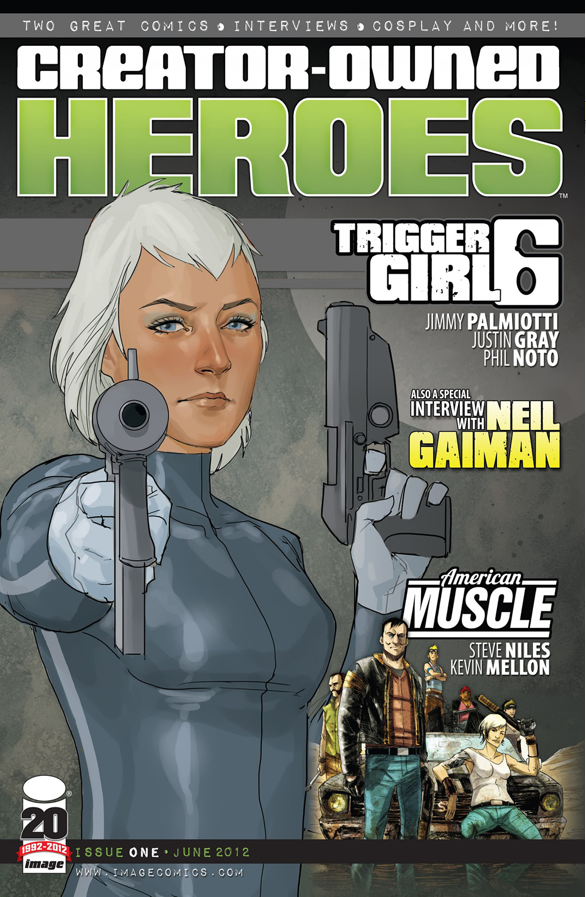 I have never really loved, or even hated,  anything produced by Gray or Palmiotti and 30 Days of Night, my sole venture into Niles’ work, was underwhelming to say the least. So I bought this book solely on the strength of its concept. An anthology equally featuring serialized creator-owned stories and comics-magazine-style content, e.g. interviews, pictures, etc. Although, as many have commented, the format isn’t exactly novel,  the creator-owned  hook is what really has caught people’s attentions.  As with virtually every form of entertainment, it’s incredibly pervasive for comic book fans to elide a certain key term: industry. The comic-book industry, by all accounts, doesn’t seem to possess the most progressive model regarding labour issues. Like most fans, it’s something I know in the back-of-my-head yet my desire to see Batman hook Superman in the face with a kyprtonite mecha suit ensures that those thoughts stay exactly there – in the background. However, I do want to see comics – as a medium, as a format, as an industry – grow, expand, mutate. In the last three decades it certainly has. The advent of the graphic novel, literary acceptance, the looming spectre of the digital revolution. None-the-less, for those unlucky enough not to be one of the handful of superstar writers, they don’t seem (and this from an outsider’s perspective) to reward their creators commensurate with the blood, sweat and tears that go into production. Enter creator-owned heroes. With this book, these guys are really trying to carve out a new space free from corporate exploitation but also editorial interference. The numbers will tell if this is a successful venture financially, but creatively, it mostly delivers.