Can DC honestly not understand that Rob Liefeld’s contribution to Hawk and Dove was the worst thing about it and – I have no doubt – one of the primary reasons it didn’t sell particularly well?

Their next step after canning the low-selling Hawk and Dove – GIVE LIEFELD THREE OTHER TITLES TO F@#$ UP!!!

Every so often I can look at a single Liefeld drawing and find something slightly appealing about it (I didn’t mind him on Deadpool Corps just from a historical perspective), but he is an AWFUL visual storyteller.

And as bad and lazy as a visual storyteller he is, he’s an even worse writer – from Youngblood (cough Teen Titans cough) to Agent America (ahem … no further comment necessary) his work is first and foremost derivative and unoriginal.  Let’s not even discuss the obvious links between Deadpool/Wade Wilson and Deathstroke/Slade Wilson (especially in the beginning before Deadpool’s character was developed in a way that differentiated him significantly from the DC villain).

Once again, DC are making decisions that make the New 52 feel less like a “bold, new direction for the future of comics” and more like Image Comics circa 1992.

Last month, I was just about the only person alive to give a positive review to Grifter #1, a super-hero/conspiracy thriller mash-up from Nathan Edmondson and CAFU.  This month probably won’t be much different, though my praise will be a bit less effusive: while Grifter #2 is a very exciting issue, it can’t quite make two important subplots work, leaving us stranded with a thrilling premise and solid art and not much else.  There’s enough here to keep me interested, but it needs to start coming together

END_OF_DOCUMENT_TOKEN_TO_BE_REPLACED 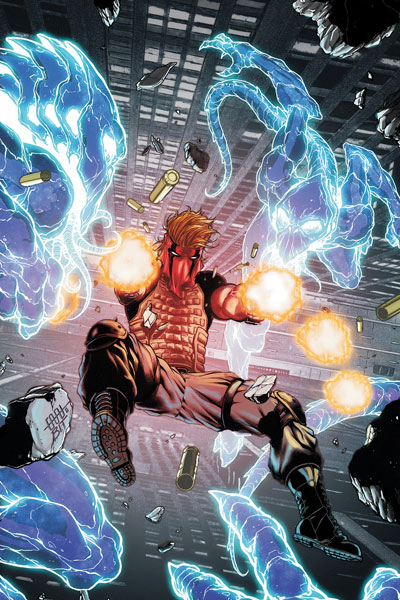 I’m probably the wrong person to review Grifter #1.  Popular opinion, both on the ‘net and among our writers, seems that Grifter is bad.  I disagree: I think Grifter #1 is an exciting, genre bending superhero story the likes of which we rarely see on the shelves.  One part The Parallax View, one part Invasion of the Body Snatchers and one part standard superhero tale, Grifter #1 poses a fascinating question – what would happen if you put a minor, street-level superhero in an old-school conspiracy thriller?  Read on to find out…

END_OF_DOCUMENT_TOKEN_TO_BE_REPLACED

Just like last week, I’m going to provide a plot synopsis and review for each issue that came out this week.  I’ll talk a little bit about my general feelings about the relaunch thus far, and how week two did overall.  Finally, for those who like awards, I’ll give out awards to The Must Read Book of the Week, to The Most Pleasant Surprise and, finally, to The Biggest Disappointment.