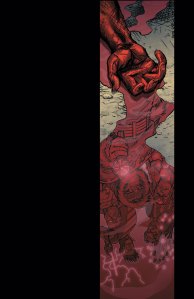 Every few months, I decide to give Geoff Johns a shot. I hear glowing reviews of everything he writes, and think, maybe I was just in a bad mood when I read his last book. Maybe Infinite Crisis was only bad because of editorial mandates? Maybe I thought his Teen Titans was trite, angst-ridden garbage because I had just outgrown the whiny teen angst sub-genre of superheroics? Maybe Green Lantern: Rebirth was just a particularly weak moment of his. After all, 52 was a work of extreme quality, and while Booster Gold’s “Blue and Gold” arc was pretty bad, the opening arc of the book was a lot of fun.

Final Crisis offered another opportunity to give Johns a shot, as he was working on three tie-ins: Legion of Three Worlds, Rogues’ Revenge, and Rage of the Red Lanterns. Based on the strength of the opening issues of Final Crisis and the fact that I was reaching another point where I thought he deserved a shot, I decided to get Rogues’ Revenge and take it from there, but the first issue of RR was strong enough to warrant trying out L3W.

Today, Rogues’ Revenge ended with the weakest issue of the three-issue mini. Part of this weakness comes from the circular nature of comics – in the opening issue, we were given the premise that the Rogues wanted to retire, but needed revenge, wanted a clean slate before they did so. It was a strong premise well-executed, but the end of the mini leaves me undeniably cynical.

I have never understood the appeal of Kollins’ art, and this issue did nothing to change my mind. Some panels were quite strong, but I think that his action panels were sloppy and static. As always, Johns’ nails the Rogues’ interactions, and it’s those panels that are strongest. The opening scenes with the Weather Wizard were powerful – a great deal of the emotional core of the series was. And the series as a whole was an interesting tie-in, used to strip Libra of the weapons he had planned to use against the Flashes. Like a decent tie-in, it contributes to the main story without taking anything away from it. Still, there’s no way I can read the end of the book without feeling just a little bit sour at the state of the industry as a whole.

Meanwhile, Legion of Three Worlds is an example of everything I dislike about Johns, a massive continuity-wank to his old-school fetishes, ignoring or insulting the modern equivalents. With Perez on pencils, the book feels even more old-school, and not necessarily in a good way. The action is static, and too much of the emotional punch of the book depends on coming into a series with a deep connection to the Legionnaires he’s using. Some writers can make me care quite a bit about the life and death of a character I’ve never met before in a single issue. Some can do it in a few pages. Johns isn’t one of those writers.  Empty action and emotionless exchanges make a subpar book and the first Final Crisis tie-in I would call a true failure.