Better late than never, eh? This is my list for the top ten stories of 2009! Woo hoo! Now, before we get to all the fun of me voicing my opinions and you disagreeing with them, I have to get a few rules out of the way.

2. These are stories that ended in 2009. They could begin at any time, but as long as they concluded in 2009, they’re eligible.

3. I tried to keep the list as diverse and reader-friendly as possible. I love certain writers, but it would be boring if it was three Morrison books, two Kirkman books, etc. So, a writer/artist will only appear once on the list. I tried to spread the love evenly. You will see Marvel, DC, and even indies on this list.

END_OF_DOCUMENT_TOKEN_TO_BE_REPLACED

Continuing the feature I started last month, here’s my list! I read 17 comics in May, and these were the best.

I’m sorry. I haven’t written a review for this comic, and two others on my list, but this was a great Green Lantern issue. This issue, like most of the Johns-penned Blackest Night preludes, is packed with interesting information. On top of that, Johns continues to make Larfleeze (Larfreeze sounds so much cooler) a really interesting villain. But the absolute awesomeness of this issue can be found on the last page. Oh, what a last page.

Oh, I love this feeling in comics. The book is new, and it just feels like the best thing ever. Ok, so Irredeemable isn’t flawless, but it’s a damn fine book. When we reflect on the man’s career, this could be the best Mark Waid comic. He’s writing the hell out of this book.

It’s sad. I think a lot of people dismissed this after the delays. I can certainly understand their reason for doing so, but if you did drop this book early, you missed out on a great series. Lindelof, while being a bit too unchained, actually wrote Wolverine and Hulk as fully fleshed-out characters. You know where they stand. And it’s so refreshing that the real “Wolverine vs. Hulk” of this series was much more psychological, instead of just a flurry of punching. Yu’s art is easy on the eyes as well.

Often thought of as my favorite ongoing series, instead of thinking “Will this issue be good?” I wonder “Just how good will this issue be?” This is definitely in the top-tier of The Walking Dead issues. There’s some bad stuff that happens here. If you aren’t reading this series, you should be.

Wow! Two Wolverine books in one month? That never happens! That’s because, with so many damn Wolverine books, most of them are repetitive and/or mediocre at best. But that’s exactly why “Old Man Logan” is so good. Millar takes a character that has been severely overused, and breathes some new life into him. Ok, so his actual characterization of Wolverine is more like Clint Eastwood than anything else, but this is a Wolverine story that is actually innovative. This series is packed with off-beat, fresh ideas. Oh, and Steve McNiven’s art is GORGEOUS!

So there it is! Agree? Disagree? Please, let me know!

I love comics. When a comic reminds you of that, it’s pretty damn sweet. This is a medium where you can do just about whatever you want. You’re not hindered by the burdens that come with TV. So, Lindelof totally cuts loose. This comic is broken into five parts:

Part One: In Which Logan Pisses Off A Panda

Part Two: In Which Logan Loses His Head

Part Three: In Which We Once Again Flash Back In Time To Explain Things Better (How Original)

Part Four: In Which Logan Makes A Valuable Ally In His Toilet Bowl

Part Five: In Which Logan Ignores The Panda’s Advice And Thusly Screws Himself Good At The End Of The Issue

That’s actually what happens. Logan really does fight a Panda, which reminded me of this. Logan’s head really is detached from his body. Hulk and She-Hulk…wrestle with each other. Forge’s (Why is Forge everywhere right now?) head pops out of a toilet. All this stuff is absolutely ridiculous, but it makes for a highly entertaining and memorable comic. If it wasn’t my favorite comic this week, it was definitely the most fun. Oh, and Leinil Yu is still drawing really pretty pictures. 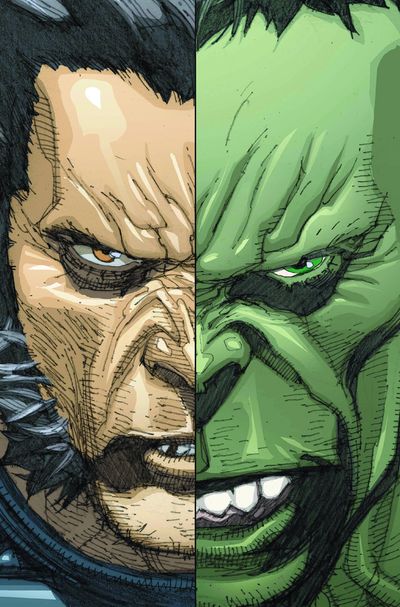 Are you ready for another trip down memory lane? I just read this issue about a week or so ago, and yet without opening the page I can barely remember anything about it. All I remember is that things didn’t really progress at all in this issue. That’s right, it’s flashback time! What happened in Ultimates 2, how Hulk got all those beautiful women and so on.

That’s really all this issue is. What’s Hulk’s side of the story? It’s him finding peace and all that jazz. Again, is it well-written? Maybe, there were some fascinating moments like when Banner refuses to eat meat and then goes green and eats cows, hands and so on. Do we know that stuff about Hulk? Yeah, but it’s still fun to see. Because of the lack of story, I’ll focus on the art. This is from Mr. Yu. I don’t know what to think of this man’s work. There are times when his art is muddled or esoteric and others when it’s extraordinary. As much as I disliked Secret Invasion, it looked undeniably marvelous. I’m not sure if that was because of time or effort or as with most things in life, a bit of both. Yu certainly gets the job done here and he does aid Lindelof’s writing immensely. Still, this is definitely pre-Secret Invasion Yu. I’m eager to observe post-Secret Invasion Yu. The second issue promises “The Damn Fight”. I just hope we don’t delve into the opposite extreme and receive excessive action.

It seems like just yesterday when I flipped to the second page of this comic and saw this. Say what!? Did you hear as many fanboys bitching about that as I did? Oh well, I thought it was a humorous and shocking beginning. A good start for sure. The rest of this comic? A bit disappointing after that blood-pumping start.

This is the standard set-up issue. Government man (Samuel L. Ja…I mean Nick Fury) recruits a badass (Wolverine) to go kill that monster (Hulk). Wow, it’s like the 80’s all over again. Was the set-up well-written? I suppose, but it remains ultimately unmemorable. I believe this is Damon Lindelof’s first comic adventure, so I’m willing to wait while he gets his act together. And hey, at least the issue ends with Wolverine giving the old “Snikt” staring down the Hulk and a bunch of beautiful ladies. So maybe Lindelof just needed one issue of set-up, eh?