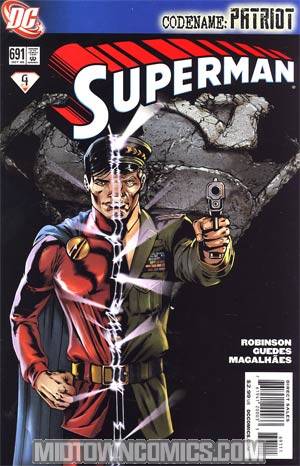 The book starts in the middle of a conflict about… something… between Kara and Mon-El and Nightwing and Flamebird, and things don’t get much clearer from there.  A lot happens in the issue, but it’s all so intricately tied into the “Codename: Patriot” story that regular readers of Robinson’s run shouldn’t even bother picking the book up unless they’ve invested in the entire arc.  This is not to say that you can’t follow what’s happening; after a few pages to orient yourself, you should have no trouble with that.  The problem comes with the realization that you just won’t care to – these problems, taken out of context, seem trite and dull.  Even Guedes, normally excellent, offers a clunky opening fight scene, though he comes back up to his usual high standards shortly thereafter.

Supposedly, Gail Simone’s much-rumored Big Event for next year has been either pushed back or shelved indefinitely in favor of a Johns-penned Earth/Krypton war.  If “Codename: Patriot” is any hint at all as to what we could expect from such an event, all it will do is drag a number of otherwise excellent titles through the mud in pursuit of the sort of racial-themed action books that X-Men has been doing pretty much nonstop for the last 40 years.  We get it: humans hate everyone and everything indiscriminately.  Can we move on yet?

Hey everyone.  Sorry about the continued backlog of reviews – I’ll try and get them out this weekend!  Just finished the last of my coursework for my Master’s degree two days ago, so I’m finally free and clear.  Now, if I can just find a pesky ‘job’ before my money runs out! 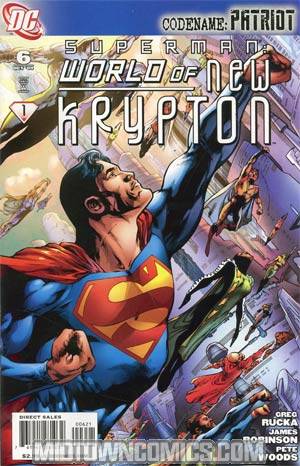 As someone who isn’t traditionally a fan of the character Superman or any of his books, the quality of his titles right now has come as something of a surprise.  No title illustrates this quite as well as Superman: World of New Krypton, a sprawling sci-fi book about Superman’s adventures off Earth, among his own kind.  Working together, Greg Rucka and James Robinson have turned what could have been a labored year with Superman off his main titles (and Earth) into one of the most creatively intriguing periods of the character in recent memories.

With the attempted assassination of General Zod, New Krypton is panicked, and the House of El steps up to try and maintain order.  Rucka and Robinson continue to portray all the characters, from the sociopathic Ursa to the cold Alura, with far more humanity than they’ve ever been shown elsewhere, and it makes the drama all the greater.  Things continue to degenerate on New Krypton, and the big crossover between the Superman family titles – “Codename: Patriot” – clearly starts here.  It’s an exciting opening to the story, though I have to say, I hope you don’t have to read all four relevant books in order to follow the story.

Woods, normally quite good, demonstrates a little bit of weakness early in the issue as the assassin attempts to fight his way through the crowd of Kryptonians, but picks up quickly – by the time you see him dragged down, screaming, by forty or more angry supermen, you’ll begin to realize the damage a riotous population can do.  He also continues to do excellent design work on the world itself, amping up the alien feel of the technology while still making it a recognizable offshoot of the familiar Fortress of Solitude designs.

Ultimately, World of New Krypton remains an interesting, fun book that does an exemplary job of illustrating just what it is that makes Superman so great while laying seeds for a ton of potentially fascinating future stories.  With hope, “Codename: Patriot” can live up to this excellent opening issue.