Batman and Robin #9 marks the conclusion of the book’s third arc.  With this, only a single arc remains of the pop action book before “The Return of Bruce Wayne” takes over, and the book will be missed.  “Darkest Knight” has been an action-packed arc featuring excellent moments not only from the usual suspects – Batman and Batwoman – but also a few lesser knows who’ve long deserved more time in the spotlight – Knight and Squire – as well as a confrontation between the crazed, fearless Batman clone raised in a Lazarus Pit and Alfred and a wheelchair-bound Damian.  The pacing is well-handled and the tone is spot-on, making Batman and Robin #9 an undeniably read.

Stewart continues to work quite well with Morrison, providing crisp action segments – of which this issue has a number – and excellent physical presence to his characters.  Morrison and Stewart work well together here, and it’ll be a shame to see Stewart replaced next issue by Andy Clarke and Scott Hanna, but it’s always interesting to see how the tone of the book changes with new creative talent.  Still, Stewart helped revitalize the book after a lagging second arc, and “Blackest Knight” was a clever use of left-over plot threads from Final Crisis and Batman R.I.P. that also managed to set up The Return of Bruce Wayne and validate Tim Drake’s assumptions in Red Robin.  All this was accomplished with minimal handholding, and though none of it was necessary to the story itself, it was a good Easter Egg for those keeping up with DC’s continuity.  Quick, clever and ceaselessly fun, Batman and Robin may exhibit more sheer joy per page than any other Batman story in recent memory. 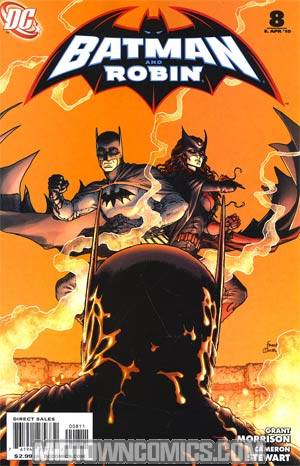 Batman and Robin #8 continues the book’s upward trend, a return to form for the critically respected pop action book.  Told largely out of order, it switches between a couple different timelines. The first takes place before #7, suggesting how Batwoman came to find herself in a coffin and who set Eddie up with a bomb on the subway, while the other continues after Batman slips, uh, Batman (that is, Dick slips Bruce) into a Lazarus Pit, intending on reviving the fallen hero.  It also fills in small blanks from Final Crisis, Blackest Night and more in the space of about two panels, has some solid action, introduces new characters and excellent new problems.

Cameron Stewart provides excellent art, a welcome change of pace after Tan.  The fight scenes are crisp and quick, the characters all have relatively distinct physical personalities – something that’s difficult to do, often overlooked, and was done excellently in B&R’s first arc.  The fight between the two Batmen is particularly well-handled.

Though there are one or two slip-ups – this is the second time in two issues Batwoman has been imperiled and helpless, to name one of the bigger ones – Morrison nonetheless does a good job characterizing her, Dick, Damian and more.  The final cliffhanger is exciting without being exploitive, and the writing and art are sharp and coherent.  Batman and Robin may have had a shaky sophomore arc, but “Darkest Knight” has been rock solid so far.