So recent Spider-Gwen Annual is a fun affair.  It gives a fairly nice view at some of Earth-65’s world beyond what we’ve currently seen.  While I’ve absolutely been loving Spider-Gwen, I’m very happy this issue isn’t a focus just on her life and history.  Along with that we got a nice view into Earth-65’s Captain America to a point that I really want to learn more about her character now and her connection with Steve Rogers, her former adventures, and current ones too.  Seriously Marvel, start up a Captain America 65!

Probably the strangest thing to hit from this issue though was Mental Organism Designed As America’s King (MODAAK).  Sure, they never actually call it Trump or Donald, but how can you deny this?! 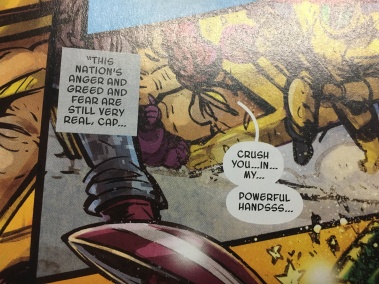 Just look at that face!  The allusion to “Make America Great Again” and a jab about hands!  There can’t be anyway this isn’t a jab at Trump!  Is it bad I really want to know if this MODAAK Trump is really King of America, or if it’s just an odd naming bit?

Also, yes I know I need to get hold of a scanner, phone pics of comic pages aren’t great.