Writing a great first issue is hard.  With “#1 With A Bullet”, I wanted to examine some debut issues that worked – or didn’t – in an attempt to figure out just what makes a great first issue… and what common mistakes creators occasionally make.  Today, I look at Mark Waid’s fantastic Daredevil #1 and the art of revitalizing a character who has been stuck in something of a rut. 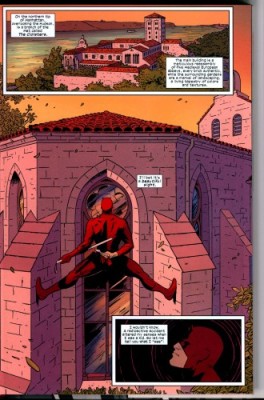 Daredevil, much like Batman, has been stuck for a very long time in the shadow of one man: Frank Miller.  I understand why so many writers wanted to emulate what they saw Miller doing – it was iconic, groundbreaking stuff that saved the character from cancellation and turned him from a C-list also-ran into one of Marvel’s most recognizable heroes.  What few subsequent attempts there were to take the character back to his lighter roots were largely met with disinterest, so things just kept getting darker.  Talented writers like Brian Michael Bendis and Ed Brubaker were able to take Miller’s basic template and do some excellent things with it, but few writers could walk that line (because few writers were as knowledgeable about crime comics and film noir, both of which grew to be vital to the character) without having things descend into camp.  How many of Daredevil’s lovers can be driven mad and killed before it gets more ridiculous than tragic?  How often can he lose everything and go through a period of intense antiheroism?  How often can his identity be outed?  How often can we read the same type of story before we get sick of it?

Mark Waid’s Daredevil (Vol. 3) #1 was a breath of fresh air.  It didn’t ignore the darkness of the character; rather, it did exactly what Frank Miller did all those years ago and repurposed it for a modern era.  All the elements of Miller, Brubaker and Bendis are there, Waid just forced us (and hero Matt Murdock) to look at them a slightly different way – and that, I think, is the key to a successful reinvention.  Don’t ignore the past, but use it to fuel the change. 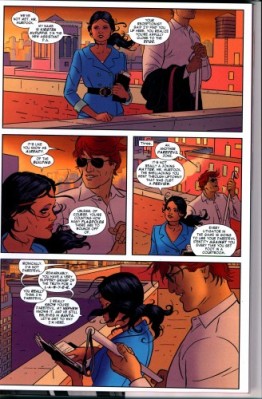 The first 8 pages are almost a statement of purpose about the series as a whole: lighter colors, a beautiful location, and a hero who isn’t afraid to steal a kiss from a mob princess before diving headfirst into a villainous trap.  It’s 8 pages of pure, unadulterated character in a way that you almost never see, especially so early in a title’s life.  But it is the final 10 pages that really sell the idea that this is the same hero we’ve been following for so many years, a short story that contrasts Matt’s newfound lust for life with the more classic take on his darkness, assuring older fans of the series that the character’s darker impulses were buried in a shallow grave.

In the book’s 11 other pages, Waid sets up almost every other running conflict for the first year of the series, while largely ignoring the actual, y’know, plot that would dominate the first year of his run.  A.D.A. Kirsten McDuffie’s repeated, flirtatious attempts to prove that Murdock really is Daredevil will run for well over a year, as will Matt’s work to regain the trust of his friends and colleagues.  His attempts to stay strong in the face of overwhelming darkness is first teased in the book’s final pages, and that’s going to be an enormous focus of Waid’s run – indeed, the book’s final page actually teases a minor upcoming storyline, one that itself prepares us for a major story over a year away.  There’s not a single wasted page in Daredevil #1, a rare feat that’s become almost unheard of in the modern age of ‘writing for the trade’.

As I touch on above, a big part of the reason this reimagining worked is down to the art team.  That first page, as Daredevil spies on the mob wedding at the Cloisters, is gorgeous – the colors, the light, the old-school architecture, the natural setting – displaying a warmth that previous Daredevil artists purposely avoided.  The confident, polite physical language of Kirsten McDuffie comes through perfectly.  The pink-and-black radar vision is both aesthetically absolutely gorgeous and a concrete take on Daredevil’s radar sense, one that emphasizes depth and de-emphasizes detail.  It’s a simple decision by artist Paolo Rivera, but one that actually helps get inside Murdock’s head.

I often discuss how a good first issue will give me an idea of what I can expect from the series, at least in the short term.  A lot of people mistake this to mean, “Start the plot.”  I generally don’t really care if you don’t tease the overarching plot of a run or a series in the first issue.  What I’d really prefer is for you to ‘Start the story’.  Give us a world, a character, and a point of view.  Comics are a long con, a game meant to run years or even decades, and the serialized format can make elaborately plotted stories hard to follow, momentum hard to maintain.  Readers need something to hang on to from month to month, volume to volume, and the first hints of plot – generally speaking – isn’t going to cut it.   Daredevil #1 has little to no real plot, but it’s jam packed with story, with little characters having little moments that add up to something bigger, that tell you exactly what you’ll be reading.

Just like with Frank Miller’s run, Waid has a point of view, here, a philosophy, something beyond just ‘doing what worked before’, and one of the great pleasures of Waid’s run is the way that point of view is so thoroughly baked into almost every single issue of the run, including its debut.  Daredevil‘s darkness is still there, and as the series progressed it would periodically rise to the surface quickly and brutally, laying waste to everything in its path before it receded.  Waid took a trait that many writers had begun to see as something necessary to the character and turned it into a supervillain of sorts, a force of nature that could rise up at any moment and swallow Matt – and us – whole.  That sense of impending doom is a big part of why the on-the-surface ‘lighter’ take on the character spoke to so many people, allowing Waid to stay true to a complicated character even as he reinvented him.

Next Week: The Authority #1