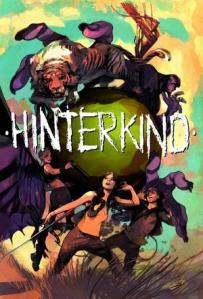 Spoiler Warning right off the bat

It’s the distant future, and humanity is no longer running things on planet Earth. There are still some small communities left, but humans are on the outs, and civilization doesn’t look like it used to. Former cities are now dilapidated and overgrown with plant life, and animals roam through them freely. It’s a wild and dangerous place to live, getting more dangerous all the time, in ways  the few remaining humans aren’t even aware of yet.

Prosper Monday is the protagonist of this book, and despite her absurd name I quite like her. She’s smart and matter-of-fact, a loyal friend, and has all the necessary skills to survive in her harsh setting. We don’t learn much about her background, really, except that the only family she seems to have left is her grandfather Asa. When we meet him, he’s setting out to leave the encampment where he lives (in what used to be New York City) and travel to Albany, where another group of humans have been living. The New York group recently lost contact with Albany, so Asa wants to investigate the cause. Other members of his camp think it’s a crazy idea, but he won’t hear it, so they agree to give him a scout and a hunter to aid him on his journey. Prosper, overly eager to prove herself and having just returned from an unapproved but successful hunting trip, wants to join her grandfather, but he refuses, because she’s all he has left. He leaves her in the care of her best friend Angus, except, whoops, turns out Angus has his own plans to leave home (see below). So instead of going with her grandfather on a mission with a real destination and goal, Propser tags along with Angus who is basically wandering out into the world aimlessly. Their trip gets off to a rocky start, to say the least.

Written by Ian Edginton with art by Francesco Trifogli, Hinterkind #1 was produced by creators who are entirely new to me. I went in with zero expectations, and left with the same. I still don’t really know what to make of this book, as evidenced by my starting this review with a plot summary that offered no opinions. It’s a fine first issue, a decent enough idea, and a pretty well-put-together comicbook. Edginton doesn’t spend his time on character introductions, choosing to let the cast’s actions speak for themselves. There are a few excerpts from the “Book of Monday,” something I assume Prosper will write in the series’ future, and they get out a tiny bit of exposition as far as the current state of the world. But even then, there’s no actual explanation as to how things got this way, just some comments on what life is like now that humans aren’t on top. Other than that, there’s no narration, just dialogue and action moving the story forward. I prefer this approach to a more overtly introductory one, so Edginton’s writing was strong enough to make me come back for more.

That being said, none of these characters has me hooked yet, nor do their stories. Angus chooses to leave because he recently discovered that he has a tail, a rather big and embarrassing one at that. There are also a couple of nods to Angus being secretly gay, so I’m thinking the tail is analogous to his homosexuality—something that can stay hidden for a while but not denied forever, and marks him as being different from the people around him. It’s maybe a bit obvious, but not a bad metaphor, so I’m all for it in concept. However, in execution, Angus is sort of obnoxious and immature about the whole thing. He runs away from home because he doesn’t want people to discover his tail and judge or exile him, but he also has no concrete reason to believe that they will, at least not based on the explanation he gives Prosper. He compares himself to a man who was kicked out for getting drunk and beating his family, but that is SO FAR from what he’s dealing with that it makes no sense. Prosper even points out how different the two situations are, but Angus isn’t listening. He’s already labeled himself a freak, and decides preemptively that everyone else will, too. To be fair, he knows more about his society than I do, so I’m not saying he’s wrong. But he abandons his sister with a note and ventures out into an unexplored jungle based on what he thinks is going to happen, not something that has actually occurred. That’s a frustrating point of view.

Anyway, Angus is the person we get the most of next to Prosper, and since she’s going with him on his ill-advised adventure, his motivations for leaving seem important, which is why I brought them up. That’s the closest thing I have to a problem with the plot thus far, though, and really it’s a minor annoyance. There’s nothing I adore about what I’ve seen so far, either, but I haven’t been turned off to it yet, and I definitely want to know where all the mythical creatures come from. Because that’s how the issue ends, with giants and unicorns and harpies and so forth being revealed, living in their own weird communities and hunting “free-range humans.” It’s a good way to close the debut, adding a fresh layer to this distopian setting that makes it stand out from the many other such futures I’ve seen in my comicbooks of late. So even if I’m not enthralled by Hinterkind, I am curious, and there was nothing bad enough in the story to undo that curiosity.

Trifogli is similar as an artist, never screwing the pooch but also never wowing me. His style is interesting, intentionally a little rough around the edges to match the environment of this story. He’s good with people and better with the animals and fantasy creatures, which also goes along with the narrative, since it’s all about the rest of nature overcoming humanity. Not that his humans look bad, they’re actually quite detailed and expressive. But they’re not as interesting to look at as a six-armed giant or a tiger-lion hybrid or what have you. There’s not a ton of action in this issue, just a bit of hunting at the beginning and end, really, but what’s there is very strong. Trifogli captures movement well, and picks good moments to show us, so that these sequences are livelier and faster than the rest.

He also does his own colors, which I always admire, and is especially nice here. The lush greens of the plants contrast nicely with the mostly neutral tones worn by the humans, and the same goes for the bright pink flesh of the previously mentioned six-armed giant. Also, Prosper herself is dressed in mostly green, a possible hint that she’s more in touch with/suited to her world than the rest of the humans we see. It’s not coloring that dazzles or steals focus, but Trifogli uses a gentle palette, inviting us to relax and enjoy our stay in the intense reality of this book.

I’m not in love yet, but I definitely want a second date.