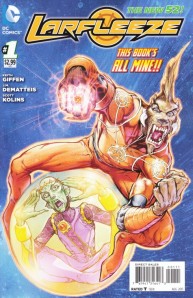 I wanted so badly to like this book, but to no avail, because it’s pretty bad.

Larfleeze relates his backstory to Stargrave for eleven of the story’s twenty pages. Some of it is old hat, some of it we are explicitly told is untrue (though not which parts, specifically, just that about “half” is made up), and none of it is particularly interesting or entertaining. Add to that that fact that Stargrave complains the entire time about how he doesn’t want to listen to this story, and you start to wonder why Keith Giffen and J.M. DeMatteis structured the issue this way in the first place. Larfleeze’s family history, his time as the slave of an invading alien race, his days as a master thief…none of that matters AT ALL as far as who he is now. All you need to know about Larfleeze is that he’s the only orange lantern, and that the emotion associated with orange in the DC Universe is avarice. Part of what appeals to me about the character is the simplicity of the concept, and what made his backup features so strong and funny in Threshold was Giffen finding new ways to play with the character’s single-mindedness. Here, the voice is all wrong, and the story is so dull and disconnected from the present tense that it feels like a throwaway issue.

There is a big, bombastic confrontation at the end that acts as a semi-compelling cliffhanger, but honestly, it should have been the first thing that happened. Had the final five pages been the issue’s opening, this might have been a worthwhile story with some action and heart. Instead, it’s too little too late, and because I have no idea who the villain introduced here is, what drives him or motivates him or his history, I find myself less than eager for issue #2.

If anything is going to bring me back, it’s Scott Kolins’ art. He gets Larfleeze just right, a weird blend of truly menacing and wholly absurd. And the two-page splash of the villain’s entrance is dazzling, intimidating, and also maybe the funniest moment in the issue, because the enormous Laord of the Hunt is surrounded by tiny red goblin things who seem to be carrying his stuff. They add a cuteness to the cosmic giant that fits with the intended comedic tone of the whole issue, even though this is the only instance where I think the humor really lands.

I understand the impulse to do an origin story in a debut, but this is the wrong character for it. Larfleeze needs no origin, and I was much more on board with Stargrave’s protests against the content of this issue than any of the narrative material itself. A not-so-big swing resulting in a huge miss.