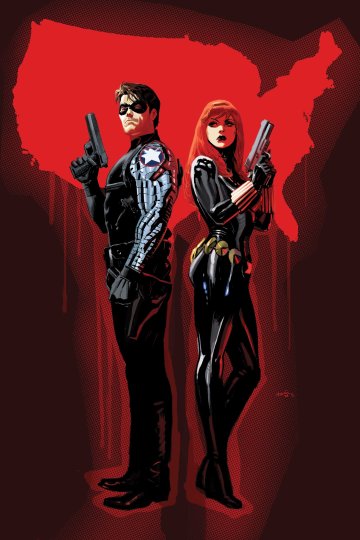 Its been nearly a year since Ed Brubaker and Butch Guice’s first issue of Winter Soldier came out.  Now, 14 issues later, they’ll be moving on and next issue a new team will take their place.

So it took a little while for the series really to pull me in, and Guice’s pencils (along with Bettie Breitweiser and Jordie Bellaire’s colors) took a while as well to grow on me.  Once it did, once the story really picked up, I simply was loving this series.  One of my favorites over the last year, and now I have to say I’m really sad to see this team go.  Next month I’ll be looking at Jason Latour and Nic Klein’s work for this title.  Until then, I can have a moment to let this issue, and it’s conclusion to nearly a year long arc, soak in.

The trip was definitely a fun one here.  Bucky dealing with his past from one trainee, onto the next, and finally onto his main foe Leo.  His work started with Black Widow, slowly over the issues building up just how much she means to him.  Has always meant to him.  Other characters were brought in from a brief appearance of Nick Fury in the second issue, to finally a team up with Captain America, Hawkeye, and Wolverine.  Team ups changed to foes (and I really have to say I loved seeing a brainwashed Bucky taking them on like nothing).

This issue was the wrap up to all that.  The final straw hint of where Leo may be.  They tried to play it safe as Bucky was being such a loose cannon for a while, sending him off to the lowest risk area for Leo and Natasha to be.  Of course they chose wrong.  Bucky knew it, most likely Leo knew it.  Possibly Bucky even mislead them so he’d be the first on scene to confront Leo.  Indeed, it’s what he does.  A nicely handled fight scene in a very iconic location until finally the cavalry arrives.

The ending to this though is the real kicker.  After such a long chase, Bucky finally takes down Leo.  They finally get Natasha back and restore nearly all her memories.  All of them save Bucky himself.  Brubaker’s writing and Guice’s pencils hit their high point at this stage.  You can practically feel Bucky’s pain over this bleeding off the pages themselves.  How through it all, the pain of still losing the one person who meant most to him in the entire world.  It really will be interesting to see how Latour deals with this in the upcoming issues.