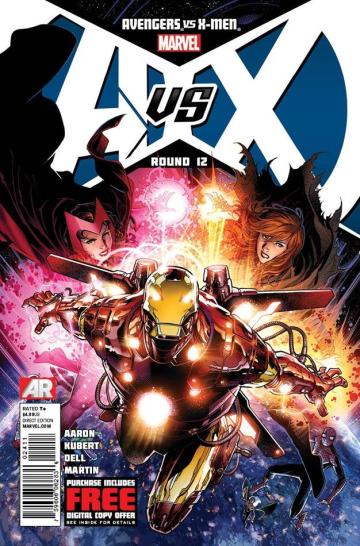 AvX Part 12 is going to be the final part of my AvX review series.  Due to a currently busy schedule, I just don’t have the time to promise an AvX Consequences or A+X review at this moment.  If I somehow get the time, I will, but reviews from me for the next few weeks probably won’t happen.  Maybe I’ll get to a Consequences overview once its over, but I’ve stalled enough.  Without further adue, my look at part 12, and in general the AvX crossover event.  If you haven’t read this yet, be warn of spoilers.

What can I say?  Amazing artwork.  Generally a good wrap up.  Really enjoyed Hope and Wanda’s little stand off.  As before just over a year ago my Marvel stuff was gappy (various trades only), it was nice to really see Wanda get a good lashing for taking out the mutant population.  I’d like to assume she’s been at least verbally assaulted for that before, I just never got to see it.  Either way, the final fight was nicely done (despite my disappointment in how Marvel ended up bringing things to that point.  Getting that moment of the actual Scott breaking free and begging for them to stop him, and the appearance of Jean.  I say Jean for while it would probably make more sense of it being Hope, I mainly like the idea that Scott was able to connect with Jean where she is for a moment, and that it allowed him to pause long enough to be stopped.

What I really do not like here is how Scott is getting so criminalized at the end of this, and of course during it.  There are a lot of variables here, and Captain America admits to at least one (his/Avengers lack of aid to mutants).  Yes, he was destroying the Earth.  But he was doing it as the Dark Phoenix.  That’s another thing Captain America admits, that it was at least mostly due to the Phoenix’s corruption that Scott did those things.  More painful is the seeming ignorance of the events that drove things to this point.  Mutant kind was saved, brought back by Hope and the Scarlet Witch.  If the Avengers did not push so hard to stop the Phoenix and subsequently split it into five X-Men, there is a chance this may never have happened.  Sure Hope didn’t have the Iron Spider/Iron Fist training when the Phoenix was first coming, but she still had been trained her entire life more or less for this event.  If Captain America and the Avengers listened to Scott and the X-Men in the first place, perhaps all of this could have been bipassed.  Maybe they could have agreed to let Hope be trained in K’un-Lun to better be ready in the first place rather than this entire “Avengers vs. X-Men” war having broken out while Hope spent most of it just running from both sides.  Maybe if Steve didn’t jump right in guns blazing with the full Avengers and SHIELD force, him and Scott could have actually spoken things out and realized that maybe also with Wanda’s help they could both restore the mutant population and be rid of the Phoenix for good.

Beyond the distribution of the Phoenix into five X-Men, well they sat around fixing the damn world!  Mutants for the first time I believe was seen as a force of good by basically THE ENTIRE WORLD!  But nope, mutants having a positive view can’t at least last long in the Marvel universe.  Can’t stray from that status quo.  As such, the Avengers just had to keep pushing against them.  Trying to criminalize them and fight them despite at the time the “Phoenix Five” having done nothing wrong.  This is another point where the Avengers pushed them into battle and finally took down the members until the split powers grew more powerful as it was shared between less hosts.  While it seemed that eventually they would have ended up slipping (some quicker than others due to their personalities), at the rate it was going without the Avengers push I feel would have taken a lot longer.  Again, things could have tried to been peacefully spoken through, but they weren’t.  The only real time I recall anyone trying to talk things over with them was Xavier to Scott, and by the time they brought him in it was already past the point that peaceful attempts would be heeded.  There were a few moments that this could have gone completely different.

But no, Marvel had a basic game plan set of wishing the two groups to fight and so they pushed it together by any means.  They simply decided to make Steve and Scott two hot headed leaders and simply pushed for those fights (many of which were badly handled in the AvX fight issues btw).  Yes, Steve and Scott.  While I know both of them are fighters and leaders, I also thought both of them were typically the type to try and talk things out if they could.  Leave the violence for a last resort if possible.  This is why I think it sucks that Scott is being so criminalized.  I understand why he’d go along with it as that is part of who Scott was, to take responsibility for his actions even if he wasn’t really in control of them.  But still, to just have Steve sitting there yelling at him like all of this was his fault when he had a giant hand in how events unfolded himself?  That is pure bull!

Marvel, you should be damn ashamed of yourself.  This concept I thought was extremely amazing, but you handled it horribly.  You had a set goal in mind and wanted to push for it thus coming out with a subpar story, not to mention the already stated many subpar fights and taking a little too long to get things rolling.  And in the end Scott ends up the criminal.  I’d understand it a little better if Steve was upset, but mostly stating they need an escape goat for all of this, someone to put the blame to for these events.  That would make some sense for this issue wrapping up with Scott in jail, but no.  He’s just solely and purely criminalized by Captain America like all the faults that went on in this crossover was Cyclops’ doing!