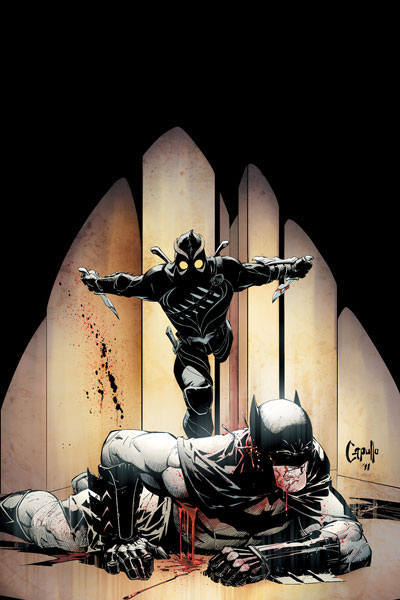 I haven’t reviewed Scott Snyder’s Batman in awhile.  It’s not because I haven’t been reading, or because it hasn’t been worth discussing.  By and large, I don’t review it on a monthly basis because openly gushing month after month would grow embarrassing pretty quickly — and this is a book worth gushing about.  Batman #5 continues Snyder’s winning streak, telling a chilling story that pits Batman against a truly worthy foe in a creepy, surreal, issue-long manhunt.

Captured by the Court of Owls, Batman finds himself wandering an elaborate labyrinth, hunted by a foe he couldn’t defeat at full health and slowly starving.  Not sure how he got there in the first place, not even completely sure where he is, Batman prowls the lavish maze looking for something, anything he can use as leverage against the Court of Owls, even anything that will help him get out of there in one piece.

When Greg Capullo first started working on the book, I saw a lot of criticism about his stylistic choices.  And while it’s true that he lacks the technical mastery and design ambition of J.H. Williams III or the brooding Bat-hunk Finch is using, to me, Capullo’s slightly more cartoonish take was a more instantly iconic look.  And I very firmly believe that, with this issue, Capullo and his art team (Jonathan Glapion and FCO) should have silenced all doubters.  In addition to the wonderfully insane labyrinth – which they use to disorient the reader, too, playing games with paneling and even orientation – they deserve credit for crafting Batman’s subtly unhinged look.  Jumping from darkness to light, from color free to bright splashes of red, the book is a visual feast, and every trick employed just pulls you deeper under Snyder’s spell.

The issue ends with a potent symbolic explosion, and with a child missing his father.  And that’s why Snyder’s Batman: The Black Mirror made our best graphic novels of the year list last year, and why there’s a pretty fair chance his current arc will make it this year.  Snyder is willing to terrify us.  He’s willing to put Batman up against amazing enemies.  He’s willing to give us tightly-plotted stories and decades-long conspiracies.  But he never forgets that the heart of Batman is in the characters.  It’s in Damian, longing for his father.  It’s in Gordon, faithful when no one else is.   It’s in Bruce Wayne, lost in the darkness.

If you read one Batman book, this is the one you pick.