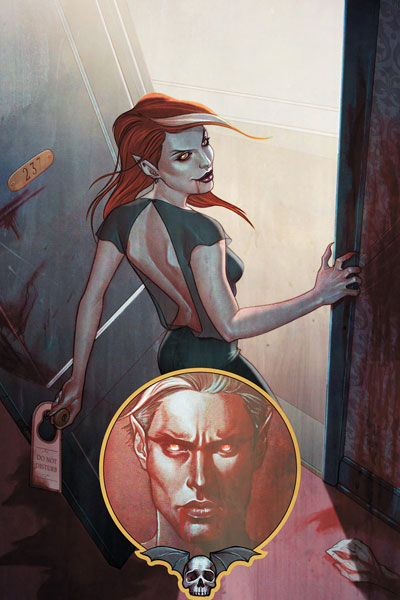 I, Vampire #2, cover by Jenny Frison

Sometimes, love sucks.  A lot.  Though a culture of romantic comedies and pop music have conditioned us to believe that all you really need is love, we all eventually find out that that’s not really true.  You need a lot of things.  You need food.  You need shelter.  You need, above all I sometimes think, a purpose.  When I left for grad school, I had to break my own heart – and someone else’s – because we both already knew what we wanted in life… and we knew that what we wanted took us down vastly different paths in life.  Having a purpose can hurt, but it’s a big part of the drive that keeps us going every day.

Comic book villains don’t exactly have a great track record when it comes to depth, but Fialkov does fantastic work of getting us into Mary’s head quickly.  What she’s doing is wrong, yes, and Mary is certainly not a very good person, but she quickly becomes a sympathetic one.  Cocky, powerful, and at least still a little in love with our hero, she was raised in servitude and with all her power, she’s sick of living in it once more.  Focusing on Mary this issue was a smart move: knowing that she feels the same way Andrew does makes his quest (and their inevitable confrontations) all the more tragic, whereas any uncertainty on out part could have derailed the entire concept.

Last week, detractors complained about the art of Andrea Sorrentino and colorist Marcelo Maiolo, claiming that it was muddy and grim, making it difficult to tell what was happening.  I disagreed.  I think this issue will probably see similar complaints, but the understated grace of Mary and Andrew’s fight scene would have been hurt from the crisper art that dominates superhero comics (and makes many fight scenes bland and borderline senseless, like this week’s in Aquaman) – as is, it has a rhythm, a flow, a sense of pacing lost from most battles you read in comics.  Sorrentino and Maiolo have a fantastic chemistry, and their work suits Fialkov’s scripts flawlessly.

For my money I, Vampire #1 was one of the best new books to come out of the New 52 (and to come out of mainstream comics in quite some time).  Inventive, clever and engaging, it was little more than a long conversation, but it managed to set up the world, the characters and the plot while establishing exactly what kind of story we’d be reading.  I, Vampire #2 is one of the few issues of the New 52 to surpass its opener.   Lovely, memorable art combines with Fialkov’s fantastic character work to create a must-read monthly comic.