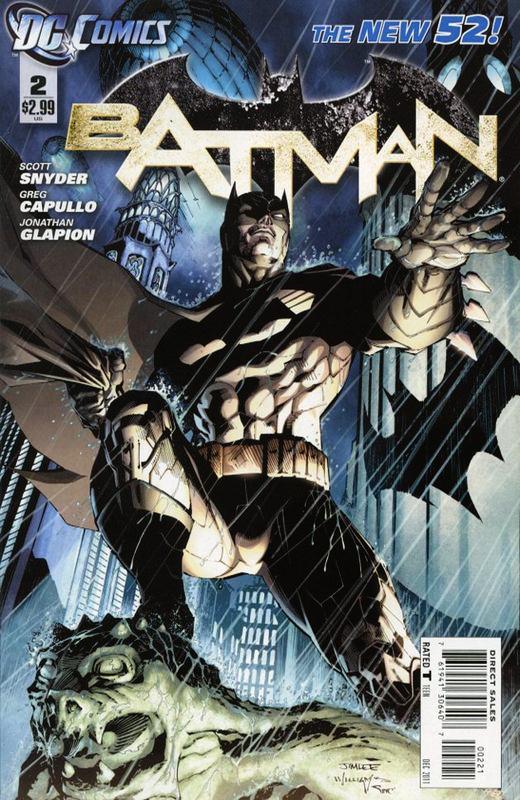 Last month I thought Snyder’s Batman #1 was hands down the best Batman centered comic, but how did he do this time?

Last issue we started with Batman’s look at the city itself.  This issue we get a look at Wayne Tower (built in 1888 by Bruce’s great-great-grandad), which in a sense is also another look at how Batman views Gotham.  It finishes up that there is an observation deck at top with glass that is suppose to be unbreakable.  Of course the very next page we see Bruce crashing through the window to plummet towards the ground with a note that an assassin did it.  For that matter, we see knives in Bruce’s body exactly like those in the body of the victim in issue 1.  Getting a sense that Bruce has lost too much blood to really do anything, this issue then takes a note it seems from Men of War and jumps back to the past.  24 hours to be exact.

After a slight bit of action, Batman visits Gordon at the morgue for the official autopsy report of last issue’s victim.  Well not really visit, apparently Batman is in his cave using systems in the morgue to scan the body so he can see it.  Some nice display of equipment really and even with that, Batman is able to pick up a lot more information than the coroner had.  Biggest thing noted, is one tooth is fake or capped and under it was the Athenian Owl.  The same symbol from the knives used to kill him.

With the call gone, Nightwing shows up and states he recognizes the man who left him a cryptic message.  Considering we have assassins going after both Bruce and Dick, well I have a feeling its a hint towards a group that is going after both of them.  Probably the Owl group, though Dick’s story would state the dead mystery man with Dick’s DNA on him at least would show some of the group wasn’t okay with that idea.

We then move to a private meeting at the top of Wayne Tower between Bruce and Mayor candidate March.  After some pleasantries and March sharing a story of losing his parents as a child, he begins talking about some “ancient and powerful and evil” group that has returned to Gotham.  Before he can say more though, Bruce’s would-be-assassin shows up, knives March, and goes after Wayne.  After a brief scuffle, Bruce gets a note that the Court of Owls sentenced him to death (how nice this court fails in due process), and kicks him out the window.  Interestingly, the assassin jumps out the window to I guess keep killing Bruce as he falls.  Just after saying he loves killing Waynes (huh?), Bruce turns things around.  He somehow manages to land on a hidden gargoyle while the assassin supposedly falls to his death.

Snyder has another wonderful issue here.  I’m absolutely loving it and can’t wait to see what continues next.  In truth, the only downside I have about this comic is Capullo’s art.  It generally is good, but some parts just seem a bit oddly porportioned.  Again too, Dick appears younger than he should be but at least this issue he doesn’t look quite as short.  There was also one slight mistake with Nightwing’s costume.  In one panel there was an arm stripe going down to his glove.  Small things really though that don’t do a lot to detract from a great issue like this.

Red Hood and the Outlaws #2