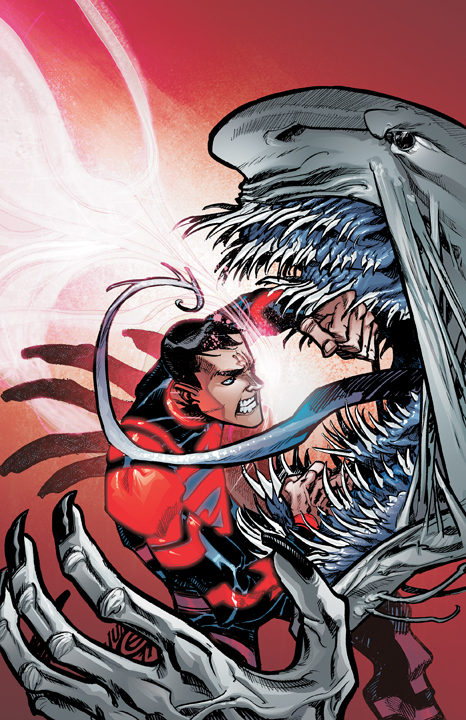 So we begin just after the events of issue 1 with Superboy laying in a ruined lab being held by Red.  Basics?  The attempt to destroy Superboy failed just like it did when they were going to scrap him at the very start and on pure instinct he basically killed (or at least greatly hurt) everyone in the lab but him and Red.  I do like how we get feelings of remorse though – a hint I’m sure for the hero he will become (despite ignoring the burning woman in issue 1).

Soon though, the Calvary arrives to either take Superboy away or kill him, and acting rather smug Superboy instantly disables them without even moving a finger.  His telekinetic powers really are something here and it makes me wonder, will he gain actual Kryptonian powers too like his former version did?  Will he even need to?  Either way, he’s mostly showing his Luthor side right now (the still bald head doesn’t help) when it seems Red steps in and does something to stop him.  I’m not really sure what but maybe those who are more familiar with Caitlin Fairchild (who some thinks Red is) might know better what actually happened.

After a slight reference to Teen Titans #1, we get to see more Rose to point out that Superboy was made to be a weapon, and seemingly hinting that Rose is who she is because she was “born this way” – possible hint she’s still Slade’s daughter?  Either way, we get to see Superboy go on his first hero mission teamed up with Rose.  During the trip we get to see even more of Superboy’s abilities: that he can judge height just by air pressure both in and outside of the vehicle he is in, that he seemingly can sense fear and if someone is lying, and he’s rather sarcastic.

This fight is rather interesting.  We see Superboy not only realize he’s not invulnerable but think in Kryptonian as he gets knocked out?  Despite that, he seems able to think on some level and soon the entire complex is being leveled!

Lobdell’s writing again is nicely done as we get to explore more about this new Superboy.  Silva and Lean’s art and inks are also pretty good.  This is Superboy like I’ve never seen him before and I’m really enjoying it and hope Lobdell keeps up the great work in the issues to come!

One thought on “Review: Superboy #2”