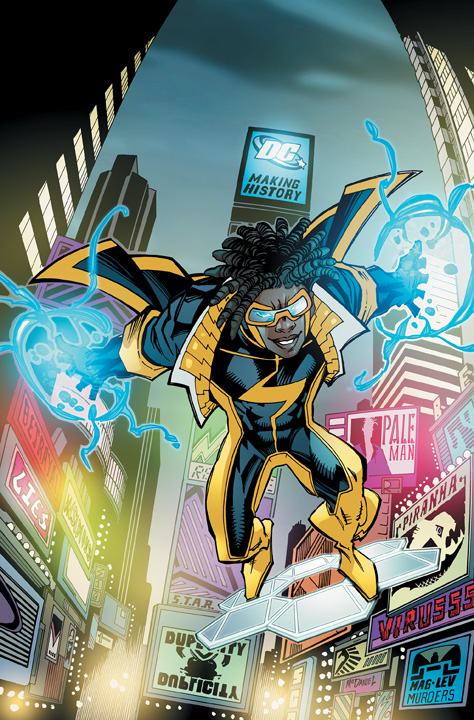 After losing his powers in issue 87 of the 2003-2011 Teen Titans, Virgil had left the world of comics.  Now nearly a year later, Static returns to the DC world not with the Teen Titans, but in his own series.

This is another comic that starts us off right in the action, which by no means am I complaining about.  Static’s inner monologue basically lets us know that he was going through orientation at Star Labs in New York when the attack happened and he slipped out.  Yes, I said New York, but 16-year-old Static and his family apparently just recently moved there from Dakota.

This fight is done rather nicely.  There is lots of inner monologue and talking from Static, but it seems that McDaniel and Rozum are familiar with the character they are writing as everything feels like things Static would say and think.  Pretty much we get to see Static chase this giant ball of energy through New York and using his brains to try and figure out ways to neutralize the energy and finally does so on the Queensboro Bridge.  Okay, I admit a guy going through New York fighting crime while using his scientific knowledge to do it reminded me of Spiderman for a moment, and I hope that trying to copy Spiderman wasn’t the main reason they brought Static to New York.  Getting back to DC though, after Static saves the day he gets his thanks by a bunch of New Yorkers demanding he pay for the damages.  Mostly overwhelmed by how gracious the public is, he almost misses the sniper bullets that kill the man he was chasing.  Taking off in the direction of the bullets we find out Static has a new power of being able to see in all levels of the electromagnetic spectrum.  Or maybe not a new power as he claims he just never let anyone know about it.  Either way, I think it’s a nice edition to Static’s powers and I’d love to see how it gets used in the future.  The ability also comes with a draw back of bad head aches which is also nice as most the time we see metas who have almost no downside to their abilities.

The UV trail Static was following soon vanishes though and we get treated to another new bit of information.  Hardware apparently was the one who got Virgil his internship at Star Labs and Static gets a really nice computer system of some sort.  It isn’t explained how it works, but I have a feeling at least its part of the new glider he is riding on.  The sun sets, and we move to the villain’s lair.  Some odd green guy (Piranha) pissed Static stopped the thief, and suggests that Hawkman will be in New York as well.  Piranha has some interesting people around him including what appears to be a Joker imitator, a police officer, and some girl with enough data at least to show us a “Dakota Daily” picture of Static in his pre-relaunch outfit.  Gives us a nice hint that Virgil’s past at least isn’t completely erased but that does make me wonder how and when he got his powers back as Static.  Just something else with this new 52 that I hope gets answered soon.

We get a little downtime from the action and this is where we get most of the information I gave at the start.  Family just moved to Harlem, Hardware is acting for Static a slight bit how Cyborg was for the Teen Titans.  This I mean as he seems to be a slight mentor towards Static now and is the one supplying our hero with all his cool new gadgets like the new board and his suit which isn’t really explained what it does yet.  Hardware tells Static to go out over Manhattan to which the issue ends with Static being ambushed with what appears to be glowing compact discs. 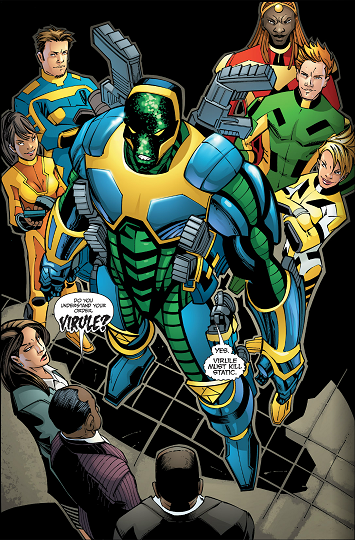 The story is good, action is good, and it definitely feels like Static Shock to me with how it was done.  There are a few lacking points in the comic, like the moment Piranha’s “secret weapon” is introduced made me laugh due to how it was portrayed.  My basic feeling for the comic is that they did a nice job with it.  It’s a pretty solid issue in my book.  Nothing outstanding like I thought Men of War #1 was and I would have liked a little better story for a starting #1, but this is still a very good read and a solid issue.

Before finishing, I do want to touch up on the art here.  Mostly that it isn’t quite my style (nor is Static’s new look) but it generally isn’t bad.  My biggest points are two main bits.  One is in the angle shots (and there are many) a lot of the structures seem to have a slight curve or bend in them which just disorients and distracts me from what is going on a little bit.  The other is Virgil’s feet and ankles.  They often are drawn looking like the tip of a fountain pen.  Basically the ankle will be very thin and then it pops out for the heel before going to a point for the toes.  Besides those parts though, the art is pretty well done both in how it is drawn and the coloring.