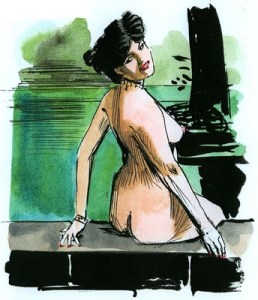 I’m actually getting this thing out on time? It’s a Kwanzaa miracle! This is my list for the top ten stories of 2010! Woo hoo! Now, before we get to all the fun of me voicing my opinions and you disagreeing with them, I have to get a few rules out of the way.

2. These are stories that ended in 2010. They could begin at any time, but as long as they concluded in 2010, they’re eligible.

3. I tried to keep the list as diverse and reader-friendly as possible. I love certain writers, but it would be boring if it was three Morrison books, two Ennis books, etc. So, a writer/artist will only appear once on the list. I tried to spread the love evenly. You will see Marvel, DC, and even Indies on this list.

10. American Vampire: Devil in the Sand

Collected here. Not only is American Vampire the best new series of the year, but Scott Snyder is the best new writer of the year, with nearly all of his comic work being published in this year alone. Good collaborators go a long way, and you can’t ask for much better company than Rafael Albuquerque, Dave McCaig, and Steve Wands. But it’s not just that. Scott himself is working his ass off. He’s no one-hit wonder, as evidenced by his strong debut on Detective Comics. And though the great Stephen King aided Snyder on the opening arc, “Devil In The Sand” proved to be even more impressive. Opening with a new location and new protagonist, American Vampire deceptively started to look like the vampiric Northlanders. But it’s clear now that every story, perhaps every issue, will be strongly involved with the overarching mythology Snyder is weaving for this series. Though only the second arc, Snyder’s already established a memorable handful of characters and his own unique outlook. Which, on a comic about vampires, is really saying something.

Collected here. 2010 saw the highest output of Brendan McCarthy pages since I don’t know when. It pleases the soul to see the old master return, even if two of his stories were throwaway vignettes for House of Mystery and Age of Heroes. And unfortunately, even this great story I’m here to talk about felt the iron claw of editorial strangle some life out of it. But even though McCarthy had to shoehorn Spider-Man in, he made it work wonderfully. As made explicitly clear in his Solo issue and this year’s short story with Matt Fraction, McCarthy owes much to the great Steve Ditko, and the Spider-Man and Dr. Strange characterizations seen here could be the best since Ditko. Spider-Man: Fever is a Silver Age madcap adventure featuring a plethora of evil mystical spiders, all filtered through McCarthy’s own hallucinogenic lens. So buy the trade while you can because it could be another 20 years until we see this much McCarthy again.

Collected here. Apparently, I like Northlanders best in sprawling epic mode, as this is the longest arc since Sven, which also made my list. Brian Wood’s cinematic equivalent would be someone like David Lean. The location is always a character, and often the main one. The descriptions applied to the protagonists in “Plague Widow” could just as easily be applied to its location: cold, harsh, and sorrowful. That Wood could concoct such a complex morality tale with heroines trapped in a village using the viking genre is a testament to his abilities. And Leandro Fernandez’s confident storytelling and wondrous linework compliments the story perfectly. 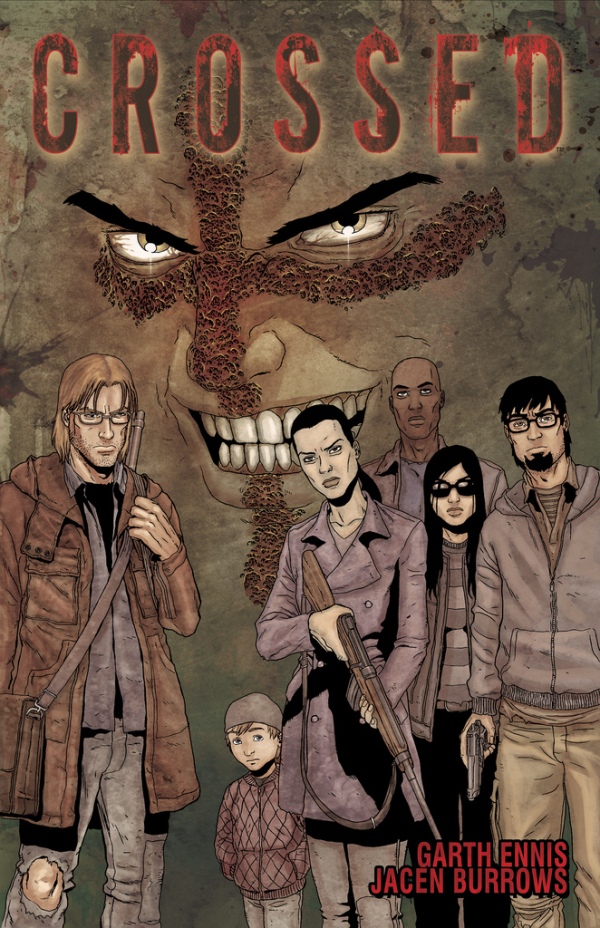 Collected here. This was a good year for Ennis, indulging his war tooth on Battlefields while writing arguably the strongest year of The Boys yet. But when it comes to singular stories that concluded this year, Crossed just barely takes the gruesome cake.  I think most understand Crossed as what was explicitly stated in the beginning, which is a commentary on our current desensitization. That, of course, creates a vehicle for writers to vent their most vile, disturbed, and innermost demonic thoughts and put them on the page. But that’s not all Ennis had in mind, as more of his recurring themes reveal themselves. Ennis also wrote each issue as episodic, mostly laying out examples of his overarching points, but also giving him a chance to play with form, like the issue that’s mostly prose. Similar to the aforementioned vampire and viking genres, the zombie genre is a tough place to look distinctive, but Ennis masterfully pulls it off. Crossed is thoughtful, well-written, and genuinely terrifying.

Collected here. As disappointing as the movie may’ve been, both by critical standards and especially financial standards, let’s not forget that this is also the year when Bryan Lee O’Malley’s innovative masterpiece came to a close. Indeed, this may not have been the finest volume, with too much emphasis put on conventional action, but one thing’s for sure: O’Malley’s artwork has improved dramatically over the course of the series, and this definitely is the best looking volume. So, if this had to be the book with the most manga-inspired fight scenes, at least it all looks so damn good.

Collected here. Was Ellis’ lateness all that much worse than Whedon’s? I don’t think so, but Ellis will soon be replaced by Daniel Way on Astonishing X-Men. That shouldn’t stop you from picking up all three of Ellis’ arcs. They’re still better than Whedon’s run, and better than most X-Men comics. The whole arc operates episodically, with the X-Men overcoming a specific threat each issue, but still building to that gut punch of a conclusion. For all the failed attempts to have superheroes deal with serious issues, few can pull them off as eloquently as Ellis does in this story. The phrase, “Superhero comics at its best” gets thrown around all too often, but it’s genuinely earned here.

4. Batman and Robin Must Die!

Collected here. Why, then, is this story just a bit better? Scope, compression, and visual splendor. On the superhero scene, 2010 was the year of Grant Morrison’s Batman. Andy Kubert, Tony Daniel, and Frank Quitely briefly returned for some fun issues of Batman, Return of Bruce Wayne brought that Final Crisis atmosphere back, and  Batman and Robin was at the top of its game. As that startling image of Professor Pyg is trying to tell us, “Batman and Robin Must Die!” is the inversion of “Batman RIP”. Only this time: Morrison doesn’t need six issues and a prologue, the stakes are higher, and the art is oh so much better.

Collected here. Scalped has earned a place on this list every year I’ve done one, but never this close to number one. Why? “The Gnawing” is a culmination, and Aaron & Guera execute their coup de grace consummately, delivering the best crushing blow any fan of great comics could hope for. I don’t even want to go into all the threads that get tied by blood-soaked fingers by the end of this thing. Just go read it.

Collected here. And so we come to the top two. Both are graphic novels produced by old masters, rendering some of the best work of their careers. They’re also told in similar formats, presented as singular comic strips you could find in a magazine. The Playwright originally appeared that way, yet his story must be taken as a complete narrative. With Wilson, conversely, you may find yourself reading certain strips as they strike your fancy. The two works also share a seemingly similar subject, but Wilson is much less relatable, or is he? What I love about Wilson is that it can be endlessly discussed, more than any comic this year, you could say. Its depths are defined by its reader, and that, coupled with the undisputed quality of Clowes and the myriad of styles he brings to the table, make Wilson something special.

Collected here. The Playwright is a terrific literature/comics amalgam. It’s told in nothing but prose, beautifully hand-written by Eddie Campbell. It also, as I said, is formatted as a series of comic strips. These comic strips form a narrative depicting an in-depth, third person examination of, you guessed it, a playwright. Daren White and Eddie Campbell ruminate on the life of a brilliant and creative man, with all the pitfalls that commonly plague such a person. Eddie Campbell still employs the same great linework he had 20 years ago in From Hell, only now he adds watercolors, and vibrantly colorful ones at that. It’s a career best for Campbell, and his and White’s efforts make The Playwright the best comic of the year.

Casanova is back, thank goodness. This would’ve made the list if they weren’t reprints, but hey, you probably didn’t read this the first time around. Now you can, and in a better form! These reprints have new coloring and new hand-lettering, with a new short story from Fraction and Moon to boot!

You can find my full thoughts here. Wilson and Fox’s biological nightmare is certainly one of the most memorable comics of the year.

The devil is in the material. Joshua Dysart does what he can, but he can’t quite squeeze greatness out of Neil Young’s album. Cliff Chiang and Dave Stewart, however, provide some of the best looking pages of the year.

Is it wrong of me to keep these adaptations off the list on the grounds that they’re mostly art books? Oh, sure, they’re gorgeous art books, and Cooke did a much better job distinguishing his himself this time, but so much of this is just lifted from a novel Cooke himself would rather have you read.

Though uneven, this arc looks to be the artistic high water mark, with Stefano Caselli and Sunny Gho working wonderfully in concert. Gho began experimenting, and Caselli’s work started looking like oil paintings, which glossed over the faults in his linework. And then both of them left, leaving Alessandro Vitti to painstakingly finish the series with anonymous studio colorists. But this was the arc where things looked great, and Hickman started the chain reaction of narrative bombshells that are getting better and better in recent issues.

And there you have it! I don’t know how the hell this year is over already, but, as shitty as the real world may’ve been, the comics sure were good. Thanks for reading!