This is the way serialized superhero comics should be written!

This issue see’s Lex Luthor continue his quest of to analyze the remnants of the Black Lantern’s power rings, which have left traces across the universe in the form of pockets of spatial-temporal abnormalities, in hopes of discovering their structure and replicating them. This quest leads him to the jungles of Uganda this issue, where he becomes the unsuspecting victim of Grodd… or does he?

This issue continues to put Lex’s Machiavellian brilliance perfectly on display. He isn’t especially sadistic but nor does he have any regard for human life beyond whatever utilitarian function they might provide his stratagems. I think this is usually a really tight rope for a lot of writers to walk  Lex but Cornell makes it look effortless.  Android Lois Lane continues to be probably the creepiest character I have read in a long while but also one of  my favorites:

Although she may be the break out star of the book, Cornell rounds out Lex’s supporting cast quite nicely with Lex’s new assistant Mr. Spalding, who plays a pretty great straight man to Lex’s calculated madness. I hope he gets fleshed out more in the future.

This issue has its twist and its turns but it never feel as if its straining to be clever. Overall it is a whole lot of fun especially the brilliant ending (which perhaps I should have saw coming but luckily I did not). I can see how some may think this issue is missing something, some umpf to make it sing. I think that je-ne-sais-quoi will eventually be filled with the black lantern mythology. Usually when blackest night is referenced in stories that I am enjoying (e.g. Justice League Generation Lost) I tend to cringe and then quickly try to ignore; I think the way Cornell utilizes Blackest Night in Action Comics is actually pretty friggin cool, which is a pretty big achievement in my eyes. Although this mythology kind of fell to the wayside this issue and from the looks of things will probably not figure to much into next issue (but really, who the hell knows?) I think that is fine given that this is only the fourth issue of a year long arc consisting of mostly self-contained issues.

Final Grade: A; This is amongst the upper echelon of quality material DC is publishing these days. Also, although I didn’t really mention Grodd to much in this write up maybe this image will convince you of how awesome he is: 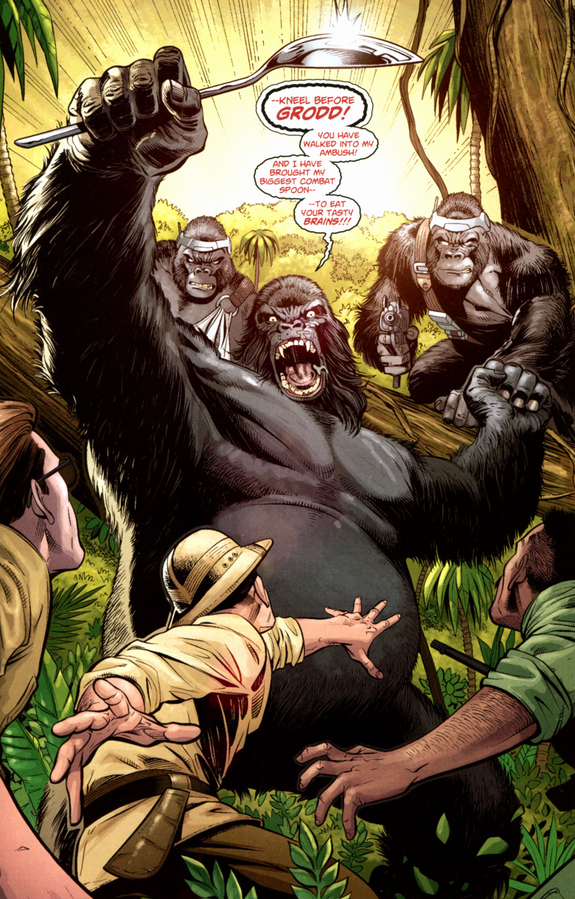