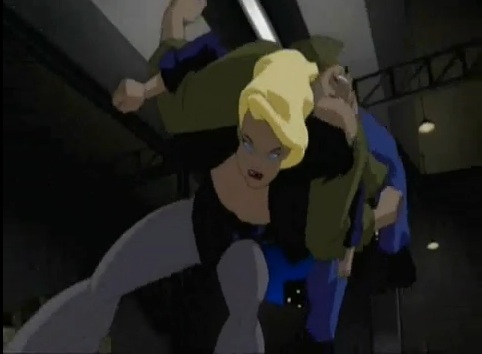 “The Cat and the Canary”

A great many YA/Family TV shows have had a ‘very special episode’.  You know the one I’m talking about.  Preachy, self-indulgent, and poorly paced, most of them involved introducing problems in heightened dramatic circumstances, dealing with them quickly, throwing a PSA at the end of the episode, and then never mentioning it again.  Remember the episode of Saved By The Bell where Jessie got addicted to caffeine pills out of nowhere and then rapidly had a nervous breakdown?  No?  Well, while you were learning physics or going on dates or whatever it is our beloved readers did, I was memorizing semi-obscure pop-culture trash, and that’s why I’m broke and alone…

“The Cat and the Canary” has a leg up on most of them, as it prominently features a bad-ass blonde in fishnets beating the shit out of hordes of enemies, a thug whose head is a confused-looking radioactive skull that’s always on fire, and at least a semi-unique problem to look at, one that fits the temperament of the characters of Justice League Unlimited.  In other words, it’s a relatively exciting episode, and the ‘message’ doesn’t feel like too much of a cheat.  But that doesn’t make it any less damn preachy, and it doesn’t help that this is never mentioned again.

The issues raised here are legitimate.  Not in the sense that it’s really a problem (it is, but so is every Very Special Episode subject), but that they make sure to flesh it out and make it consistent with what we already know of the characters in question.  You can’t be a superhero if you aren’t at least a little bit of an adrenaline junkie – it’s just not possible.  Add to that the natural worries of anyone as they age and begin to feel less energetic, less useful, less able to keep up, and you have a perfect reason for Wildcat to enter these underground fight rings.  Not only does it make sense, it’s downright inspired, which is part of the reason it feels so wasted here.

The episode’s biggest flaw comes to set up the episode’s big conclusion, a fight between Wildcat and Green Arrow.  Black Canary and Green Arrow are fighting a few thugs and supervillains, and they clearly aren’t going to just be ‘let go’ if they lose.  They don’t want to bring the League in, because they don’t want Ted getting in trouble – who cares about all the other people getting hurt in these illegal brawls? – an idea the episode directly contradicts in its epilogue.  Black Canary forces Wildcat to choose: stand with the League, or join the supervillains.  Wildcat chooses to let his lifelong student and friend, along with another League member, get beaten near to death by supervillains so that he won’t have to stop fighting, even though he was trying to quit only two minutes previous.

But that’s the problem with the Very Special Episode.  Characterization, decent storytelling, common sense – everything goes out the window in an attempt to get the message across.  Well, congratulations, JLU: I now know that addiction is probably bad.  Unless what you’re addicted to is crime fighting, and you’re Batman, in which case it’s really cool.

“You happy punching the bags, or you wanna go a few rounds with me?  … I AM referring to sparring.” – Black Canary.

“Well, at least now I understand why you brought me along. You didn’t need Green Arrow – you just needed green.” – Green Arrow, in the episode’s most unintentionally funny line.  Weird as it is, though, it sounds like something Ollie would say.

Justice League Unlimited was always at its best when it focused on melee fights.  If you thought this one had some decent fights – and it did – just wait until season 2’s “Grudge Match”.

“Believe me – fighting’s nowhere near as tough as this is going to be.” – Wildcat. WE GET IT.

“The Ties That Bind (aka Miracles Happen)”

After the stretch of preposterously good episodes in the opening half of the season, it’s disappointing to be four episodes deep into some pretty mediocre ones.  “The Ties That Bind” continues that trend, though it at least is a mediocre episode that brings some interesting mythology into play.  Following Mr. Miracle, Big Barda, and Flash, “The Ties That Bind” takes place largely on Apokalips, chronicling the power struggle between Granny Goodness and Vermin Vundabar in the wake of Darkseid’s disappearance.  It’s an interesting idea for an episode, albeit one that isn’t pulled off very well.

This is the worst of the Flash-centric episodes, but even here, he proves to be the series’ most charming, fun character.  He’s eager to please without being obsequious, fun without being obnoxious, and naive without being… oblivious?  Whatever.  He’s one of the show’s most consistently well-written characters, and that trend continues here.

Barda and Scott are by necessity more broadly drawn, as is all of Apokalips.  The X-Pit’s traps are blown all out of proportion in the episode’s build-up, but when we finally encounter them, it’s pretty standard stuff – robots, a water tank, doors closing quickly, etc….  It’s not exactly the most exciting ultimate death trap ever devised, and it seems like it’d hardly be enough to contain the Flash alone, let alone a pair of New Gods and Darkseid’s brutal step-son.  And indeed, the escape is as anti-climactic as one might expect.

It’s not that “The Ties That Bind” is a bad episode, just that it’s a bland one.  It’s extraordinarily difficult to make “family entertainment” rather than just “children’s entertainment”.  The best Justice League Unlimited episodes, like “The Greatest Story Never Told” or “Question Authority”, manage to turn out complex, engaging stories that fans of any age can enjoy.  But many episodes, many more than I’d remembered in the two years since I’ve watched the show, end up abusing simplistic plotting and characterization, throwing in an action scene, and calling it a day.  “The Ties That Bind” is one of those episodes, wasting a fascinating premise on a throw-away adventure that never has any urgency.

“Oh ye of little faith.” – Mr. Miracle.  And, to be fair, Scott, you clearly used magic to escape that.

I very firmly believe that the reason I needed two weeks off before returning to the series if Granny Goodness’ voice.  Because that’s one, uh, special woman.

“You are about as noble as my armpit.” – Kalibak, master of the comeback.

That was a pretty so-so fight-scene to open the action with. Nice call to the Dog Soldiers, though.  And that’s the second episode in a row to feature, like, 6 people being taken out by a net. This is a strange trend.

“Neither of you signed on for this.”

“Well, I’m not that committed, but I’m with you.” – Mr. Miracle, Barda, and the Flash, in some decent banter.

“The whole world is a prison, you dumb-dumbs, and escape it not an option.” Vermin Vundabar, in some absolutely fucking embarrassing banter.