It had been a long, long time since I’d read this issue when I first put it down on the list of comics I’d be covering on this column.  I was a little worried – would it hold up as well as I’d remembered it?  Was I even really remembering the right issue?  Thankfully, I was, and Mark Waid’s Fantastic Four #60 (vol. 3), remains an essential read for anyone ever curious about who the Fantastic Four is and why they do what they do.  It’s a little too on the nose, at times, but it cuts to the heart of the motivations and characters of four iconic characters quickly, and in an engaging, fast-paced story.

In the afterword to his first collection, “Imaginauts,” Waid comes right out and delivers the mission statement for his run on Fantastic Four – succinctly put, “There is nothing wrong with the Four. Not one of them needs to be scarred or crippled or have their history changed or powers transformed or be replaced with a younger version.  They just need to be surrounded by VITALITY again.”  It was a simple idea, and served as the basis of Waid’s entire run.  The Fantastic Four were cool, interesting, and most of all, unique.  People just needed to remember that.

Fantastic Four #60 served as one of the most potent examples of that philosophy in action.  Waid gets his point across by introducing a one-off audience-stand in character, Mr. Shertzer.  Shertzer works for an advertising agency hired by Reed Richards to revitalize the Fantastic Four’s fading public image.  Towards that end, Shertzer accompanies the Four on a week’s worth of adventures, through which Waid (with a great deal of help from late, great artist Mike Weiringo) gets to illustrate why the Fantastic Four is so damn interesting… and so damn weird.

This is a normal day at the Baxter Building.

One thing Waid makes sure to point out fast?  Ben Grimm isn’t the only ‘monster’ on the team.  They’re all pretty discomfiting people to be around, really.  Being near Johnny Storm is warm under any circumstances, but when he gets emotional, the temperature spikes dramatically.  When Reed stretches, it makes an unnerving, slightly disgusting sound, like rubbing your hand on an expanding balloon.  And while we can see Susan Richards’ force fields, no one else can – and standing a few stories up, protected only by something you can’t see is an utterly terrifying experience, and one that both the Four and we, the audience, have long-since learned not to question.

Really, Waid’s afterward is superfluous, because “Inside Out” says everything he says there, and with a great deal more eloquence.  The Fantastic Four aren’t superheroes, no matter what everyone else in the Marvel Universe and most writers on staff may say.  They’re explorers.  They’re adventurers.  They’re pioneers.  They’re people.  And they’re led by Reed Richards, who they love, and who they idolize, and who they jump into unseen dimensions for merely to satisfy his curiosity… and who can’t forgive himself for what he’s done to them. 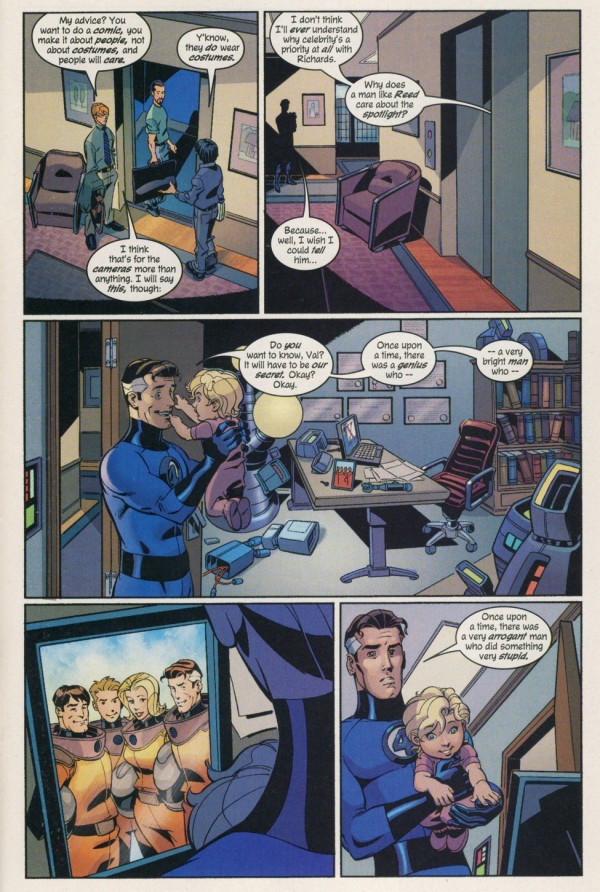 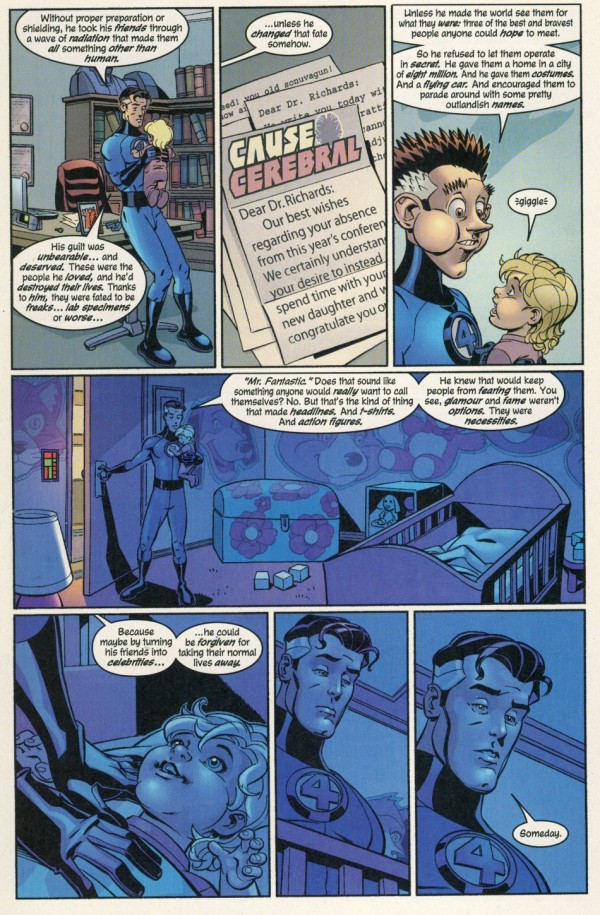 This scene provides the emotional core of the issue, but it also serves as an introduction to the fundamental tragedy of the one of the least dysfunctional superteams ever built: they are all monsters.  But unlike the X-Men, who opted to hide and fight the whole damn world, the Reed took the Four and turned them into celebrities.  He made Ben Grimm, the Thing, the deformed monster who frightens children, into a toy, the subject of rap songs, something both safe and fascinating.  He made women WANT to date Johnny Storm, despite the discomfort of merely standing near him.  He made Susan Richards an object of envy and affection the world over.  He gave them all something to live for, and he did it because, ultimately, Reed loves them too much to let them suffer.  As always, as ever, Reed was doing what he thought was best for everyone around, regardless of what they thought, a character trait that often got him into trouble but can’t be ignored in any introduction to the Four.

The first issue of any series, or of any new writer’s tenure, is at least a little bit going to be viewed as a mission statement, defining what the series is and what the writer hopes it will become.  While it doesn’t always work out and there are often mid-course corrections along the way, few books sprang into being so fully-formed as Waid’s Fantastic Four.  Waid knew what he wanted to do and he got along doing it: tell the Four’s greatest adventures, and let us see them through fresh eyes.  To that end, “Inside Out” serves as the perfect introduction to Marvel’s First Family, and to Waid’s run as a whole.