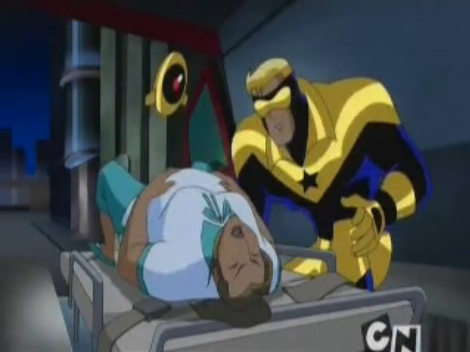 “The Return” is a shockingly epic episode, but not one that lends itself well to analysis.  The plot is simple: Ivo’s android, Amazo, left Earth during the previous Justice League series, and now he’s returning.  Not only is he coming back, though, he’s coming back vastly more powerful than ever before: on his way to Earth, he tears through Oa and the entire Green Lantern Corps as though they were an afterthought, seemingly destroying the planet just by passing nearby.

He’s coming back to Earth, and he’s coming for Lex Luthor.  We haven’t seen much of Lex this season, and right now, he’s playing at being reformed.  He has cancer, you see, and he could die any day – no one knows.  Of course, no one believes Lex has reformed, but the League is determined nonetheless to protect him from Amazo.  This leads to a pair of extremely brief fight scenes that are nonetheless epic in scope – the first of which involves dozens of Javelins, Captain Atom, Orion, Superman, Green Lantern, Doctor Light, two people I don’t recognize, while the next fight involved Fire, Red Tornado, Supergirl, and someone in a mech suit.  Amazo blows through them all, but not before we get a couple good scenes.  Supergirl’s clash with Amazo was brief and ill-advised, and while the mech who tried to fight Amazo didn’t fare any better, I still have to praise that scene for how well-animated it was.

There isn’t much going on here, to be honest, but what is going on is competent and well-handled… and thrilling to watch.  Lex and the Atom make a delightful pairing, particularly as they bicker over what tools to use and how, while the fights are brief and epic.  The series introduces an awful lot of mythology, bringing us Oa, Kyle Rayner, Kilowog and more, and it reintroduces Doctor Fate, Inza and Hawkgirl to people who have just jumped on board with the new series.  Doctor Fate in particular is a welcome addition, particularly as he shares scenes with the Martian Manhunter.  Though the two have extremely small roles in the series, they are definitely the show’s classiest characters.

Still, for all the epic fights – hell, given that it can be presumed that “The Return” refers to Amazo’s return – the star of the show is unquestionably Lex Luthor.  He has the episode’s one genuinely powerful moment (“We create our own purpose in life. Now go create yours.”), and he manages to talk down Ivo’s android pretty handily.  Hell, his the defenses of his secret base are more effective at slowing Amazo down than every warm body the League had available.

In a sense, I think, “The Return” doesn’t really refer to Amazo at all.  No, it refers to Lex Luthor.  Good or evil, sick or well, the episode is a return to form for one of DC’s most infamous characters.  He’s clever, biting, ruthless, and charismatic.  He’s everything you want from Lex Luthor and then some.  It’s a hell of a way to introduce the character to Justice League Unlimited.

I have to say, JLU Lex is VERY smooth.  Divorced from decades of continuity and horrible plot twists, Lex sells his reformations MUCH better.

“Got to hand it to you Luthor… NOBODY would think to look for you here.” – Steel, on Lex Luthor’s barber shop hideout.

“Let’s hope you’ll be more convincing if you have to tell him that.” – Ray Palmer, who is skeptical on Lex’s conversion.

“A blast like that could destroy half the planet.”

“Half a planet’s better than none.” – John Stewart and Kyle Rayner, getting ready to destroy the planet.

“Then for the sake of all worlds, I will continue to seek a better way.” – Doctor Fate.

“No universe, however large, however small, is denied to me.” – Amazo, Rampant Bad-Ass

Hmmm… how interesting.  It seems that the Atom can shrink. Can we confirm that this is a superpower that the Atom has?  Has someone sent this episode to the DC offices/Eric Wallace?

“What the devil is going on?”

“Lex Luthor is saving the world.” – John Stewart and Doctor Fate.  Doctor Fate gets all the best lines.

“I did not destroy Oa. I simply moved it to another dimension. It was in my way.” – Amazo, EVEN MORE RAMPANTLY BAD-ASS

“The Greatest Story Never Told” follows Booster Gold, a never-was super hero desperately seeking fame at any cost, as he goes on a brief adventure that forces him to think about why and how he does what he does, and what being a super hero is about to him.  As Mordru launches an all-out mystical assault on the world, one that draws in every League member available and pulls them away from other business, Booster is left on the side-lines, ordered by Batman to do crowd control.  From there, through a series of mishaps, Booster finds himself helping a beautiful scientist stop a walking black hole from devouring the planet, a problem everyone else in the League never even hears about.

“The Greatest Story Never Told” isn’t without flaws, albeit extraordinarily minor ones, and I’m going to get those out of the way first.  I understand the producers desire not to have anyone die onscreen, but I find it incredibly lazy that they didn’t write around this restriction.  This leads to scenes where the black hole sucks up buildings, cars, and has a hold on Booster Gold as he desperately tries to fly away… but trick drivers just walk on by it without issue.  Similarly, having Skeets get sucked in to create false drama was cheap enough, but immediately reversing it was poorly handled as well.

Still, those are a pair of minor flaws in an otherwise amazing episode.  This is one episode that makes near-perfect use of Justice League Unlimited‘s extended cast by doing a day in the life of an F-list hero, someone who’s despised and disrespected by everyone involved.  It ignores the pedestrian standard Apocalyptic Battle to take a look at something smaller, running almost as a satire of the show on the whole as even the relatively mundane task of putting a collar on a man is intruded upon by random villainous shenanigans, everything from getting run over by a train to a giant, evil building trying to devour people.

In a way, it’s similar to the one of the best Buffy the Vampire Slayer episodes: “The Zeppo”.  “The Zeppo” follows goofy everyman Xander through a day in Sunnydale, and while Buffy, Faith, Giles, and the rest of them run through a melodramatic End of All Things scenario, Xander has a smaller, but no less pressing, adventure by himself, experiencing the weird things that get ignored while everyone’s looking at the bigger picture.  “The Greatest Story Never Told” mines the traditions of Justice League and Justice League Unlimited in much the same way.  It’s a brilliant device, albeit not one the series uses often.

Still, when you have an episode this good on its own, you don’t need to.

“A hero who’s a thousand percent committed to the fight against evil, and… and… you have no idea who I am, do you?” – Booster Gold, in the story of his life.

“… I thought you were Green Lantern.” – Random Kid, who is apparently completely color-blind.  He does set up the episode’s best running joke.

“One time, I disguined myself as a vase.  For three days!”

“Okay, maybe not. Who’d want to, anyway? But I am a detective, which means I’m like Plastic Man and Batman rolled into one.” – Elongated Man and Booster Gold

A great cut – “I believe adventure is right around the corner!” followed by Booster helping an old woman read a map.

“She’s beautiful.  And in distress – my favorite kind of damsel.” – Booster Gold, you creepy bastard.

“It could destroy the world – all worlds!”

“This is so up my alley!” – Dr. Simons and Booster

“… I’ve got nothing.”   Booster and Skeets work preposterously well together as a comedic duo.

“Sir, according to my thermal sensor readings of Dr. Simons, you just  missed  a prime opportunity to, well, I believe the phrase is, kiss the girl.”