“The Best Defense” is the fifth volume of The Walking Dead, and it’s pretty different from what’s come before.  Previously, each volume was a solid stand-alone story.  Yes, each one built off of everything that came before, and did so VERY, very well… but they were nonetheless essentially standalone stories.  You could conceivably read, enjoy and understand “Safety Behind Bars” without having read “Days Gone Bye” or continuing on to “The Heart’s Desire”, and while you’d miss out on some interesting and important character development, I think you’d find each story enjoyable in its own right.  But while “The Best Defense” is an engaging, enjoyable read, it’s also almost purely wrap-up from the previous arc and set-up for the next one.

Let me say up front, I came into this pretty excited.  I’d heard of the Governor before – IGN rated him as the 86th best comic book villain of all time – but I knew almost nothing about him.  Was he an intelligent zombie, like Land of the Dead‘s “Big Daddy”, or a normal human?  Was he the leader of an outside force, or was he someone who rose to power within the growing prison community itself?  I had no idea, but he was often mentioned by people when they talked about the series, so I was excited.

Well, “The Best Defense” introduces us to the Governor, and he’s a mean one.  He’s also the first character we’ve met who could be described as purely villainous, almost preposterously so, something I do kind of hope the series rectifies in the future.  An arc (or even an issue) illustrating the Governor’s rise to power, for example, would be a fascinating read, and one that would go a long way to giving us some sort of sympathy for a character that’s so ridiculously eeeeeeeeeeeevil.

But enough of that for now.  What’s going on with our survivors this week?  Well, the first half of the story is almost entirely about them moving on.  Carol, moving on from Tyreese and his betrayal.  Allan’s twins, moving on from their father’s death.  Tyreese, moving on from his relationship with Carol.  Everyone has something that’s holding them back, holding them down, but for awhile, it looks like the good – a generator! DVDs! crops! – might outweigh the bad – the dead rising! murder! (okay, the good probably won’t outweigh the bad for some time).  The only one who can’t seem to let go of the past is Rick, who can’t forgive himself for Allan’s death, among other things.

Rick has become... I don't want to use the word obsessive, so, uh, 'passionate' about home security

But then, something happens.  A helicopter, smoking, passes overhead.  Rick is thrilled, and for obvoius reasons – it’s the first real sign they’ve had that, not only is there someone else alive out there, but there’s someone else alive out there who might be well-equipped enough to actually begin to handle the zombie outbreak.  When the helicopter goes down, it’s a matter of seconds before the already-dressed Rick and Glenn, joined by a machete-equipped Michonne, are leaving the safety of the compound to track down the helicopter, rescue any survivors of the crash, and learn where they came from.

There’s another big development, but, once more, it doesn’t have huge repercussions for this arc, but for the future: the discovery of riot gear, armor that effectively zombie-proofs the wearer.  It’s exciting news, and it is made use of immediately here to travel further than before, without fear.  The end of the arc leaves me fairly sure of what it will be used for, though.

As we soon learn, however, the riot gear and rifles they’ve found will have to be put to different use soon enough.  In chasing down the helicopter, they find that the crash survivors were taken.  And in tracking down those people, they arrived at a small, heavily-armed, well-defended town led by the Governor.  At first they were thrilled – these people had order, electricity, food – they had gotten back all the trappings of a society everyone thought lost forever.  To Rick, Michonne, and Glenn, it must have seemed like heaven, but that was an impression that didn’t last terribly long

You see, the Governor is not their friend.  The Governor is a sadistic madman who rules over his settlement with an iron fist.  He’s turned into a warlord, keeping his population entertained with bloodspot and murdering any strangers they find to feed the pet zombies they use to  make their arena fights interesting.  His settlement is better armed, better fed, and larger… and he knows that Rick and his travelers couldn’t have come from far away.  And he’s willing to do whatever it takes to find out exactly where that is. 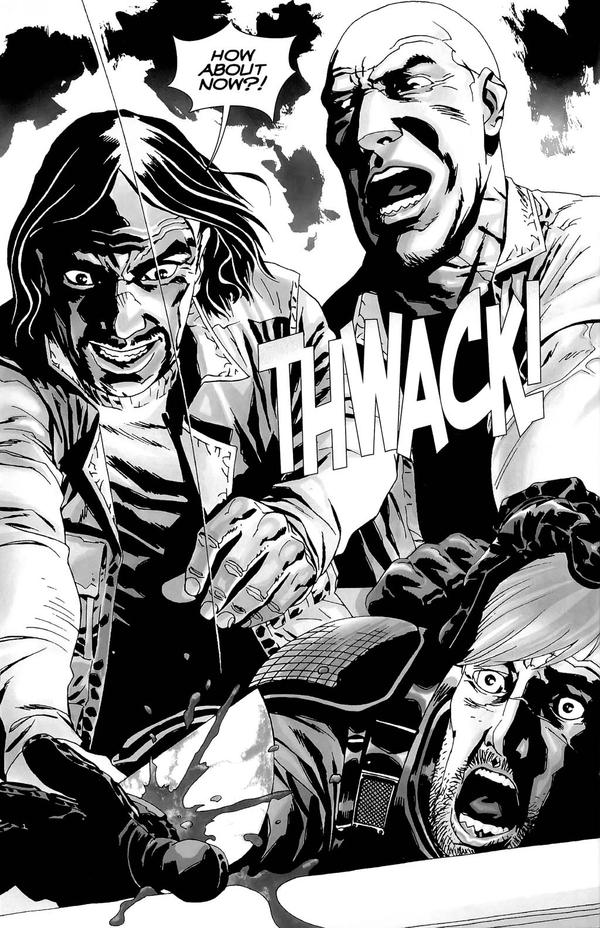 If nothing else, this arc pretty aptly illustrated what I believe to be the primary ‘goal’ of the comic: to look at how societies evolve, from essentially nothing and under some of the harshest situations imaginable.  The Governor’s rise to power was predicated on comfort.  He keeps his populace entertained.  He feeds them.  There’s no need for money, now, and you’ll never really want for anything.  In return, they let him do whatever he wants.  It’s a powerful and well-stated look at just how much people are willing to ignore in the name of fear and comfort, but there’s a definite allure to the familiarity he offers, the trappings of a society long thought dead.  In a way, the Governor’s settlement is itself a zombie, a heartless, bloodthirsty shadow of  the small American town.

Of course, part of what keeps Kirkman’s story alive is the people.  No one wants to read a sociology experiment, after all, and I doubt most folks would enjoy writing one.  So it helps quite a bit that Kirkman has a solid handle on all his characters and isn’t afraid to show the ramifications of their decisions.  It’s telling, in particular, to look at the Governor in the light of Rick’s most recent character arc.  Rick, who was violent, self-absorbed, and murdering anyone who challenged the group’s safety, was well on his way to becoming everything the Governor is now.  Without Tyreese, without Lori and Carl, Kirkman seems to suggest that Rick was just another Governor waiting to happen.

Kirkman is a little too obvious about the similarities between Rick and the Governor, just like he’s a lot too obvious about how terrible the Governor is.  When the Governor, who had been wearing us down with friendly, well-written banter, finally revealed his intentions, it was a suitably chilling moment.  And when he lopped off Rick’s hand, it was a shock, and a well-handled one.  But then he repeatedly beat and raped Michonne.  And tormented Glenn.  And so on and so forth, over and over – it grew more tedious than shocking or upsetting, as though Kirkman so relished the chance to take the book’s darkness off the deep-end that he dove right in and never looked back.  And so a bizarre, chilling moment – the Governor walking home to his chained-up zombie daughter, then back-handing her when she attacks him – is followed by one preposterously over the top – the Governor’s collection of severed heads, treated like TV.

For all the interesting things going on here, this is the first time I really think writing for the trade really hurt The Walking Dead.  Six issues of emotional fallout would’ve stalled the story in its tracks.  Doing the entire The Governor arc in one arc would’ve made it feel rushed.  But this feels like the second film in a trilogy, with no real beginning and no real end.  Not bad at all.  If anything, it shows growth in his handling of the drama and dialogue.  Just… incomplete.

Coming Up July 9th: The Punisher MAX: Up Is Down and Black Is White

Coming Up July 23rd: Scott Pilgrim Vs. The World

2 thoughts on “The Unread Canon #9: The Walking Dead: The Best Defense”