The Return of Bruce Wayne #2 hit the stands Wednesday and it was f*ing awesome.  I don’t review Grant Morrison’s work because, by own admission, Morrison’s writing reduces me to a rabid fanboy. In keeping with this tradition, this is not a review, a recap or even commentary on the story. I have left those tasks to more capable writers than I.

If you permit me, I want to get a bit panoramic and talk about the idea of an Oeuvre. As I was reading David Uzumeri’s fantastic Annotations: ‘Batman: The Return of Bruce Wayne’ #2 it dawned upon me: one of the reasons Grant Morrison stands out as one of the mediums finest writers, of all time, is because for the last 20 years or so Morrison has been diligently constructing his Oeuvre at DC.

What do I mean by an Oeuvre?  Dictionaries usually give one of the two following definitions: 1) a work of art 2) a body of work; the total sum of output produced by an artist, writer, or composer.

I am going rely on a slightly modified, modified in order to account for both the periodical nature of comic book writing as well as the comic book industry’s division into two mainstream publishing houses and a myriad of smaller independent publishers, version of the second definition. I propose the following definition of an Oeuvre: a body of work, displaying an underlying unity, that not only originates in a shared universe but irrevocably refashions the precepts of that such universe. 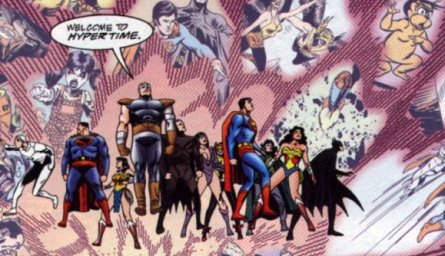 With this latest mini-series, we can now add Morrison to this illustrious list. His oeuvre ranges from as early as Animal Man (and perhaps JLA) to the Kingdom, 52, Seven Soldiers, Final Crisis, Batman, Batman And Robin, and now Return of Bruce Wayne. More-over the goal of his oeuvre, which firmly stated is summed up by Morrison’s much repeated maxim “It’s all in-continuity,” is finally coming to full fruition.

Provoked by Damon Beres’ Return of Bruce Wayne and a Comics Manifesto, Jay Galette had the following to say about Morrison’s run on Batman:

The Return of Bruce Wayne isn’t just a story about Batman testing himself through time, it’s about Batman being reborn and rebuilt through time. This is a man who we have seen do the impossible yet there are still fans who cry “Batman shouldn’t be time-traveling or fighting aliens! I like him more grounded!” So Grant Morrison is taking him and putting him through an impossible paradigm to give birth to a new Batman – one whose origins lie in Bat-demons, the spite of an evil fallen god and history itself.

What does it mean for superhero comics as a whole, when the only way we can accept a man handling the impossible is by seeing him birthed through it? What does that mean for us as human beings and things we think mankind can handle?

Morrison is trying to change the way we think about Batman so that we can take in all those crazy stories from the 50s that no one ever talks about. This epic sweeping story he’s writing is all about making us willing to accept any and all stories about he Dark Knight.

…when I say he wants us to take heroes less seriously I don’t really mean the heroes individually, I mean the concept of superhero all together. There’s been a lot of things built up around it and the worst ones are easily the notions of continuity and I guess what I’d have to term as being “genre-walls.

I vehemently disagree with Gallette’s conclusion despite absolutely agreeing with his analysis. I was with him up until he stated that Morrison wants us to take comic books less seriously. What I believe Morrison to be up to is nothing short of a radical restructuring of what it means for a superhero comic to be taken serious. Since, perhaps, Alan Moore’s deconstruction of the superhero genre with The Watchmen the experience of what a serious superhero comic book is has been synonymous with the application of a certain modernist literary technique: psychological realism.  The dark, grim and gritty stuff is only an epiphenomenon. Perhaps an inevitable one, given that once a genre turns to psychological realism its defining trope tends to become trauma, but none-the-less it remains secondary.

The introduction of this element is a true literary break and as with all literary breaks once introduced you can not write in the same vein again. What I mean by this is not that bronze and silver age-like stories can’t be written but that they are no longer experienced the same way, at worst the stories just seem naive or at best they are retro, homages (but thus still in the domain of the inauthentic).

Grant Morrison project is not to construct a universe that returns to the sensibilities of those wacky 50’s stories but a universe where they are admissible. A comic book medium where the zany 50′s stories are accepted after the Watchmen is not the same medium where they were originally produced. Here, I would like to refer to what in philosophy is referred to as the difference between negative and indefinite judgment. As fans’ of Robert Kirkman’s the Walking Dead know very well there is a difference between someone being not dead and someone being undead. The positive judgment “that person is dead” can be refuted with the negative judgment “that person is not dead” or with the infinite judgement “that person is undead.” What this infinite judgment does is open up an alternative to what appears to be a deadlock between binary opposition.  What we have in Morrison’s oeuvre is precisely this attempt to open up an alternative to a certain deadlock in modern (superhero) comics. To break it down,  (positive judgment) modern comics (unlike Silver-Age comics) are serious, (negative judgment) We should not take modern comic books seriously, (infinite judgment) We should take silver-age comics seriously. Obviously this does not mean a simple application of what made modern comic books appear serious; it means completely rebuilding from the ground up (thus displacing psychological realism), the experience of serious comic book storytelling. This arduous task is reflected, as Jay pointed out, in Bruce Wayne’s own journey through his history into his present. How fitting then that his return threatens to destroy the world?

Regardless of whether Morrison is successful in this overall goal, Morrison is a great writer because  for years he has utilized the periodical, as well as serialized, nature of comic books to tell great individual and self-contained stories but that also deliberately build on each other to give us an unexpected sum that is so much more greater than its parts.

2 thoughts on “Grant Morrison and the Oeuvre”