“Initiation”, “For the Man Who Has Everything” 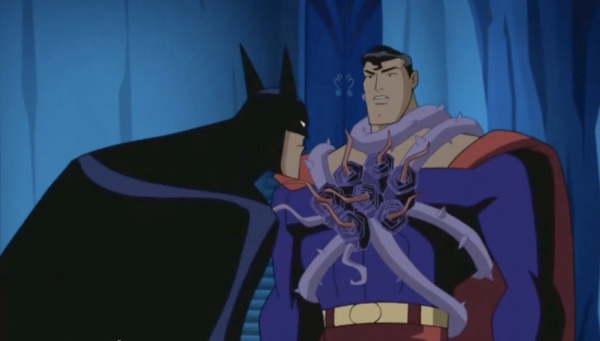 “Initiation” opens with a relatively well-shot (albeit really quite goofy) fight between Green Arrow and a group of surprisingly well-armed, violent supermarket robbers.  The fight doesn’t have much of a purpose beyond showing us how Green Arrow operates.  It’s quick and fun, and it sets up the fact that he has a dozen different ‘trick’ arrows (whatever, in fact, the plot calls for) and no actual pointy ones.  John Stewart as the Green Lantern shows up, saves his life, then whisks him away to the League’s massive Watchtower in space.

From there, the episode hops into action in relatively short order.  Say what you want about the quality of the plots, you certainly can’t claim they wasted time getting to them and getting through them.  Decompression might be all the rage in modern comics, but in the DCAU, they set ’em up and knock ’em down in short order.  The Watchtower is picking up a bizarre heat source moving through the fictional country of Chong-Mai, so they send Green Lantern, Captain Atom and Supergirl off to investigate.  Green Arrow, not trusting ‘the Man’s’ teleportation device, opts to go with them, and they agree to drop him off after the mission.  This of course does not go well.

Green Arrow saves their lives, disobeys orders, and then saves even more lives as the League tries futilely to navigate the thin line between fighting the rampaging giant monster and obeying the wishes of a militaristic country who desperately wants to pretend like they didn’t construct and then lose/enrage a rampaging giant monster.  This entire conflict rang a little hollow to me.  They never ask the American government for the right to intervene – in fact, they’re in direct confrontation with the government more than once through the series.  They are, after all, vigilantes.  Denying back-up on the basis that their help wasn’t requested seemed like just one more artificial hurdle to increase drama.

The animation of the rampaging giant monster was solid, looking both semi-intimidating and toy-like, and his quick fight with Supergirl was pretty exciting.  The second fight, however, was far too brief and contrived, particularly with Captain Atom’s sudden wardrobe malfunction.  The fight’s solution – get arrow-like object into target-like hole – was a little too specifically tailored to convince us that Green Arrow has a place on the League.  I understand the need for the show to make this point, but I think that this was a) a bad way to open the season/series, and b) too ‘cute’.  There are a dozen ways to make someone like Green Arrow appear to be a valuable asset to the team, and I think that a once-in-a-lifetime villain whose only weakness is a metal shaft in the gaping hole in his chest really doesn’t get that across.

It’s not a terrible episode, but it definitely isn’t a good one.  For a series that already technically had 2 full seasons under its belt, I could definitely see the lack of confidence in this one.  They clearly weren’t sure if a series could be carried by guys like Green Arrow and Captain Atom, and I don’t think this was a very good argument in favor of the concept.  Thankfully, it doesn’t take them too long to find their footing, but if this was the first episode I ever saw, I’m not sure I would have tuned in for a second.

“Each of you brings something different to the table.  Strength.  Speed.  Stealth.  …whatever.” – Superman, at his least inspirational.

“Those monsters you don’t fight?  They tend to step on little guys.” – Batman, giving the best defense I’ve ever heard against Ollie’s mistrust of the League’s size and scope.

“The State Department sure was right about them not liking foreigners.” – Captain Atom, at his cornball best.

Is it just me, or was John’s put-down of Supergirl at the end utterly uncalled for?  I don’t really remember her showboating much, and he really friggin’ tore into her.

The Watchtower/Javelin CGI was really bad.  Sign of the times, I suppose.

“For the Man Who Has Everything”

This was an odd choice for a second episode.  Not a bad one, per se.  I have a hard time imagining that a story based on Alan Moore’s and Dave Gibbons’ classic single issue could be considered ‘bad’.  But odd?  Definitely.  The premise of Justice League Unlimited has always seemed to be a focus on more epic action and more varied characters, but this focuses on the League’s core three members, takes place entirely inside the Fortress of Solitude, and has a miniscule supporting cast.  It’s definitely a strange choice for their second episode, and feels a lot like something they’d always wanted to do in Justice League but hadn’t had the chance.

Despite that, however, “For the Man Who Has Everything” is an enjoyable episode through and through.  It keeps its changes from Moore’s comic relatively small – cuts out Robin, as the Teen Titans never appear in JL/U due to having their own cartoon, Batman and Wonder Woman bring different gifts, and cutting out the bulk of the relatively disturbing Krypton dream plot – but even streamlined, the story holds up to scrutiny.

The episode also illustrates a vast improvement in the fight scenes over the last episodes.  While Supergirl’s fight with Giant Evil Atomic Robot and Green Arrow’s fight with… uh, masked robbers… were alright, they never even came close to matching the visceral excitement of Wonder Woman’s ill-fated showdown with Mongul, or Superman’s enraged battle.  They’re quick, with neither confrontation ever becoming the focus of the episode, but they’re also well-paced, well-illustrated, and extraordinarily exciting.  Also, it’s not often you get to see a petite woman in a bathing suit do a German suplex on a 7 foot tall yellow monster, and I think that has to count for a lot.

There are, of course, some clumsy moments.  While Superman’s dream-world hints at some of the darknesses Moore’s story really fleshed-out, it feels half-formed at best in this episode, giving us a few cursory scenes with Superman’s family and a conclusion (“But Van… I don’t think you’re real!”) that feels unearned before cutting it off.  Compare that to Batman’s hilarious fantasy land, where his father beats Joe Chill up… and then keeps beating him up long past the point of sense.  That fantasy takes a dark turn at the end as well, and the payoff is vastly more emotional.

Moore fit an awful lot of story into that one issue, and the writers have to use short-hand to fit it all into a 22 minute episode.  They largely succeed, but you can see the seams.  Still, while this episode lacks the ‘larger cast and larger action’ premise of most of JLU, it’s still an exciting, well-crafted episode.  I would have waited a little while to air it, but I always enjoy watching it anyway.

“No. Cash.” – Batman. One of my favorite things about the series is its ability to mine Batman for comedy.

“I couldn’t get you off this farm if I exploded a quantum bomb under your…” – the Black Mercy (via fantasy wife) is a huge dick.

“How remarkable. You animals really are almost intelligent, aren’t you?” – Mongul, who spends most of the episode growling hilarious/awesome one-liners.

“I’d advise you to try the plasma disruptor – it’s more of a woman’s weapon.” – Mongul, who has truly mastered the art of the Earth put-down.

“Happy birthday, Kryptonian.  I give you… oblivion.”  “Burn!” – Mongul and Superman, trading some of the best combat banter in the series.

I get why Superman’s fantasy wife is a red-haired Lois Lane, I guess, but why does fantasy Brainiac prevent him from getting lucky with his own fantasy wife?  Either the TV writers are suggesting something about Superman, or the Black Mercy really is kind of a dick.

I like Mongul monologuing about how he won’t hesitate to kill Superman as he hesitates to kill Superman just so he can monologue.  Dear writers: this is why these things only work on the page, not in action.

1) I hope to continue this in the fall, where, if there’s interest and I can manage it, I will be doing this feature for No Ordinary Family, The Cape, and possibly season 2 of Human Target.  The switch from comics to TV comes because I can no longer afford comics on a monthly basis (at least for now), but an Internet connection?  Well, that I have, and I don’t need much more to watch TV.  My fellow contributors brucecastle, YWz and lebeau will  be able to keep providing you with your weekly dose of comic book reviews, and I’ll try and keep up with my other columns in the meantime.

2) Justice League and Justice League Unlimited are the only two DCAU shows I’ve seen in completion, and the only Marvel cartoon I ever saw was the classic X-Men.  I’m going over JLU first because, well, I already own it… but if, in the future, you’d like me to watch, review and discuss other shows, sound off in the comments!  If I don’t hear anything from you guys, the next DVD set I do will probably be in the winter, with ABC Family’s The Middleman.