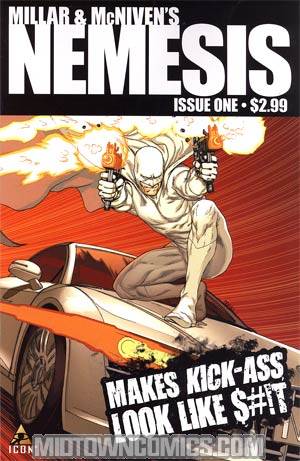 Mark Millar has made a career of trying to recreate, in increasingly colorful ways, Ellis’ brief run on The Authority.  This isn’t meant as an insult – The Authority set the bar for faux-edgy blockbuster-style action comics, and it set it high.  There are worse books to emulate.  Some of his work succeeded in tapping into that same zeitgeist; some didn’t.  But there’s one word that few people would use to describe Millar’s work, and that word describes the opening issue of Nemesis perfectly: bland.

Steve McNiven, who collaborated with Millar on the long-delayed Civil War and Old Man Logan, does raise the book up a bit.  The costume of the titular villain should be visually dull, but McNiven so inhabits Nemesis with relaxed confidence that the simple, all-white costume stands out in all the right ways.  The action scenes, disappointingly brief, are reasonably well-done, though McNiven displays a great talent for more widespread devastation.

Nemesis isn’t a genuinely bad first issue.  It’s got fine art and pacing, and a sense of confidence that’s rare for opening issue’s.  What it doesn’t have, though, is excitement.  Nemesis is billed as a super-genius, but Millar takes the easy way out – we first meet him at the end of what we’re promised is an elaborate plan, with everything working, and when next we see him… he is at the end of what has to be a pretty damn elaborate plan, with everything working.  There are no technical moments in saying how he kidnapped the President.  There’s little in the way of characterization or plotting, little sense of real danger, and most damning of all for Millar’s genre, little in the way of memorable action scenes.