I was a terrible fan on FCBD. I didn’t even go to a comic shop. You know what I did? I spent the day hanging out with friends. New friends, old friends, beer, sports, and girls culminating with the Manny Pacquiao vs. Ricky Hatton fight. Yeah, remember how that went?

Sorry, that’s actually when Hatton got knocked out by Mayweather, but you get the idea. We got what? Five minutes of boxing? I would’ve asked for my nickel back, but I watched it at a friend’s house. For those who did throw down the money, blame Hatton. Anyway, my FCBD was spent doing the most non-comic book things ever, but I still got my books. Be friends with your comic book guy, kids.

Atomic Robo: I’ve heard that this was good, and it is. The nice, clean art and sharp writing is impressive. It left me wanting more. Sadly, even though it’s huge on the cover, this story wasn’t the longest in the issue.

Drone: This was the longest story. I’m a bit underwhelmed. Average art and writing, with a ton of words isn’t the best sales pitch. It’s a bit of an interesting concept, though.

We Kill Monsters: I don’t know what to think of this. It just didn’t really hook me at all. It’s not bad. 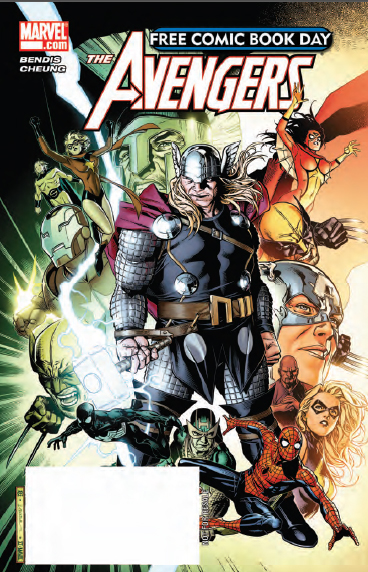 For a book with both New and Dark Avengers, this isn’t in continuity, is it?

This book has way too many words for kids and new readers.

Why is this book rated teen? Why not write for kids, Bendis? Why the swears?

Why does Spider-Man mention global warming? It’s not even a joke. It’ll just offend adults and confuse the kids.

This book was so damn wordy, and yet it still didn’t introduce all the characters.

Other than all that:It’s pretty good. I mean, it’s Jim Cheung drawing 24 pages of Avengers action. Throw in Thor, and you actually have a memorable FCBD comic. Oh, and we get more pages in this issue than we do in a four-dollar Avengers comic. And why is this book at reduced-size? Every publisher, large and small, is printing normal size, but Marvel? Tiny comics! Boo! 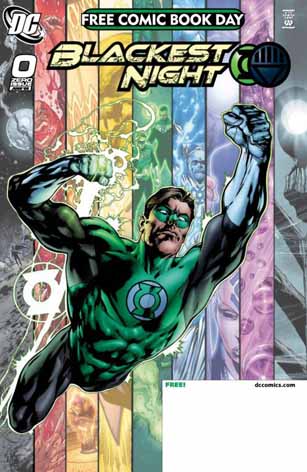 Some publishers, even the tiny ones, will put out an issue #0 for three bucks, but DC? They put out the #0 of their big, new event for free. Way to go DC! Wednesday Comics, three-dollar comics, and now this? Is anyone still reading Marvel? As for the actual issue, I would have liked to get a good look at all of the corps. We do get that, in a way, but those pages have been online for weeks. I even posted them. What we do get, is a nice conversation between Hal and Barry, an exploration of some of DC’s dead characters, and the Black Lantern Oath. Throw in some sweet Ivan Reis art, and you’ve got an awesome package. Oh, and for those who have been noticing my bitching about Aquaman being brought back in Final Crisis, that’s actually addressed in this issue. Apparently, those were just rumors. BUT I SAW HIM WITH MY OWN EYES! Oh well, way to screw with Morrison’s vision, DiDio.

“The Simpsons” is my favorite show. Having said that, I don’t think I really laughed once while reading this. That’s bad. The comic is free, features nice art, and may entertain children. That’s good.

Brave and the Bold: Entertaining, adequate art, and the kids are the hero of the story, that’s awesome. Also, just like the cartoon, it features a relatively unknown villain, the Thinker. Although, I think Batman and Blue Beetle kill him in this story. What’s up with that?

Tiny Titans: I’ve read this comic before and it’s very fun. I dig the art, too. This one? Not so much. It’s still awesome, and if any of you have kids, this is a good comic.

I have a friend who absolutely adores this book. Well, he used to. Now, even he isn’t reading it anymore. I’ve tried to get into it. I like the art and some of the pop culture references are funny, but it’s kind of boring. It’s lost its spark.