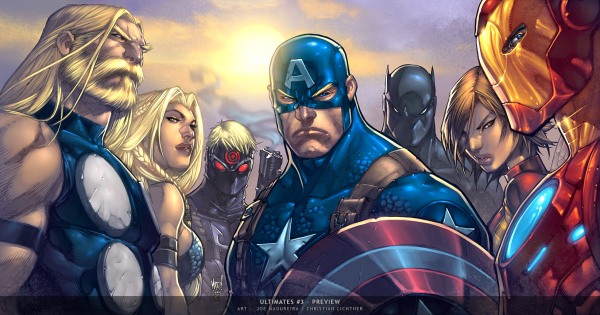 This, despite the awfulness of the last four issues, was a fairly decent comic. In fact, without actually going back to reread the last four issues, I will tentatively say that issue #5 of the Ultimates 3 “mayhaps” redeems this mini-series, if not Jeph Loeb’s entire comic book writing career.

Whoa. Did you read that right? FYI, I also liked Hulk #6.

Ultimates 3 pays off story threads originally setup by Millar way back in Ultimates 1, namely the Ultron subplot. I love me some Ultron, perhaps that’s why I’m satisfied with the way this story ended… I just kind of wish he’d gotten to the point of it all 2-3 issues sooner. But, it’s a mystery and this is how these things go. Confusion follows confusion followed by more confusion and then BOOM! Startling revelations! I’ve been watching a ton of Thin Man lately. I know things.

To his credit, Loeb doesn’t make us wait until the end for the recap-revelations, he feeds it to us within the first couple of pages:

• Ultron replaced the Ultimates body snatcher style with android duplicates!
• The Scarlet Witch’s murder was a crime of passion… gross.
• The butler did it! (serious lol’ing right there folks.)
• Captain America was the Black Panther THE WHOLE TIME! (Well, this isn’t really explained but I’m sure Loeb’ll get to it in the forthcoming Ultimate Captain America Annual.)
• Dr. Doom was behind it all?!? (Does this mean Doom is involved in Ultimatum? I may have to revise my Celestial theory.)
• Somehow, The Wasp stopped being Asian!!!

Plain and simple, this was a fantastically enjoyable read. We got answers and they were satisfying. To me, at least. Oh, there’s War Machine! And Quicksilver dies! That was sweet. And Hank redeems himself! Okay, sort of. Cap still hates him but apparently the Wasp is ready to get remarried to the schizophrenic wife-beater. Crazy broad…

…why is Janet always written this way? Why can’t she be a real person? This sexist “ditzy dame” garbage just doesn’t cut it anymore, Marvel writers. Maybe you guys could learn a thing or two from the guys over at DC who know how to write female leads. Strong women are WAY sexier than damsels. Anyway…

How does this story sync up with Ultimatum? I don’t know, but all of a sudden I’m excited about it! Also, does anyone else think that the planned/cancelled/rescheduled Ultimates 4 is actually Ultimatum in disguise? Or was this announced somewhere already? Am I behind the curve?

Just about the only thing that still bugs me about this version of the Ultimates (my problem with Janet doesn’t count since she’s written that way in ALL versions of the Avengers) is the characterization of Hawkeye. LAME. I understand the guy has a death wish. Fine. But Loeb has him acting more like a spoiled brat than a man on the edge. Make him desperate, but not too desperate. Cut the melodrama, dude. It’s unnecessary.

Oh, and the art looks better. But the coloring still sucks. DCBS sent me the “Ultron Variant”, which I have to say as a fan of all things Sci-Fi/Horror kicks the crap out of the regular cover. “Terminator” Cap is the complete filth, do you not agree? 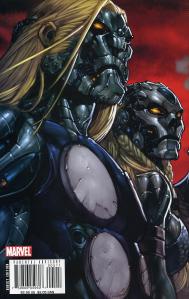 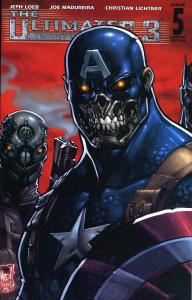 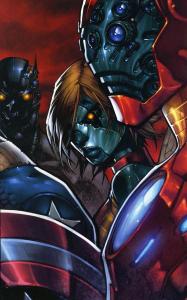 Ultimates 3 was lame and stupid most of the time, and in no way lives up to the epics that preceded it, but it was also fun. It was the “ultimate” funnybook. I think that above all else (including pretentious pretendering) shouldn’t comics be fun?