Welcome to another installment of Billy & Mandy’s series review of Planetary, the best book you’ve never read about super hero books! We’ll be reviewing each and every issue, beginning with #1 and plowing all the way through to #27, whenever the hell that bastard ships. If you’re just joining us, it’s not too late to get on the ground floor. You can find the previous installmenst here.

Mandy: This is a flashback story. We’re in 1997. There’s another third man, Ambrose Chase… I recognize this name? Is there a reason for that? Alright, so the mystery of the week is the return of a vessel from Planet Fiction. The only survivor? The Fictional Man!

Billy: So, thoughts on Ambrose Chase.

Mandy: Tell me first. Have we heard that name before?

Billy: I don’t know. I’ve read this series too many times to know with any certainty. 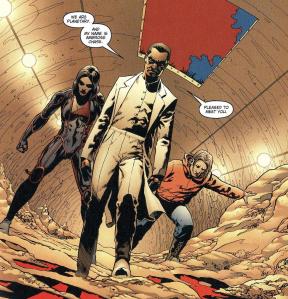 Billy: So, Ambrose is the sexy? Sexier than Doc Brass for you?

Mandy: Nothing can replace the sex that is Brass but, Ambrose is alright. 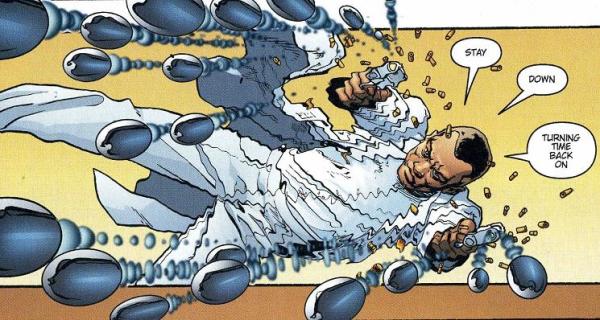 Mandy: He goes all “Matrix” there for a second. What’s the deal with that?

Billy: We’ll get to that, but first, I want to make the point that this issue, more so than maybe any other issue in the series, is totally obsessed with the meta of itself. What did you think of that?

Mandy: I know!!! There was a lot of stuff going on in there and like I told you earlier, I’m a little confused. It’s just so much!

Billy: What parts confused you? Issue #9 is one of those simple, yet surprisingly dense stories.

Mandy: No. I think that’s why. I think that possibly I was confused by its simplicity. But also, I don’t know enough about comics to get all the meta-ness of it.

Billy: Okay, let me try to explain as best as I can. One of the ideas that Ellis is expressing here is the ultimately unfulfilling nature of work-for-hire… I think. Like, contract writers/artists for The Big Two, Marvel and DC, often seek 4-color immortality through the creation of works that are not their own, right? This is why some creators stay on books like X-Men or Superman for years, gaining fame and fortune in the relatively tiny community that is comics. But, most of these same creators never actually create anything original. No original characters they own and no original books where they retain the copyright. They mostly just rehash old stories and perform surgical, as well as disastrous, retcons. And, when their run is finished, the next guy to come onto the book will usually cast aside any and all changes the previous creative team made and then proceed to make their own changes that will inevitably be reversed by another creative team. So, Ellis obviously feels writing someone else’s ideas is a foolish and, in Planetary, an ultimately deadly endeavor. For example, the “firing” of the creative team behind “Planet Fiction”.

Mandy: Yeah, I can see that. It’s better to work on your own stuff, because no matter what at least your editor won’t kill you.

Billy: At least, that’s what I got from my 20th reading of this comic. I tried to do research on this issue, to look up other people’s reviews and I soon realized that there is a dearth of reviews for this series on the net. Weird.

Mandy: It doesn’t really pre-date the internet. So, that kind of doesn’t make sense.

Billy: The later issues are around, like 25 and 26, but past that it’s the badlands, man. It probably has something to do with the perpetual lateness of the book. People just get tired of waiting.

Mandy: Moving On? Good. Dude! There’s a secret government program that designed and then created its own fictional universe! Which, is weird, since if it exists, is it really fictional? Which, I guess is the point, right?

Billy: Yeah, because it’s not a fictional world. It’s a brand new ecosystem and I guess you could say they just happen to base it on comic books. It could have been based on movies or literature or myths or whatever.

Mandy: Yeah, that is pretty sick. I want to move there.

Billy: Which is something Grant Morrison (the guy this is dedicated to) has dabbled with on more than one occasion: The Invisibles, The Filth, etc… this is also where the “bullet time” thing comes back. Ambrose is conceptually one of Morrison’s characters that Ellis is using here. It’s a character that predates “The Matrix”, so if there are any similarities, it’s not because those ideas were stolen from that movie. Oh, what’s also interesting is that I don’t think there exists another such dedication in the rest of the series… but I could be wrong. 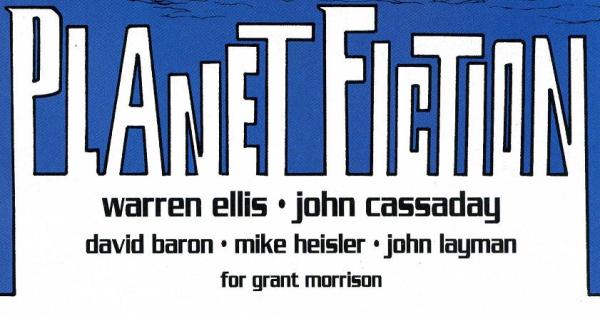 Billy: It’s a really cool concept and the name sounds epic in its campyness.

Mandy: I really like Planetary but I feel like I’m going to have to read it ten more times.

Billy: Yean; you do have to read it all at least twice. Maybe, three times.

Mandy: Billy. I don’t have the time!

Billy: As long as I’m on the subject of allusions, the farmhouse in the beginning of the book, the one with the spaceship in it? I think it’s obvious that the similarity to the origin story of Superman is intentional. Also, the spaceship itself could be a reference to the original Legion of Superheroes.

Mandy: I got the Superman reference, but not the Legion of Superguys one. Who are they?

Billy: Heh, it doesn’t matter. Okay, let’s move. What was your favorite part? Mine was when Jakita opens the door and is like, “Oh SHI-”

Billy: Definitely had that “Star Wars” feel, that scene where Han Solo rounds the corner on the Death Star only to come face to face with a gaggle of Storm Troopers.

Mandy: Yeah, that was awesome. I’m not surprised. You love her. She is always your favorite.

Billy: Wait, actually, all the Jakita action stuff was cool this time! And every time!

Billy: What was your favorite part?

Mandy: Chase is so bad ass. I love when he tells Drums, “Keep your head down. Things are gonna get ugly.” 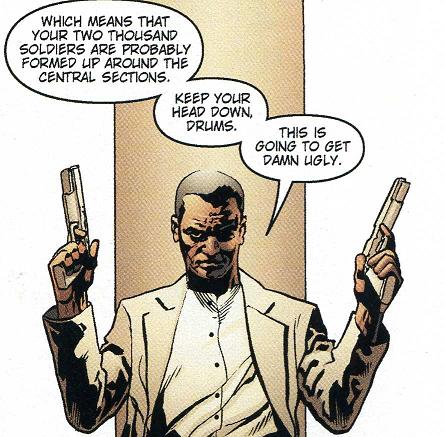 Mandy: And like, Jakita in the last panel with the one tear but she’s still all business.

Billy: “We’ll dig you up and work it all out in a couple of years.” Too awesome. 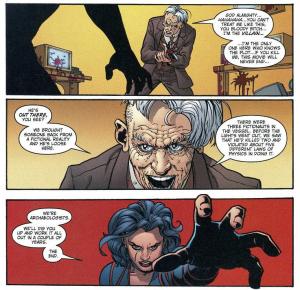 Billy: So, the creepy head scientist guy reveals that this project is actually headed by Dowling. Man, that guy is into everything.

Billy: By the way, “Fictionaut” is the coolest made up word of all-time.

Mandy: and I agree with you. FICTIONAUT. Good word. 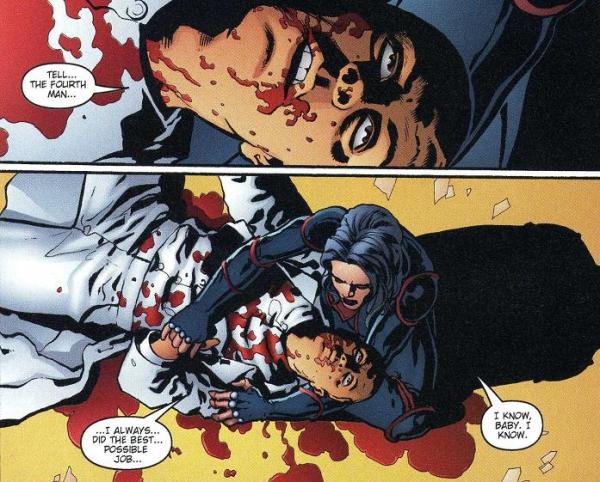 Billy: And what happened to Ambrose? HE disappeared, but we didn’t see him die.

Mandy: Yeah, so where did he go? Do we ever find out? 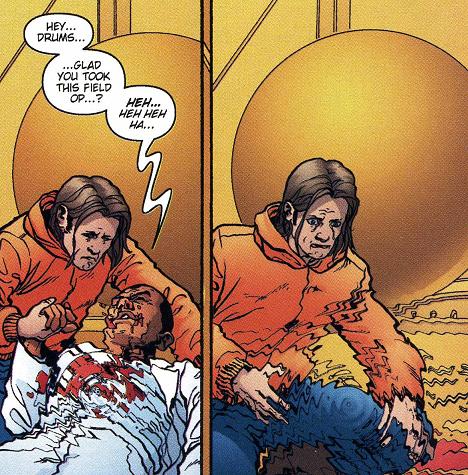 Billy: I don’t know. There’s only one issue left, #27, and we still haven’t heard from his reality warping ass.

Billy: I assume that the final issue will deal with Ambrose Chase and maybe the dude from Planet Fiction. I hope. I also hope that the lame Anna Mercury series Ellis is writing right now isn’t actually the manifestation of the Fictionaut idea that we’ve been waiting on since #9. That would be beyond suck.

Billy: It’s a book about a secret government program that sends real people into fictional worlds.

Billy: Anyway… at the end of the book we are presented with a number of questions, probably because Ellis knew how confusing the entire series has been up to this point and that we as the audience needed something to latch onto, and the most important question has to be “Who is the fourth man?” So, who do you think it is? Or have we not even met this person yet? Could it be Anna Hark? Running things from the shadows? 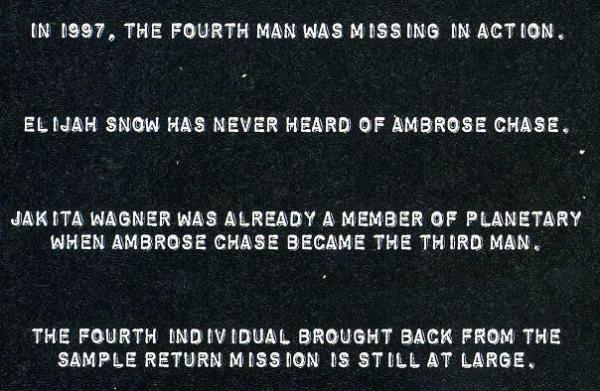 Billy: Your love for her is disturbing.

Billy: Oh, maybe it’s Dowling himself! Maybe he’s not as evil as we are led to believe? Maybe he’s trying to take down the Four without them catching on? Makes sense that Planetary would find the Planet Fiction program if Dowling was the one to give up the info. Not to mention facilitating their access to Island Zero, Four Voyagers Plaza, etc…

Mandy: Dude, if it’s Dowling himself, it just compounds the confusion of trying to figure out who the good guys are. I never trusted Planetary. Not in the beginning anyway.

Billy: Obviously, I’m full of shit because I do know.

Mandy: Then who is it?

Join us next time when Planetary fails to discover the secret origins of the heroes that never were! If you haven’t read Planetary, you can pick up the trades at your local shop or order them online from Amazon.com at the following link: