Welcome to another installment of Billy & Mandy’s weekly series review of Planetary, the best book you’ve never read about the super hero genre! We’ll be reviewing each and every issue, beginning at #1 all the way through to #27, whenever the hell that bastard ships. If you’re just joining us, it’s not too late to get on the ground floor. You can find last week’s review here.

Mandy: OKAY. SOUNDS GOOD. LET ME TURN THE LIGHT ON. I thought that this Planetary was a little confusing.

Mandy: YEAH, NO BRAIN SHITBIRD. Except it was like Bones… that Snoop Dogg movie.

Billy: I’ve never seen that one.

Mandy: So we open on a street in Hong Kong. Some shady shit is going down – whores dying and drugs being selled. The bad guys are escaping but trouble’s afoot – the ghosty badged kind of trouble. Ghost cop shoots up the getaway car which the driver promptly drives into a phone poll. It’s very clear that the cop is a ghost and here are our friends from Planetary. They’ve witnessed the whole thing. Snow, for one, is quite amazed to learn that the Phantom Cop of Hong Kong that he’s heard about is REAL! WOOO. I mean, but seriously, Snow: are things still surprising you? And of course, The Drummer is just amazing… as usual.

Billy: Snow’s like Frodo in that way. Shit hasn’t gotten “real” yet.

Mandy: I KNOW. Forget the fact that he is himself REALLY OLD and yet NOT DEAD and also that he has POWERS. That is all normal but everything else is like OMG FREAKSHOW.

Billy: I love the way Cassaday rendered the ghost cop. Perfection. Well, there must be something wrong with his memory then, right?

Mandy: MAYBE! So the crew rolls up on Planetary headquarters in Hong Kong and we learn that Planetary is at least six years old. News to Jakita!

Billy: And we learn more about Drummer and Snow’s powers. What did you think of the “hard drive of souls”? 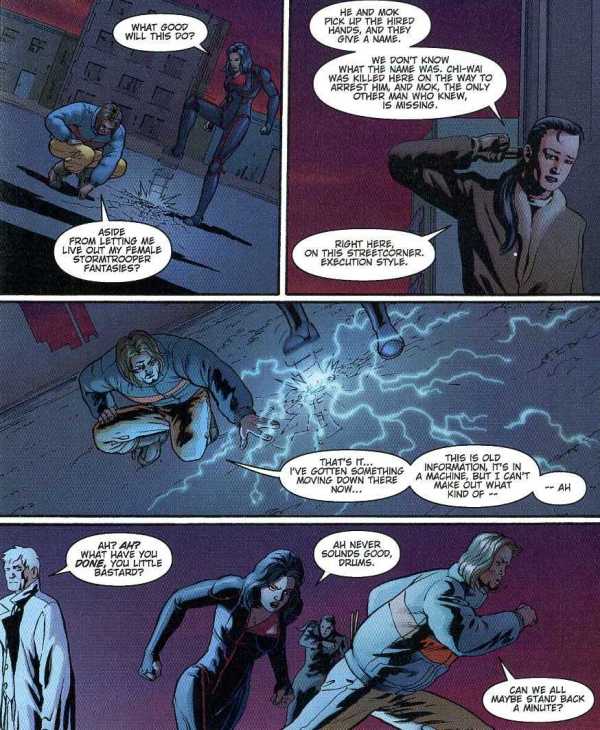 Mandy: Okay, so are we talking about it now? No longer requiring a whole recap of the issue?

Billy: We can just get into it here.

Mandy: That was the explosion from the earth, right?

Billy: What exactly confused you? Did you get that it was related to the snowflake from the first issue?

Mandy: Yeah, I did. I got that when The Drummer threw out that number. But the snowflake confused me too so this just added to my confusion.

Billy: So this issue is pretty straight forward with its themes: Vengeance and Purpose. How do you think that relates to our heroes?

Mandy: Well it’s funny… our heroes essentially have no idea who they work for and at this point, neither do we, so there’s always those questions: are they good guys or are they bad guys? Is there even such a thing? Will we ever know which is which?

Billy: It’s all on that page where he talks about how no one understands better than a betrayed Hong Kong Cop.

Mandy: Yeah. His purpose is vengeance because there is no greater power… no punishment or afterlife. I think that idea sort of points to but at the same time undercuts the very idea of Planetary. I don’t know if I’m explaining my thoughts correctly but at the end, when he says “Just us” and Drummer mishears it as “Justice”, I think that alludes to their internal conflict. In order to do what they do, they have to believe that what they are doing is right thing but at the same time, how can they be sure if they don’t know who they work for?

Billy: Yeah, it’s almost impossible to see now, and this issue seems like one of those throwaway episodes, but this issue is a very specific and clever metaphor for the purpose of the entire series and a brilliant foreshadow of Snow’s journey. Just keep it in mind as we move forward from here.

Mandy: I resisted the urge to think of it as a throw-away. You don’t throw away a line like “Justice”/”Just us” on a one-off with no point, right?

Billy: Yeah, definitely don’t do that.

Billy: This is one of the best issues of the run too, almost because it’s so clean. Any other thoughts before we close it out? Or questions? UGH, I can’t really explain the hard drive to you because it would spoil a bunch of stuff for later.

Mandy: Yeah, don’t. We’ll get there and then I’ll be like OH YEAH.

Billy: Not posting that!

Join us next Monday as we uncover one of the most important elements in the Planetary mythology. If you haven’t read Planetary, you can pick up the trades at your local shop or order them online from Amazon.com at the following link: